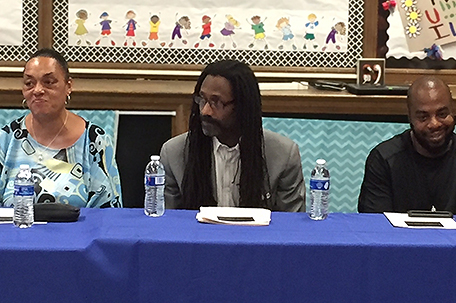 The event was organized by Dana Frye Thomson and Ashley Carmichael, co-founders of “Men of Frederick Douglass.”

Panelists were asked a series of questions, ranging from what are the misconceptions about residents of the community, to common misperceptions about the Philadelphia Police Department and how students can maintain cultural identity yet still have a positive view of law enforcement.

“Our schools are neighborhood schools that are strongly connected to the community,” said Mastery Charter School’s CEO, Scott Gordon. Gordon said Mastery Charter Schools are constantly looking for ways to advance the bond between the schools, communities and law enforcement. “As a white man, my experiences with law enforcement are very different than my students. One of the things we did at Simon Gratz was to develop a student support team that began building personal relationships with local police officers. It changed everything. Gratz is in a high crime area and when something happens that will affect the school, students are now willing to talk with police because they have personal relationships with them.” 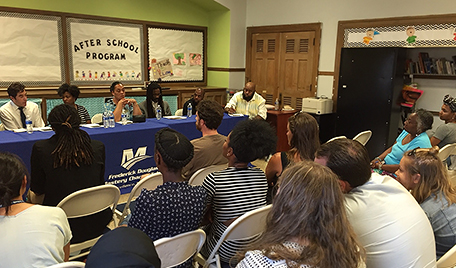 hen asked what residents and teachers could do to nurture better relations between communities and police, defense attorney Michael Coard said activities at the schools are fine.

But he pointed out they’re secondary. Stigmas, barriers and misperceptions on both sides won’t change quickly and the strategy to foster those changes doesn’t exist, yet.

“What has to be done has to be created because right now it doesn’t exist,” Coard said. “Yes, there’s Internal Affairs and the Police Advisory Commission. However, the Advisory Commission has no subpoena powers. What has to happen is that teachers and students have to learn how to influence the legislature. For that to happen, teachers have to be more than just nine-to-five employees. The only way for things to change is for the community to empower itself and come up with innovative strategies.”

“We need a space in which we can bring healing to the community which is so desperately needed. We need to provide an opportunity so that we can begin to humanize our police officers and view them as vital stakeholders in our community,” Davidson said. “This is something that I, Dana Frye-Thompson Ashley Carmichael, co-founders of Men of Frederick Douglass are committed to continuing throughout the year. This will continue on the first day of school, where we are asking community members and police officers to welcome and greet our students on their first day of school on August 22nd. We recognize that the first day of school can produce anxiety and stress for teachers, students, and parents. We want to combat those feelings, and have our first day of school be one of joy and building a sense of pride. In the near future, the school will be hosting similar meetings to foster continued conversations between police and the communities they serve.”