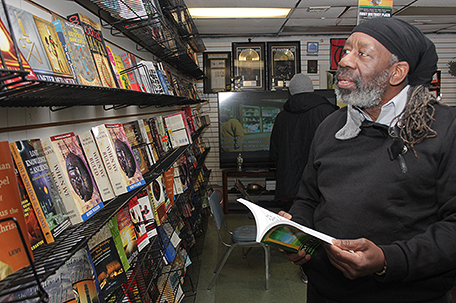 I grew up in Harlem, and one of the fondest memories I had growing up was my father taking my twin sister and I to 125th Street to a large store with a bunch of crazy signs and posters outside. Signs like “Repatriation Headquarters – Back to Africa Movement – Recruiting – Register Here!” Posters like “Get Away Jordan. Let Gods Chullon By.”

To my little 4-year-old mind there seemed to be a million books in the store, but it wasn’t until much later that I realized it was actually a bookstore. A pretty well-known bookstore, at that. – The famous Michaux Bookstore, frequented by the likes of Malcolm X, and Eldridge Cleaver.

But if you had asked me back then, I would have said it was a place for my father to hangout and talk to a bunch of guys about politics, history, and about Crayola having a crayon called “Flesh” that didn’t look like our flesh at all.

When I moved to Philadelphia, I was ecstatic to find there were other bookstores like that here. Bookstores like Hakim’s Bookstore on 52nd Street, where the owner, Dawud Hakim, would sit and talk to teens about respect, and self-awareness, and made sure that they all knew who Carter G. Woodson (“He’s the man who lobbied for the schools to teach you all Black History”), W.E.B. DuBois was (“He was a great man who went to Harvard, and helped start the NAACP.”), and the Rev. Dr. Martin Luther King, Jr. were (“I don’t even want to hear you not knowing about him.”)

Hakim also made sure that the parents of those children, knew about the Countering the Conspiracy to Destroy Black Boys series written by Dr. Jawanza Kunjufu when they came to his store. He’d talk to them for a few minutes – or a few hours, if they had the time – and then he’d go into the back of the store and do their taxes if was needed.

“There was a little tiny black bookstore in the Gallery that I used to go to all the time, when I was a teenager,” said Rosalyn McDaniel, an attorney who lives Mt. Airy. “I never knew what I wanted, but that was okay, because the woman who owned the store must have been psychic or something. The first book she recommended to me was Flyy Girl by Omar Tyree, and I remember she was also the one who turned me onto Diane McKinney.”

Basic Black Books was the name of the store, and the owners were not only helpful to readers, but to authors, also.

I self-published my first novel, “Satin Doll,” in 1999 and as any self-published author will tell you – if you want to sell, you’ve got to get on bookshelves. But the problem was it darn near impossible at that time to get into a chain store unless you had a major publisher behind you, or you already had a proven sales record. But, of course, it’s hard to get a sales record if stores won’t carry your books.

I remember walking into Basic Black Books and introducing myself to Lecia Warner Bickerstaff, who owned the store with her husband, Joel. I had 10 copies of Satin Doll with me, and Lecia said she’d take five and see how they sold before ordering more. Two days later I got a call from her. She’d read “Satin Doll,” loved it, and wanted more copies.

PHOTO:  Dawud Hakim, owner of Hakim’s Bookstore, in a picture taken in the 1970s.  (Photo by Yvonne Blake)

“I’ve been telling all of my customers about it. Can you bring me 15 more?” she said.

Well, she kept on recommending it; and within three months Basic Black Books had sold more than 300 copies of my debut novel. And it was because of them, and other African-American bookstores that my books are now carried in major chain stores nationwide as well as on Amazon.com

But I wasn’t the only author helped by African-American bookstores.

“There’s probably not any self-published author who made it to a major publisher who didn’t do it without the help of the black bookstores,” said Linda Duggins, director of publicity for Grand Central Publishing.

Many people may not remember, but New York Times bestselling authors like E. Lynn Harris, Omar Tyree, and Kimberla Lawson Roby all self-published their first books.

“It was the black bookstores that got them the recognition to be known throughout the country,” said Duggins. “It was through their efforts that we were all introduced to these authors.”

Basic Black Books is no longer in the Gallery. It closed down in 2003, and was replaced by another African-American bookstore, Horizon Books, which closed earlier this year. Liguorius Books, which opened in the Cheltenham Mall in the mid 1970s shut their doors in 2006. Know Thyself Bookstore and Cultural Center, which was owned by poet and social activist Del Jones and Brother Deke is also a thing of the past, as is La Unique African-American Bookstore which was the only African-American owned bookstore in Camden.

But it’s not the Philadelphia area African-American bookstores that have fallen to the wayside, said Troy Johnson, creator and founder of the African-American Literature Book Club website, better known as AALBC.com.

“African-American bookstores have taken a huge hit because of the super chains like Barnes and Noble, and online superstores like Amazon.com,” said Johnson, who has been tracking African-American publishing since 1998. “Just 10 years ago there were five times as many bookstores nationwide than there are now.”

Johnson, who operates in Harlem, said most African-American bookstores could not compete with the deep discounts offered by the new competitors, and so people started shopping elsewhere.

“These bookstores served not only as establishment that sold books, but also a place where conscious people could meet and discuss various matters affecting the community, and could exchange ideas,” Johnson explains. “African-American bookstores were places that facilitated deep thought and discussions. It’s a shame to see them go.”

“I buy all my books at African-American bookstores, and always have,” Bryant said. “I think it’s important to support black businesses, so I do.”

Bryant, who has a PhD in Social Work said even as a student he only used white-owned bookstores to get text books. When asked if the college bookstores carried African-American books, Bryant said he didn’t know.

“I never thought to ask, because I wasn’t going to buy them there,” Bryant said with a deep chuckle. “Their focus is not my focus. Never was, and never will be.”

Bryant said he now buys most of his books at Black and Nobel Bookstore, located on Erie Avenue in North Philadelphia.

Hakim Hopkins, the owner, started out as book vendor and opened his store in 2003. It’s a testament to his business acumen that while African-American bookstores all over the country have been struggling to survive, he actually expanded his store last year.

Black and Nobel stocks a variety of books – from novels to non-fiction; from street-lit to religious texts. The store, which has a strong online presence, also ships books to prisons and correctional facilities.

Black and Nobel is one of only two African-American bookstores left in Philadelphia. The other is Hakim’s Bookstore, which I mentioned much earlier in this article.

Dawud Hakim died in 1997,  but one of his last wishes – according to his daughter Yvonne Blake – was that the family keep the store open as long as possible. Blake and her sister, Davita Butler, manage the store which is now open only on Fridays and Saturdays.

“My dad’s been dead for 17 years, and my sister and I fully intend to honor his wish, but it’s been hard,” said Blake, who is 63. “The unfortunate thing is that we will likely have to close in another year or so.”

Blake, who is 63, explained that her mother is extremely ill, and she and sister have are struggling to take care of her and also run the business. Sometimes they can get other family members to staff the bookstore, but not always. And there’s simply not enough money to hire full-time clerks.

“We have some very long-time customers who still come by when we’re open, but our overall customer base has dwindled significantly,” Blake said. “We can hope for a miracle, but unless one comes soon, the store will have to be closed permanently.”

Johnson, who keeps track of the opening and closing of African-American bookstores, said he is saddened by possible closure of Hakim’s Bookstore, and wished more people in the African-American community were also.

“There’s hardly any discussion about it all, and practically no coverage about the situation in the media. I get the impression that people really don’t stress themselves about it.” Johnson said in a resigned voice. “If they did care, the African-American bookstore might still be viable.”