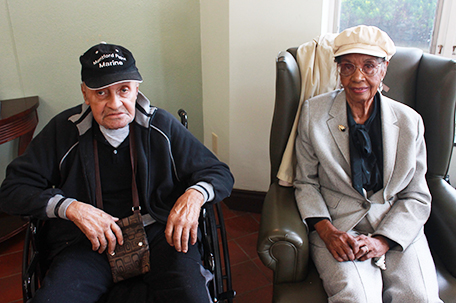 ABOVE PHOTO:Mr. Snowden and wife Louise

Veterans are an integral part of what makes this country amazing: they have risked their lives on a regular basis since the creation of what we now call America to make sure citizens of all backgrounds are safe.  Each year, we celebrate veterans through days off and ceremonies, but what about the underdogs who rarely get credit?

Former Marine Sergeant Thomas W. Snowden knows all about flying under the radar and not getting credit for his hard work as he served in the ammunition unit as a Montford Point Marine, the first Black Marine corps in the nation.  As his wife Louise showed off a sepia-toned picture of him decked in his uniform circa 1943, they are taken back to a time when the country wasn’t so progressive.

“We knew real discrimination then. I was discriminated against right here in Philadelphia,” Mrs. Snowden recalls as her husband sits by her side.  They both tell of the conditions Mr. Snowden faced while stationed in Jacksonville, North Carolina.  “First thing we built down there was a person,” Mr. Snowden jokes as he reminisces on camp.  These legendary men did not have the same living conditions as their counterparts at Camp Lejeune, as they were made to rebuild the area, cutting down trees and dodging snakes just to pitch tents and sleep in the mud. 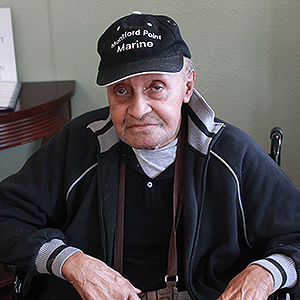 His early life was spent in Philadelphia, where he was born and raised.  He learned carpentry from his father, and his hobbies included building and drawing.  After he returned from service, he attended Temple University for a degree in Architecture, studying at night and working during the day.

Mr. Snowden, now 94 years old, is hard of hearing and soft spoken, so his lovely and valiant wife assists in recounting his time spent serving his country, even if it didn’t love him back.  He served eight years, a year of that time spent in the reserves for the Korean War.  Mr. Snowden traveled throughout the South Pacific, fighting in Iwo Jima and Guam, during WWII.  When discussing what he enjoyed most about service, Mr. Snowden talks about when he was made sergeant, although his proudest moment came in 2014 as the Obama Administration awarded him and 400 other men the Congressional Medal of Honor, the highest honor any veteran can receive.  And of course, his wife Louise was right by his side.

When asked how she coped while waiting for her husband to return, Mrs. Snowden says she kept busy playing golf, cleaning their place, going to church, and visiting her mother.  Married 69 years June 12, her support of her husband is evident. “I will support him ‘till death do us part,” she said.  Her advice to married couples is simple.  “People are married for two minutes today.  You have to remember you’re two different people, and that it’s 50/50.  Love, caring for each other, and communication will help you last longer than two minutes,” she said.  Witnessing the Snowdens’ love is like standing outside on a hot day, just letting the rays kiss your skin–a warm, joyous feeling.  Mr. Snowden grabs her hand at one point as we are talking, a simple yet heartfelt gesture to let her know he is attentive and open to her energy.

Mr. Snowden is this month’s National Federation of Black Veterans “Victory Crown Medal” honoree.  They will award him with a ceremony at his hospice facility in Chestnut Hill.  Focusing on honoring, educating and uplifting Black veterans, there couldn’t be a more fitting time for Mr. Snowden to be honored, as good things definitely come to those who wait.  We thank you for your service in celebration of this Memorial Day Mr. Snowden.