‘Meet a Candidate: A conversation with Larry Krasner’ draws over 100 attendees 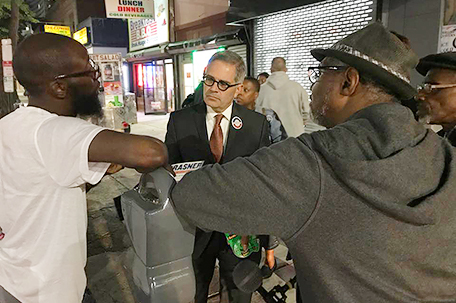 The candidate answered questions in a frank, open forum, one of many such events held in the waning days of the 2017 general election campaign season

In a few days, Philadelphia selects its next district attorney.

The City’s next DA not only has to grapple with a demoralized staff and a skeptical public, but also with a myriad of criminal justice policy issues and questionable practices that still need to be addressed.

During one of many campaign events held over the last few weeks leading up to Tuesday’s election — a Q &A session entitled “Meet a Candidate: A Conversation with Larry Krasner” — voters were given a chance to ask questions and voice their concerns.

The event — held at the Arch Street United Methodist Church in Center City — was sponsored by Huddle Up Philly, Millennials in Action, My Family Votes, Philly Up, Philly Women Rally, Inc., POWER, The People United USA, Women in POWER, and many other organizations.

Organizers of the event invited both DA candidates to participate. Although both candidates accepted the invitation to speak, Republican candidate Beth Grossman had to cancel due to a scheduling conflict.

In his opening statement, Krasner said that last spring’s primary was an “election by movement.”

Institutional bias — which directly affects outcomes — must also be seriously addressed, something Williams refused to do, he said.

One of the moderators — Emma Tramble of My Family Votes — asked Krasner on how he planned to handle issues surrounding mass incarceration.

In his response, Krasner cited statistics that stated how incarceration affects one in every three Black men, but only one in every 17 White men, among other populations.

Unfortunately, many Philadelphians who have never had a family member go to jail, have no crime victims or law enforcement officers in their family, or any interaction with the criminal justice system except for “Law and Order” or the news are unaware of how endemic this problem is in the African-American community, Krasner said.

He also pointed out that 27 percent of Pennsylvania’s state prison inmates come from Philadelphia, and that the Commonwealth currently has a legislature that is motivated by their desire for funding.

The United States Census counts people in the county where they are incarcerated, not the county from which they orginate. This, in turn, boosts population numbers and creates a cynical mass incarceration incentive which benefits legislators in terms of gerrymandering and federal funding, he said.

Reasonable sentencing guidelines — which are suggestions, for the most part — need to be considered in reforming this practice, Krasner said.

When asked by an audience member about his commitment to fighting for victim’s rights, Krasner ensured that anyone affected by crime — including non-violent ‘white collar crime’ victims, such as those who experience identity theft — would be a priority to him as DA.

Another audience member’s question inquired about Krasner’s views on the “stop and frisk” program. He responded by pointing out that only one out of 400 stop and frisks uncover criminal behavior.

We need to identify patterns of corruption and to end “Rudy Giuliani-style” stop and frisk tactics in Philadelphia, he said.

The issue of accountability in the DA’s office was also raised, especially in light of recent events.

Krasner said that he is “not afraid” to face a performance review style ‘report card’ that is honest and frank. He also said that he is committed to “weeding out” corrupt police officers, especially those commit perjury, criminal behavior which he personally finds repulsive. He also mentioned a commitment to increasing diversity in the office.

Krasner was also asked about whether he would consider reinstatement of the juvenile curfew program instituted under former mayor John Street if he is elected DA.

Although he agreed with the concept in general, the candidate responded that respect had to be earned, both by the DA’s office and the police due to past corruption.

Krasner said that the focus should be on reform for young offenders and that more experienced attorneys are needed to handle juvenile cases, as opposed to less experienced public defenders.

Many other questions were asked over the course of the two-hour event, which was attended by over 100 people.

In his concluding remarks, Krasner attributed his primary win to a new era in which the increased influence of activists and organizers — especially that of young, verbal supporters — is changing the landscape and making a difference on the political stage.

It is not just about a candidate, but more about a movement with a candidate attached to it, a model which he thinks can be duplicated around the country, Krasner said.