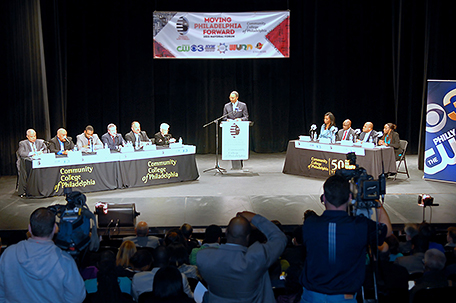 On Thursday, April 9th, the Moving Philadelphia Forward Mayoral Forum, hosted by the Philadelphia Association of Black Journalists and Community College of Philadelphia was held at the college.  Each of the six Democratic mayoral candidates was in attendance and was asked a series of questions about how they would govern the city.  With a focus on the concerns of the city’s working class, the topics of the questions focused mainly on education, police accountability poverty, gentrification and affordable housing, and the issues of ex- offenders.  Moderated by CBS 3’s Ukee Washington, questions were asked by journalists Jenice Armstrong of The Philadelphia Daily News, Solomon Jones of 900AM WURD, Irv Randolph of The Philadelphia Tribune, and student journalist Aminata Sy.  Each candidate was allotted a total of a minute and 30 seconds to answer each question and 30 seconds for two lightning round questions.

All candidates appealed to the audience’s emotions as they spoke with conviction and some even threw jabs at each other. It was a forum that offered many opinions on what each candidate believes would be the best way to run the city of Philadelphia.

The first question asked dealt with poverty with all of the candidates choosing to tackle the matter through education.  They all said that Philadelphia’s educational system was in dire need of a facelift with primary education taking the forefront.  Nelson Diaz wants the SRC to be abolished, allowing more parent participation in the school system, while Lynne Abraham called on Gov. Tom Wolf to rally for Philadelphians in Harrisburg.

This event was informative, but lacked the meat that it really needed.  We couldn’t get much of a flavor of the candidates’ stances on issues because of the stunted format but also because they appealed to what they believe the public wants to hear.  It is hard to determine who the front runner will be in this race.  Milton Street took a few stabs at former City Councilman Kenney, and Doug towards the oldheads in the race but other than that, it lacked color.  Until May 19th, I advise everyone to keep their eyes and ears open as it is around the corner.