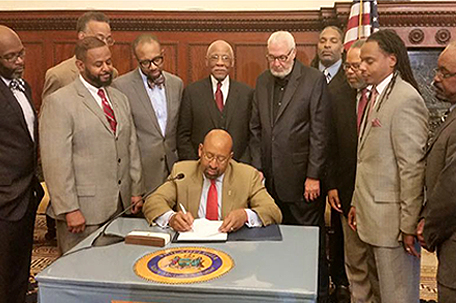 ABOVE PHOTO:  Mayor Nutter signs the legislation update to the Fair Criminal Screening Standards Ordinance surrounded by members of City Council, and other Philadelphia community leaders.  (Photo: City of Philadelphia)

Mayor Michael A. Nutter signed an update to the Fair Criminal Screening Standards Ordinance, known as Ban the Box, and an Executive Order on background checks for City employment at a Signing Ceremony today.  This legislation helps strengthen anti-discrimination protections for returning citizens seeking employment with the City and with public and private businesses.

“Ban the Box gives returning citizens the second chance they deserve by reducing a major barrier to employment.  When it took effect in 2012, it was a cutting edge policy.  But, we’ve learned that it can be more targeted,” said Mayor Nutter.  “By expanding the original scope of the Ordinance and putting in place checks that encourage employers to consider the whole person and the gravity of the offense, we can better support returning citizens and their transition back into the working world.  Everyone deserves an opportunity to work and to provide for their families and should not be discriminated against because of previous bad decisions.”

The Ordinance prohibits City agencies and private employers, with at least one employee, from inquiring about criminal background and arrests on the application for a position. The employer may perform a background check following a conditional offer of employment.  Should a background check reveal a criminal conviction within the last seven years (excluding periods of incarceration), the employer must consider the nature of the crime, the time that has passed since the offense and the duties of the job when determining whether to offer employment.

“The Ban the Box legislation includes common sense amendments that make it easier for returning citizens to find employment,” said Councilman Curtis Jones, Jr., sponsor of the update.  “It has been proven time and time again that if returning citizens have steady employment they are less likely to commit crimes again and this legislation will help them do that.  I am grateful to Mayor Nutter for his strong support of this legislation.”

Other key provisions in the Ordinance’s update include:

•  Employers may conduct a criminal background check only after a conditional offer of employment has been made.

•  The Ordinance is applicable to all employers, public and private, with one or more employees.

•  Employers must consider guidelines when determining whether to disqualify an applicant on the basis of his or her criminal record.

•  An employer can only examine a criminal record going back seven years, excluding periods of incarceration.

•  Employers must notify the applicant in writing if they are rejected and provide the applicant with a copy of the criminal history report.

•  Applicants have 10 business days following the rejection to provide evidence of an inaccuracy on the report or to provide an explanation.

•  Applicants have 300 calendar days to file a complaint with the Philadelphia Commission on Human Relations.

“Discrimination against people with criminal records still happens every day.  This legislation will open doors to employment opportunities for thousands of Philadelphians who are trying to make better lives for themselves as they struggle to overcome poor choices in the past,” said Rue Landau, Executive Director of the Philadelphia Commission on Human Relations, the agency charged with enforcing the law.  “It also provides employers with a potential new workforce of qualified, hardworking people who have rehabilitated themselves and simply want a chance to prove themselves and earn a paycheck.”