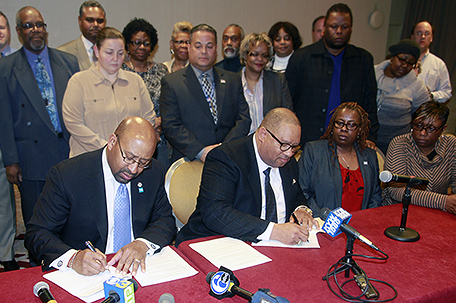 ABOVE PHOTO: AFSCME District Council 47 reached a tentative agreement with the city, after being without a contract since 2009. Mayor Michael Nutter and District Council 47 President Fred Wright signed the documents on Tuesday at the Sheraton Hotel in Center City.  (Photo by H. Jaramogi)

The city of Philadelphia has reached a tentative agreement on a new contract with the union representing about 4,000 white-collar workers, ending a stalemate that dates back to 2009.

The accord announced Tuesday night by Mayor Michael Nutter and AFSCME District Council 47 must still be ratified by rank-and-file members.

The Philadelphia Inquirer reports that the pact is retroactive to 2009 and extends into mid-2017. It includes three wage increases and a $2,000 ratification bonus but no back pay for the years workers have gone without raises.

Union president Frederick Wright said the administration dropped its bid to get the right to furlough workers and put new workers into a hybrid pension plan with lower guaranteed benefits. But the city said employees’ share of pension costs will go up.