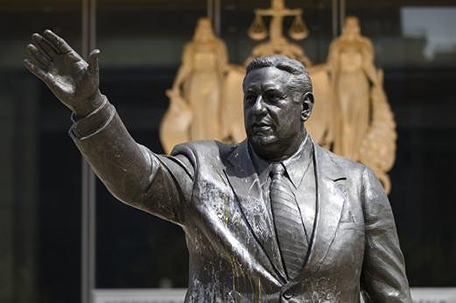 The mayor of Philadelphia says the city should discuss the future of a statue of one of his predecessors after reports of possible vandalism and a city councilwoman’s call for its removal.

Democratic Mayor Jim Kenney said Tuesday now is the “right time” for a conversation about the statue of Frank Rizzo, a former mayor and police commissioner who critics say reigned over the city when police brutality was the accepted norm.

The talk comes days after a violent white nationalist rally in Charlottesville, Virginia that was sparked by the planned removal of a Confederate statue of Gen. Robert E. Lee, and as cities and institutions across the country are tackling how to handle monuments linked to racism and other emotionally charged issues.

Philadelphia has long tried to reconcile the complicated legacy of Rizzo, who served as mayor from 1972 to 1980 and who died of a heart attack in 1991. His friends, family and fans remember him as a devoted public servant unafraid to speak his mind. His detractors saw his police force as corrupt and brutal and said Rizzo alienated minorities both as police commissioner and mayor.

On Monday, Democratic Councilwoman Helen Gym said on Twitter that the statue should be removed.

“All around the country, we’re fighting to remove the monuments to slavery and racism. Philly, we have work to do. Take the Rizzo statue down,” she tweeted.

She later said she would initiate a public process around the statue when the city council reconvenes in September.

Overnight, a sign reading “Shame on President Trump” was hung around the statue’s neck, and on Wednesday a man from Maplewood, New Jersey, was charged with disorderly conduct for throwing eggs at it earlier in the day.

The bronze statue, unveiled in 1999, depicts Rizzo bounding down the steps of the Municipal Services Building. It was donated to the city.

Calls to remove the statue aren’t new. A year ago, an anti-police brutality group launched an online petition to take the statue down.

A newly launched online petition to keep the statue in place gathered over 11,000 signatures by early Wednesday afternoon.

Rizzo’s son told KYW-TV Tuesday that his father was a fair person who treated people equally regardless of race.

“I never remember my dad being anything but a fair person. If you broke the law, no matter what color you were, he made sure Philadelphia was protected,” said the former Philadelphia city councilman. “And I would hope the decision makers realize Frank Rizzo should not be in the same conversation as a Confederate general.”