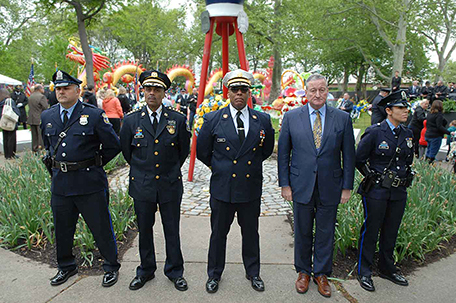 The Living Flame Memorial Service is designed to acknowledge the sacrifices of Philadelphia police officers and firefighters who died in the line of duty. 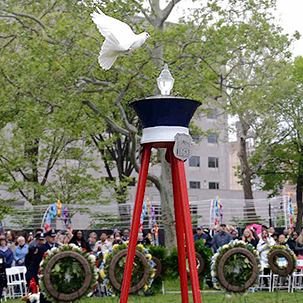 When doves fly….One of three doves takes flight today at Franklin Square Park at the close of the annual Police & Fire Living Flame Memorial Service to honor more than 500 police officers and firefighters who sacrificed their lives in service over the years. (Photo by Tony Webb, City of Philadelphia/ Office of the City Representative)

Mayor Kenney, Police Commissioner Richard Ross and Deputy Fire Commissioner Jesse Wilson reflectively addressed a crowd including family members and colleagues of fallen Philadelphia police officers and firefighters who have died over the years while in service to the City. They placed wreaths and red-and-white carnations at the Living Flame Memorial in Franklin Square Park. The names of deceased police officers and firefighters, who succumbed while serving the public, are inscribed on plaques on the circular three-pronged Living Flame Memorial monument in the park.

Since the last Living Flame Memorial in May 2015, one member of the Philadelphia Police Department – Officer Walter J. DeWitt III — has died in the line of duty. He was acknowledged in somber tributes and added to the monument. His name joined the respected roster of local deceased firefighters and police officers who are memorialized on the Living Flame Memorial in Franklin Square Park in Old City. 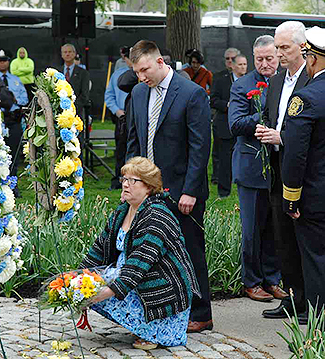 Family Tribute… Denise and Walter DeWitt IV, wife and son of Officer Walter DeWitt III, a 33-year veteran and highly decorated member of the Philadelphia Police Department, who died last June from complications of surgery after a work-related injury…pay their respects at the Living Flame Memorial Service today. (Photo by Tony Webb, City of Philadelphia/ Office of the City Representative)

Officer Walter DeWitt III, 55, a 33-year veteran and highly decorated member of the Philadelphia Police Department, died last June from complications of surgery after sustaining a recurring injury incurred during the line of service.  He suffered a shoulder injury in a patrol-car accident in 1995 and was reinjured in an accident at the Philadelphia Police Academy firing range in 2014 requiring surgery in 2015. He joined the force in 1982 and was assigned to the 35th District. He later moved to the 2nd District in 1991. His other assignments included the Police Highway Patrol Unit in 1998 and Traffic Division in 2004, before joining the Firearms Training Unit of the Philadelphia Police Academy in 2007. Over his career, Officer DeWitt was bestowed the Award for Heroism twice, received two Merit Awards and nine Commendation for his performance. A 1978 Lincoln High School graduate and Northeast Philadelphia resident, Officer DeWitt is survived by his wife, Denise, and son, Walter J. DeWitt IV.

City officials — led by Mayor Kenney, Managing Director Michael DiBerardinis (the program’s emcee), Police Commissioner Ross and Deputy Fire Commissioner Wilson — were joined by representatives from the families and colleagues of Officer DeWitt as well as survivors of other police and firefighters. Most of the families placed flowers at the monument during this annual day of remembrance.