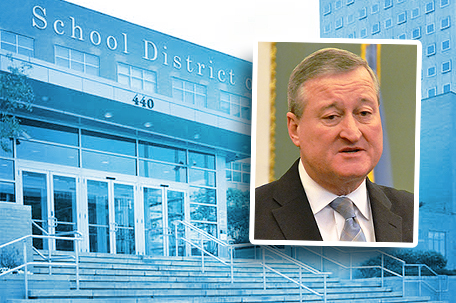 Dissolution of the School Reform Commission

On Thursday Nov. 2, Mayor Jim Kenney delivered an address, expressing his support for dissolving the SRC, returning to a Mayor-appointed board, and increasing school funding. The remarks as prepared are below. The administration also released a policy paper, which provides a detailed history of school governance in Philadelphia, the current financial state of the Philadelphia School District, and the future of education in Philadelphia under local control.

Nearly two years ago, I stood in this room and I told the story of a young man I met at the Pennypack School.

The Pennypack school is inside the Philadelphia Industrial Correctional Center on State Road, and the young man, along with his classmates, were all charged with serious crimes.

Despite his situation, the young man told me that he was enjoying his time at Pennypack.

He said it was the best school he’d ever attended.

After telling his story, I asked the members of this body to take on a big challenge, so we could get more of our children on the road to Penn, instead of Pennypack.

City Council met that challenge and, as a result, we’ve made historic investments in Philadelphia’s children: Nearly 3,000 children have gained access to free, quality Pre-K; 6,500 students and their families have been served by a community school; and, we’re on the verge of kicking off the first round of Rebuild projects, which will provide much-needed improvements to the libraries, rec centers, and parks that serve our children and their families.

These achievements were no small feat, but ultimately, our children’s success and Philadelphia’s success depends on the quality of our schools. And, right now, we are leaving our city’s fate largely in someone else’s hands.

If we do not have quality schools in every neighborhood, the people who have helped to reverse the city’s decades of population loss will not stay; the children whose families cannot afford to leave will be unprepared to compete in the 21st century economy; Businesses will not come to Philadelphia, and those that are here won’t have the local talent pool to grow; and the City’s poverty and crime rates will remain stagnant or worsen.

So, today, after nearly two years of careful consideration and research, 98 school visits, and conversations with 158 school principals, and countless parents, teachers and business leaders, I am officially calling on the members of the School Reform Commission to vote to dissolve at their next scheduled meeting.

After they dissolve, we will return to the School Board as it is currently written in the charter: a nine member board appointed by the Mayor.

These nine board members are recommended to the Mayor by a nominating panel.

The nominating panel is composed of thirteen Philadelphians, including four members of the public at-large, as well as nine leaders of organizations, described in the charter, whose institutions support the public good across the City.

When the nominating panel is in place later this year, we will begin to take in recommendations and applications for individuals interested in serving on the Board of Education.

We will select the members of the school board with one goal in mind: ensuring every child has access to quality schools, no matter where they live, or what they look like.

And, I believe there are four primary factors that must be present for that goal to become a reality

The first is accountability.

Again and again, we’ve told the people of Philadelphia that the state of their schools are someone else’s responsibility.

When the SRC dissolves itself and we return to a school board appointed by the Mayor, you can hold me, and future mayors, accountable for the success or failure of our schools.

The buck will stop with us.

In a 2016 report, the Pew Charitable Trusts found that school districts’ governance must avoid uncertainty about accountability in order for its schools to succeed.

I also hope that clearer accountability can provide an opportunity to shift the unhealthy debate between public charter schools and traditional district schools.

The District currently serves over 200,000 students, including the nearly 70,000 of those students attending a public charter school.

I am responsible to every one of those children, no matter the type of school they attend.

And, I will be judged by the voters on the number of high-performing schools in every neighborhood, not whether those schools are district or public charters.

The second factor necessary for our schools to succeed is collaboration between our schools and our City leadership.

Philadelphia’s collaboration with the School District has increased dramatically in the last few years.

We’ve embarked on a project to create 25 community schools by 2020.

We’ve increased our financial contribution by $520 million annually over the last six years, with the help of City Council.

The District has been a key strategic partner of PHLpreK, serving not only as a provider, but also lending their expertise in the program’s design and implementation.

The Read by 4th campaign was critical to the increase we saw in reading test scores for our elementary school students this year.

In each of these areas, when the City and the School District had a shared goal, we were able to succeed.

Local control will multiply these benefits because we will now be working under one common vision — with the full support of the City’s departments and resources behind the District.

Specifically, we can improve the ways in which school facilities are made available for community use during non-school hours.

We can look at transportation planning for safer routes to schools.

And, we can also improve our students’ career readiness.

Working with the Managing Director’s Office and the Commerce Department, the District has committed to all high school students gaining a quality work experience, including a summer job, mentoring or shadowing with an employer.

All students will also receive a “post secondary” plan that helps them prepare for the career or college of their choice.

The other two fundamentals our schools need to succeed are adequate resources and strong leadership. 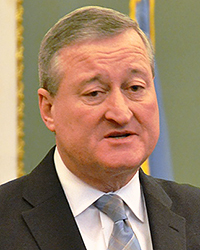 During the past 15 years of SRC control, we’ve had three superintendents, with current Superintendent, Dr. Hite, serving the longest term.

Dr. Hite has helped our students succeed, even while dealing with very difficult resource challenges.

Over the last several years, the District has had to make hundreds of millions in cuts.

Our schools were left without full-time nurses or counselors and many classrooms had persistent teacher vacancies.

Children lost months of valuable education time – setting them back in test scores and, more importantly, in life.

Some of them never made up that lost ground.

Children with chronic health issues had to turn to principals or other non-medical staff to administer life-saving medication.

Extracurricular activities were reduced and in some cases altogether eliminated.

Our teachers went five years without a contract or a raise, all the while working more and more to make up for these cuts.

It is only in the last couple years that Dr. Hite was able to address some of these issues, thanks to an increase in financial support from Philadelphians.

Thanks to these investments, the graduation rate is now up to 66 percent and schools classified as “persistently dangerous” have been eliminated.

The latest test scores showed that 35 percent of third graders are now reading on grade level, up from 30 percent the year prior.

There were also small improvements in algebra, biology, and literature test scores in high schools.

But we cannot expect Dr. Hite, our teachers or our students to take this incremental progress and expand it into greater success while enduring another cycle of cuts.

Due to factors outside its control, the District is facing a deficit which begins next year and will grow to nearly $1 billion over the next five years.

I am unwilling to sacrifice the hard-won progress of our students and go back to the days of classrooms without teachers and schools without counselors or nurses.

I am committed to providing the supports Dr. Hite needs to produce better educational outcomes for our kids.

So, in our next budget, I will propose a plan to meet the District’s needs.

These investments will go toward:

And all of those other supports we need to bring quality schools to every neighborhood.

Let me be clear. There will be no easy solutions for funding these resources.

The District, has nothing left to cut.

They have negotiated significant concessions from all their unions and reduced their administrative staff to just 3 percent of the budget.

And, the District’s projections already assume that it will close two district schools a year based on declining enrollment trends and aging facilities.

Unfortunately, the same is true of our City departments.

While our City Departments are already looking at targeted budget cuts, so much was already cut during the Recession, that the money to meet the District’s needs solely through cuts just isn’t there.

And, while local control may ultimately create administrative or operational efficiencies, these will take years to identify and effectively transition.

Delinquent taxes are also not the answer. The City and the School District’s five year plans already assume a total of $600 million in delinquent collections.

PILOTs, while worth exploring, only produce about $30 million annually for the City of Boston.

And, help from the Commonwealth is not coming.

Our delegation has worked diligently over the past several years to extend our local cigarette and sales tax, and adjust the formula so Philadelphia would not be negatively impacted by our move to full valuation, but the structural issues the state faces make additional help for Philadelphia highly unlikely.

No matter how anyone may feel about it, that’s the reality.

To say otherwise, would only push off the responsibility we all say we want with local control.

So, the final plan we will propose to meet the District’s needs will be difficult, and it will require everyone to pitch in – but the alternative is far worse.

If we do not provide our children the resources they need, the cycle of budget cuts and instability which have hindered our students success for decades will continue.

And, Philadelphia will slowly, but surely fail.

That’s a dark prediction but it’s an accurate one.

Our schools are the key to reducing our poverty rate.

If we don’t create quality schools, then the brief renaissance our city is experiencing will evaporate when families choose to move in search of a better education for their children.

If our schools don’t attract new businesses or produce quality talent, then no new jobs will come.

If we don’t take responsibility for the fate of our schools, then we will continue to relegate generations of Philadelphia’s families to poverty.

I am not willing to do that

We must choose to meet this moment and become the masters of our own destiny.

If we pair local control with increased investments, we can finally confront our City’s most persistent challenge.

If we decide not to pass the buck, but rather to double down on our commitments, we can ensure that no child’s fate is determined by their zip code.