Mayor Kenney and others show unity in rebuilding city playgrounds 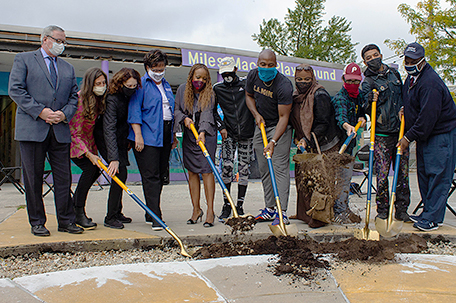 During the event, Mantua residents were informed about the  future makeover of its oldest playground as part of the city’s Rebuild initiative program. There were over 50 residents and officials in attendance.

“Well, it was chosen (Miles Mack Playground) because it desperately needs the love,” Ott-Lovell said. “I mean improvements are needed, but it has a lot of love. But it definitely needed the capital investments and it’s a neighborhood that had waited a really long time for an investment like this.”

“You can look at the center and see that it’s seen its better days,” Kenney said. “The equipment needs to be upgraded, the spray park needs to be done and the building needs to be improved. I think the kids in this neighborhood deserve to have a facility that we’re all proud of and that they can go to and be safe and just be good kids and good citizens.”

The playground’s supervisor, Khadijah Muhammad, was excited to get the call that her playground was chosen for the program. Councilmember Gauthier showed her excitement for the project.

“I think it’s truly amazing,” she said. “I think it’s an investment not just in this center and facility, but in this neighborhood, which has been crying out for investment for a long time. And I also think that this is a time when we need “safe spaces” in our neighborhoods for families to be able to recreate and to enjoy.

So, I’m just thrilled that this is happening for this community.”

The original budget was thought to be between $600 to $800 thousand in 2019, but Executive Director Kira Strong of the Rebuild Initiative brought Mantua exciting news of the improvements that it takes to make a great city playground that the community will love when it’s being rebuilt.

The value of its rebuild is now a $2.2 million dollar renovation project that will be completed within the next 9 to12 months .

“This rebuild means a lot,” Strong said. “The city has been invested in West Philadelphia and the Mantua particularly for a long time. I think there’s a recognition that there is such a strong community fabric here and real advocates who really, really care about their neighborhood.”

The Miles Mack Playground is Mantua’s only playground with a multi-purpose field. Also, the construction will be done by a minority woman-owned construction company. Fifty percent of the workers on the project are minorities.

Marques Brown, son of Miles Mack —  who the playground is named after — showed emotion and passion about re-energizing his father’s vision during a speech which brought great applause from those in attendance.

“It feels surreal  that I’m standing here right now talking about my dad’s legacy and the legacy of Mantuans from his generation and my generation, because he was an extension from the YGS era as well?” he said. “And I know how much this playground meant to him as a child and as an adult, because he had his league here (called the X-Tra Miles Basketball League) and that was no accident.”

“So, I’m very interested in seeing what we can do next to take on the Dr. Herman C. Wrice Legacy and the Miles Mack Legacy and to make it systemic and that kids have these things they should know about these people forever,” Brown concluded.

Rebuilding this community playground should resonate with young people, proving that city playgrounds can be their own “Field of Dreams” and with the passion of men and women from the community, they can be given an opportunity to be in a safe place without the threat of harm.