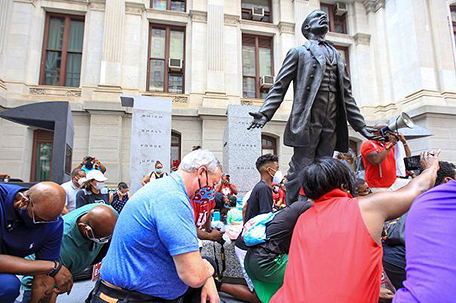 The $4.8. billion plan has a little pain for everyone.

On Thursday, Philadelphia City Council held an initial vote to pass a revised budget for the 2021 fiscal year.

Revising the budget became necessary due to what began as a $650 million hole blown into it due to coronavirus related spending. Earlier this week, representatives from the Mayor’s Budget Office were notified that due to a decrease in sales taxes, the hole had now increased to $749 million.

While the $4.9 billion plan has a lot of pain for everyone, some places were hurt more than others.

The additional $100 million in reduced revenue led to cuts to the City’s police and fire departments. The Fire Department took a $5.8 million hit. And the Police Department lost $33 million total — $14 million due to crossing guards and public safety officers being moved to the Managing Director’s office and $19 million due to a revolt from Council members following protests due to the death of George Floyd — from its proposed budget.

Because of this, the city was able to put money back into the Housing Trust Fund ($20 million), the Cultural Fund ($1 million) the African American Museum in Philadelphia ($350,000), and Adult Education programs ($1.4 million).

In a statement shared by the city’s Fraternal Order of Police on social media, FOP President John McNesby decried the cuts to the police budget, calling them “reckless and irresponsible under the guise of police reform.”

“This spending plan will devastate any efforts by the police department to engage and fund numerous community outreach programs,” the statement continued. “Our political leadership is tone deaf and blind to the realities of public safety in our city by implementing these drastic budget cuts.”

Council also applied $25 million to what it calls the “New Normal Budget.” This money will be directed toward healthcare, healthy food options, affordable housing, anti-poverty programs, job training and other things designed to bridge the gaps between the haves and have-nots exposed by the coronavirus and the George Floyd protests.

“Our budget is a moral document,” said Councilmember Maria Quiñones Sánchez, chair of the appropriations committee. “We have a responsibility to secure Philadelphians’ right to raise our children in safe, affordable, accessible housing across diverse, mixed-income neighborhoods where everyone can share access to quality jobs, quality schools, and quality transit.  We can achieve this goal through this budget by investing directly in rental assistance and eviction prevention for low-income households at a moment of unprecedented need and disparity.”

Also included in the plan is a parking tax increase that would expire next year and hopes to generate $10 million and an increase in the non-resident wage and net profit tax. While the rate for the wage and profit taxes have gone up to 3.5019%, these taxes are still below the rate paid by city residents of 3.871%.

It was a budget no one liked, including Mayor Jim Kenney. The original budget that the mayor had unveiled back in March was an ambitious document that included anti-poverty programs, extensive education spending and improvements such as expanded street sweeping.

This budget, one forced on Philadelphia by a global pandemic, is a shadow of its former self. But it allows the City to do what’s most important, Kenney said.

“It pains me that this budget reduces some City services and eliminates hundreds of jobs,” he said. “Still, we have prioritized core services, protected our most vulnerable residents, and maintained our financial flexibility to enable a quick rebound. Thanks to Council’s leadership, I believe this budget will accomplish the goal I laid out on May 1; we will keep all Philadelphians safe, healthy, and educated while maintaining core municipal services that our residents rely on daily.”

When the revised budget was first announced, and it was discovered that Office for the Arts and the Creative Economy would be folded into the managing director’s office and that arts and cultural organizations like the AAMP would be totally cut off, arts and culture groups appealed to Council members.

One of the members that listened was Councilmember David Oh, who hosts the annual talent showcase Philly Live each year. During Wednesday night’s Committee of the Whole meeting, Oh introduced an amendment to the budget that would allow the city to use funding set aside for other uses, such as the City’s sweetened beverage tax, money from the city’s fund balance, and savings from other cuts to restore the Office of the Arts and the Creative Economy.

While the amendment itself was defeated, the monies restored to the Cultural Fund and AAMP showed that Oh and his concerns were considered, Councilmember Quinones Sanchez said.

“We have to vote for these things based on real numbers,” he said.

The budget bills will be voted on for final passage during next Thursday’s council session. Once they are approved, the budget will be sent to the Pennsylvania Intergovernmental Cooperation Authority for approval before it becomes officials.

The city must have a budget in place by June 30 due to the fiscal year beginning on July 1.

In other Council news, Council passed a package of bills that would help tenants impacted by the coronavirus pandemic. These bills include an extension of the current eviction moratorium to August 31, an eviction diversion program that would help mediate disputes between landlords and tenants, a back rent repayment plan for renters with hardships, a waiver of late fees during the pandemic and remedies for renters who have been illegally locked out.

Councilmember Kendra Brooks praised her colleagues for passing the legislation, one of the first pieces she’s been a part of since formally joining the body in January. As someone who has experienced the kind of housing insecurity that many are dealing with now due to the coronavirus, she was glad to see that her colleagues get it.

“Council really stepped up to the plate,” she said. “When families have homes to stay in, our communities are safer and healthier.”

Philadelphia City Council’s next meeting is scheduled for next Thursday, June 25, at 10am.