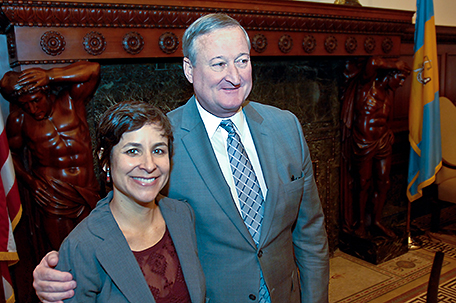 “I want Philadelphia to become a national model in responding to domestic violence,” Mayor Kenney said.  “Too many victims suffer in silence because they are embarrassed for fear of even greater mistreatment. Domestic violence is at the core of many of the health and social issues our city struggles with including homelessness, addiction and educational barriers. We must work together to create better outcomes for our neighbors.”

Azucena Ugarte, who currently works at Women Against Abuse, will be taking on this new role. As Director of Domestic Abuse Strategies, she will build the capacity of the City’s health and human service agencies to address domestic violence, coordinating with groups working to combat domestic violence and assist victims, including the advocacy community, non-governmental service providers, law enforcement, city agencies and religious institutions. She will be working out of the Department of Human Services (DHS). 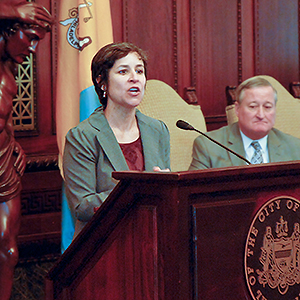 Ugarte speaks at the press conference about her new role. (Photo by Bill Z. Foster)

“The City is pleased to add new resources to the coordinated community response to domestic violence. Azucena will be supporting all of the Health and Human Service agencies and making connections for us across government, particularly with public safety organizations. Initially, she will assist DHS to assess and address domestic violence as it supports families who experience many stresses and traumas,” said Eva Gladstein, Deputy Managing Director of Health and Human Services.

Last year, the Philadelphia Domestic Violence hotline had to turn away over 14,000 requests for safe shelter due to a lack of capacity in Philadelphia’s two safe havens for victims of domestic violence.

Jeannine L. Lisitski, Executive Director and President of Women Against Abuse is thrilled about the new position. “For too long, domestic violence – a fundamental component of public health and safety – has been inadequately addressed without the coordination of a city authority,” said Lisitski. “Today’s groundbreaking announcement dramatically changes the landscape, and will position Philadelphia to successfully intervene into an issue that threatens families across our community. We are honored that the city has chosen a longtime member of the Women Against Abuse team for this new role, and look forward to continuing to work together to enhance the safety of Philadelphians like never before.”