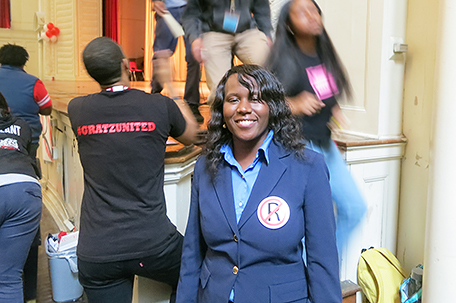 ABOVE PHOTO:  Sekela Coles, School District Councilperson from Upper Darby was one of the officials attending the rally and who took the pledge. (Photo: Courtesy Ceisler Media)

1,200 Gratz students from grades 6-12 attended a rally celebrating inclusivity of their peers with disabilities and special needs, featuring special guests and student performers

Mastery Charter Schools’ Gratz Campus partnered with the Special Olympics on May 6 and hosted a rally celebrating the inclusivity of students with disabilities and special needs. Over 1,200 students from grades 6-12 gathered in the auditorium and enjoyed a mix of general education and intellectually disabled students give energetic and rousing performances. The rally included cheerleaders, a dance group, poetry and drumline. Between performances, special invited guests took the stage and pledged to “spread the word to end the R word.” 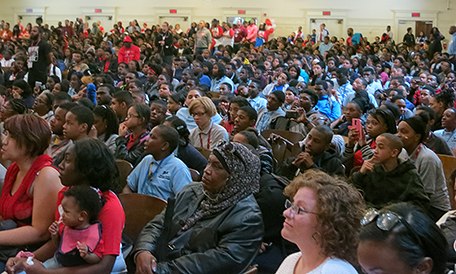 The R-word is the word ‘retard(ed)’. It’s a hurtful term to those with disabilities because it is exclusive, offensive and derogatory. The campaign asks people to pledge to stop saying the R-word as a starting point toward creating more accepting attitudes and communities for all people.

About Mastery: Mastery Charter Schools and Mastery Schools of Camden form a non-profit school network in Philadelphia and Camden, New Jersey, serving over 12,000 students in grades K-12. Our vision is to create schools that are joyful, authentic communities where students learn how to think critically and act independently so they are truly prepared for post-secondary success.