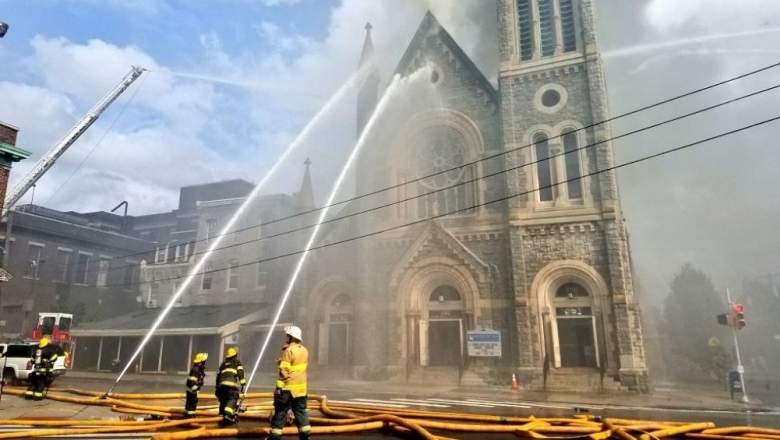 PHILADELPHIA (CBS) — A massive fire at a West Philadelphia church is finally under control after several hours as the blaze caused parts of the building to collapse onto the street. The three-alarm blaze erupted on Tuesday afternoon at the Greater Bible Way Temple on the 1400 block of North 52nd Street, and Fire Commissioner Adam Thiel says fire crews will be at the scene the entire night.

“The entire church has been involved in fire,” Thiel said.

Burlington County Man Fatally Shoots Missing Man In Back Of Neck, Buries Him In Grave In Pine Barrens, Prosecutor Says

The church fire has been placed under control. PFD members will remain on scene all night to douse hot spots. https://t.co/1h4HQtLLMT

Firefighters were called to the scene around 2:50 p.m. and the fire was placed under control shortly after 6 p.m.

Video from Chopper 3 showed smoke and flames shooting from the church’s roof and steeple. Smoke is masking the entire area. Fire officials are asking people to avoid the area.

Thiel said there were reports that everyone was out of the church at the time of the fire, but one person was transported to the hospital. The person’s condition is not yet known.