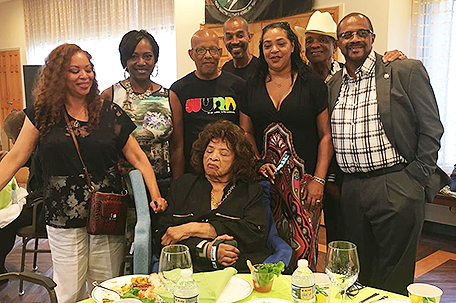 ABOVE PHOTO:  Mary Mason Radio Diva (sitting) surrounded by people who still care about her. From the left; Deborah Satterwhite, Thera Martin-Milling of WURD, Joey Temple of WURD, Lady B of Radio One, Businessman Bill Richardson is in the cowboy hat, and Sheriff Jewell Williams.  (Photo courtesy: Thera Milling)

Often very helpful and compassionate, and sometimes down right tough as nails.

When she wanted to, she could be kind and helpful and ever so sweet. If she didn’t like you, however — for whatever reason — she knew how to rake you over the coals, live and on the air.

These are a few examples of how Philadelphians have experienced veteran broadcaster Mary Mason during the many decades she spent as Philadelphia’s “Queen of Radio”.

Last Sunday, a group of her friends gathered at the senior citizen home where Mason now lives to celebrate her birthday.

Deborah Satterwhite — Mason’s longtime friend and chief caregiver — put together the lovely Sunday afternoon celebration to honor the radio icon, who is battling Alzheimer’s Disease. Mason used to always say on the radio that “A woman who will tell her age will tell anything,” so, in honor of how Mary feels about telling her age, we won’t.

The amazing thing is that although she has been off the air for a decade, people remember her like she just signed off 30 minutes ago. The legacy of Mary Mason will live on for decades to come.

On hand to help celebrate were Philadelphia Sheriff Jewell Williams, City Councilwoman Jannie L. Blackwell, Community Activists Mike Reed and Steve Pina and radio personalities Lady B of Radio One, Joey Temple of 900AM and 96.1FM, WURD, and of course, yours truly, myself, and W. Cody Anderson, one of Mary Mason’s former General Managers at 1340/AM WHAT where she reigned for many years.

Bill and Barbara Richardson of the Rose Flower Shop were also on hand, as was author and businessman Eric Ward, journalist Sheila Simmons, and a host of other friends and well-wishers. Several people spoke about Mary and why they appreciated and loved her even though she is one of the original “tough cookies”.

Sheriff Jewell Williams reflected on all the many times Mason would call out his name, or that of Fareed Ahmad, or Sultan Ahmad, or Kentu, to handle a crisis for a poor family or for a senior citizen in need. 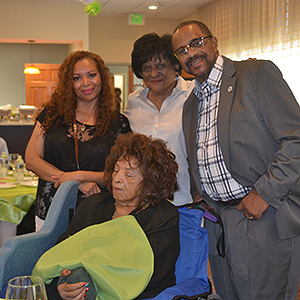 “If Mary said ‘Jewell or Fareed, I need you to go take care of this senior, whose home burned down last night,’ we were on it. No one argued with Mary.”  Williams recalled.  “For as tough and blunt as Mary could be, I know her as a woman and activist who would give and give and then give some more to help someone in a time of trouble.”

Many Philadelphians in particular, remember listening to Mary Mason on the radio, dating back to the 1960s. My mother would have Mary on as she cleaned and did other things at home, and there was many a mother like mine, listening and hanging on to Mary’s every word on the radio during “Mornings with Mary.”

There are countless reasons why many Black women in radio broadcasting admire pioneers like Mary Mason and the Rev. Louise Williams Bishop. One of those reasons is that unlike many of the men who were in radio, Louise and Mary were empowered, modern women who saved their money, invested it wisely and were living in homes they owned outright.

Rev. Williams Bishop is doing well, and still hosts a Sunday morning gospel music show on WURD. However, due to circumstances beyond her control, Mason experienced a complete reversal of fortune, largely due to the financial mismanagement of her affairs by her grandson, Calvin Steven Turner, IV, her only heir. His father, C. Steven Turner, III — Mary’s only child — died suddenly in 2012.

Turner, IV (who Mason so lovingly referred to as her “G.B.” on air) misused her money, running through it until almost all of it was gone. It’s a tangled mess. He was arrested on charges of identity theft, fraud and forgery in March and faces trial in Montgomery County Court in Norristown.

But to be very clear, this article isn’t about the misdeeds of a grandson. It is about those of us who care about Mary Mason. We need to help raise some money for her now to cover daily necessities.

Satterwhite has been appointed the Administrator of Mason’s Estate, whatever has been left of it after Mason’s grandson was deemed as unfit to handle his grandmother’s money by the court.

Satterwhite says that she has used a lot of her own money to assist Mary, but is not independently wealthy, and needs help. A fund-raising campaign has become the only option to ensure Mary Mason has what she needs.

The fund is called the Mary Mason Care Project. Donations can be mailed to the attention of Deborah Satterwhite at 744 South Street, Suite 767, Phila. PA 19147. The phone number to call for more details on how you can help is 484-262-9388.

Concerned fans and supporters can also make a contribution towards Mason’s final expense fund. Final expenses can be extremely costly, and currently, there are not funds available for Satterwhite to ensure that even basic services can be provided.

Come on, Philadelphia! For all that Mary Mason did for so many, now’s the time we give something back to her. She doesn’t deserve to be languishing away in some Philadelphia nursing home with no family, no visitors, and less than a handful of “friends”. Politicians, people in corporate America, non-profit leaders, community activists, come on – let’s help Mary.

Thera Martin Milling, is an on-air radio talk show host at 96.1FM and 900AM WURD in Philadelphia and a regular columnist with the SCOOP USA Community Newspaper. Milling also worked with Mary Mason at 1340AM/WHAT.