Marriage For All… Finally 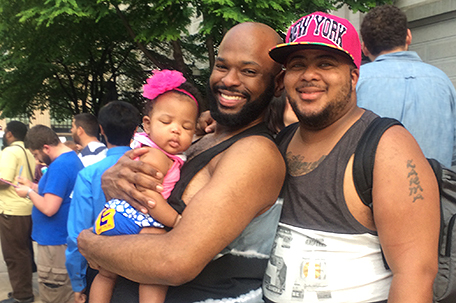 ABOVE PHOTO:  Kayden Dennison (right), his husband Elijah Coleman and the couple’s 4-month-old daughter Azaelia were among the same-sex families that gathered at City Hall on Tuesday for a rally celebrating U.S. District Court Judge John E. Jones’s ruling that strikes down the Commonwealth’s Defense of Marriage Act. Gov. Tom Corbett announced on Wednesday that he wouldn’t appeal the ruling.  (Photo courtesy: Denise Clay)

Thanks to a federal court ruling, Pennsylvania became the latest state to strike down a ban against same-sex marriage.

Last year, like a whole lot of other couples in the Commonwealth of Pennsylvania, Elijah Coleman and Kayden Dennison of East Oak Lane got married.

But because Pennsylvania remained the lone Northeastern state that had a ban on same-sex marriages, they had to go to New York to tie the knot. And because the Commonwealth didn’t recognize said marriages performed in other places, certain simple things that married couple usually do have been made really difficult, Dennison said.

“They don’t recognize our marriage certificate at [Penndot],” Dennison said, “So in order for me to change my name I have to change my passport, then my voter registration, and then my Social Security card to make that change. It’s a real hassle.”

On Election Day, the U.S. District Court took away some of that hassle by striking down Pennsylvania’s Defense of Marriage law, thus paving the way for same-sex couples to take that walk down the aisle and for couples who have married in places like New York, New Jersey and Delaware to have their marriages recognized.

Gov. Tom Corbett issued a statement on Wednesday saying that his office wouldn’t appeal the ruling, thus allowing people to start getting married as soon as Friday.

In a 39-page ruling that incorporated the landmark Supreme Court decision Brown v. Board of Education, U.S. District Court Judge John E. Jones said that the time for laws like Pennsylvania DOMA has passed.

“We are a better people than what these laws represent, and it is time to discard them onto the ash heap of history,” Jones said in his opinion. “The issue we resolve today is a divisive one. Some of our citizens are made deeply uncomfortable by the notion of same-sex marriage. However, that same-sex marriage causes discomfort in some does not make its prohibition constitutional. Nor can past tradition trump the bedrock constitutional guarantees of due process and equal protection.”

As a rainbow flag waved in the background, about 300 people gathered at City Hall for a rally after the ruling was announced. Holding signs saying “Love is Love” and “Love Wins!”, a jubilant mood prevailed as couples who said “I do”, want to say “I do” and people supportive of “I do” for all got together to celebrate the ruling.

The lawsuit that led to the decision, Whitewood v Wolf, was filed by Hangley Aronchick Segal Pudlin & Schiller, the American Civil Liberties Union of Pennsylvania, the American Civil Liberties Union, and University of Pennsylvania School of Law Professor Seth Kreimer on behalf of a group of people that included the widow of a same-sex couple, 11 couples wishing to marry, and the children of same-sex couples.

Many of the lawyers involved in the case came to speak at the rally. They were pleased with the victory and the freedom it grants to people like their plaintiffs.

“The court, in a bell-ringing opinion, has explained in crystal clear language why the promises of our Constitution extend to all Pennsylvanians,” said Mark Aronchick, a former City Solicitor who served as lead council for the plaintiffs. “This feels like the most important thing I’ve done in my 40 years of being a lawyer. I felt like we were carrying the hopes and dreams of so many people and their children.”

“I’m not surprised by the ruling, but I’m elated,” said John Stapleton, a lawyer with Hangley Aronchick who also served as co-council. “We had the law and the facts on our side.”

Before the rally started, the state’s first same-sex marriage license was issued to Rue Landau and her partner Kerry Smith. The news that Landau, executive director of the Philadelphia Commission on Human Relations, Smith and their 6-year-old son could officially become family without leaving town was welcome.

“[The news] was fantastic,” Landau said. “We had talked about going out of state to be married, but we wanted to be married here.”

But not everyone was happy with the decision.

“[Tuesday’s] federal district court decision striking down Pennsylvania’s Defense Philadelphia Archbishop Charles Chaput said. “Like many other Pennsylvanians, I hope that an appeal will be made promptly.”

“Today’s decision by one federal judge speaks to the confusion and misunderstanding among many today about the fundamental building block of society: the family,” the Pennsylvania Catholic Conference said in a statement issued Tuesday, “Every child has a basic right to a mother and a father united in marriage as a family. Today’s decision does not change that.”

But on Wednesday, Gov. Tom Corbett dashed those hopes.

“I have thoroughly reviewed Judge Jones’ opinion in the Whitewood case,” Corbett said in a statement. “Given the high legal threshold set forth by Judge Jones in this case, the case is unlikely to succeed on appeal. Therefore, after review of the opinion and on the advice of my Commonwealth legal team, I have decided not to appeal Judge Jones’ decision.”

And with that decision, how Kayden Dennison planned on spending his Wednesday morning made even more sense. He could now make the name change he’d been trying to make since he and Elijah Coleman made the decision to put a ring on it last year.

“Now that our marriage is recognized, I can go and take care of this,” he said excitedly. “I’m going first thing in the morning.”