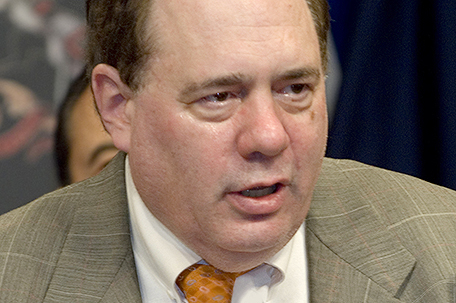 Mark Cohen believes that fighting for social justice is part of his family’s legacy.

That is one of the reasons why the former state representative is running for the position of Common Court Pleas Judge.

From an early age, Cohen said he learned the value of doing what is fair, which is something that he still believes in. His earliest childhood memories were seeing his father– the late City Councilman David Cohen– work with legal clients as he got ready for school. Often his father would start seeing clients as early as 6:30 a.m., and his mother– the late Florence Cohen– would stay up until 3 or 4 a.m. either doing legal research for her husband or doing her own work as an advocate for autistic children.

“Both of my parents spent much of their life [as advocates],” Cohen said. “They took the lives of their clients very seriously, and both worked hard for the people. They not only didn’t work average hours, but they often worked on tough assignments — working hard.”

Cohen became interested in politics early. When he was 15, the Central High School student attended the 1964 Democratic National Convention in Atlantic City. He also served as an officer for the University of Pennsylvania’s College Democrats of America chapter.

His public service was largely informed by his father, who  who passed in 2005. From advocating for Branches of the Free Library of Philadelphia in African American neighborhoods, (the Ogontz branch of Free Library has been renamed for David Cohen) to his work in City Council, Mark Cohen views his father as a role model and an inspiration for justice.

“My father wanted a better Philadelphia,” Mark Cohen said. “Growing up, I heard how you have to fight. I heard that you have to give people a lot of hope and help. My father always held on to hope, because he believed that change was possible.”

If he’s elected to the judicial bench, Cohen intends to continue his father’s legacy by ensuring that justice is served. He believes that his years in the Pennsylvania Legislature will enhance his ability to influence policy in ways that most judges cannot. He said that his many years working on policy has given him both the ability to see the larger picture as well as the more detailed nuances.

Ultimately, he sees himself as a Common Pleas judge in a unique position to bridge the gap by intervening where prior judges could or would not go. He said that as a rule that although Supreme Court procedures are generally open to the public, rarely do judges of lower court intervene.

“We need a more active legal process that is more focused on having an outcome that is efficient and fair,” Cohen said.

If elected, he would not be the first judge from his family of origin. His brother, Denis Cohen, serves the First Judicial District of the Court of Common Pleas.

Cohen plans to carve out his own destiny as a judge, and continue making a positive impact to bring about the “better Philadelphia” his father envisioned.

“I just believe that I have the expertise to make better decisions that will have better results for the people of this city,” he said.