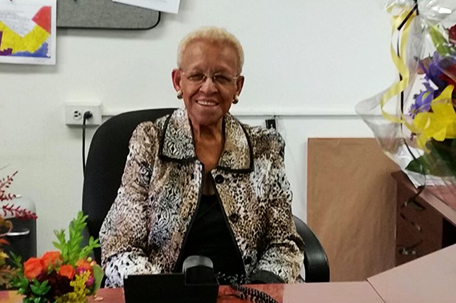 Give her of the fruit of her hands and let her own works praise her in the gates (Proverbs 31:31)

God uses ordinary people to do the extraordinary.

Marion “Peggy” C. Johnson, who was an exemplar of how God can use the ordinary, extraordinarily, truly embodied what it means to live a life of service.

Peggy’s extraordinary life began in Philadelphia, Pennsylvania on July 7, 1933, when she was born to parents James and Helen White, both of whom predeceased her.  She was the youngest of five children, who also preceded her in death.

Peggy, as she was affectionately called, is now at rest with her Lord and Savior Jesus Christ. She departed this life on Thanksgiving Day, Thursday, November 24, 2022, at home, surrounded by the family she cherished.

Peggy was extremely driven and focused to achieve her goals while staying sincere, kind, and compassionate. She could identify the needs of others and strived to meet those needs in all that she undertook and helped others without expecting anything in return.

Her work journey began with R & M (Rudolph and Marion) Distributors, where they managed over 300 publications.  She was employed by Senior Wheels East for 14 years, before starting her own Senior Citizens program at Morris Chapel Baptist Church.

Peggy retired after working 28 years as the Zoning Specialist and Legislative Aide for Councilwoman Marian B. Tasco. She was recognized and acknowledged for being a trusted advisor who provided fair, informed, and diligent input on zoning applications, and for her lifelong public service in the Ninth Councilmanic District and to the City of Philadelphia.

Peggy, with her children by her side, was a staunch community activist.  Peggy even made sure that her daughter Brenda, in spite of physical challenges, was able to serve the community alongside her.  She fought to champion the quality of life for all, especially senior citizens, and children.

Peggy was passionate about equity in education and housing, having clean, safe neighborhoods, with adequate play spaces for children and youth.

She volunteered as a community activist, serving with the Concerned Citizens of Olney-Logan, Vice President of Logan Civic Association, Executive Committee Person for the 49th Democratic Ward for over 40 years, block captain for the 5000 block of 8th Street, and member of Barrett Playground’s Advisory Council.

Marion Johnson’s name (Marion Johnson Way) was added to the street signs on the block intersections of 8th and Duncannon Streets to 9th and Duncannon streets, in recognition of her public service in the Ninth Councilmanic District and to the City of Philadelphia, and for her dedication to ensuring the support and success of the rebuilding of the Barrett Recreation Center.Peggy was raised in North Philadelphia with her parents and siblings.  Being the baby of the family, needless to say she was spoiled!  Her brothers and sisters often advocated for her in an attempt to save her from their parents’ discipline, thus paving the way for her community activism. Marion was taught to live a life of faith, loving God, her family, and neighbors. She learned the importance of prayer, connectedness, support, and having love for one another. These principles proved to be the bedrock for her conscientiousness and steadiness.

Educated in the Philadelphia public school system, Marion graduated from William Penn High School.  Even as a teenager, she had an innate ability to trust and follow her heart.  After graduating high school, Peggy was united in holy matrimony to Rudolph Johnson, the next-door neighbor (they were each other’s first and only boyfriend and girlfriend). From this union five beautiful girls, Marion Antionette (Toni), Deborah Helene, Patricia Ann, Brenda Denise, and Linda were born. Peggy was a dedicated, faithful, loving wife and mother.

She found a way to make all of her girls feel like they were the only child. Peggy kept an impeccable home, from the rooftop to the basement. Her children recall hearing, “Don’t put your hands on my walls!” They remember her painting them in the wee hours of the morning whenever she detected a spot. Rudolph and Peggy were married for over 50 years, until his death.

Seeing her children grow up and have children was one of Peggy’s greatest joys and she, “MeMom”, counted it a privilege. She made sure they lacked nothing and had whatever was needed, daycare provider, playmate, protector, teacher. MeMom made each of them feel special while modeling patience, generosity, unconditional love, empathy, and was a listening ear.

Peggy’s Christian journey allowed her to exercise her gifts in several ministries. As a young child, she made a profession of her faith and worshiped with her family at St. Matthews, also where her husband served as a deacon. God led her to sow seeds at the Salvation Army, Morris Chapel Baptist Church, True Faith Missionary Baptist Church, and she joined Greater Exodus Baptist Church in 1993.  While on her Christian journey, Peggy faithfully taught Sunday School, Vacation Bible School, and participated in the Mother’s Club and Women’s Ministry.  She led Senior Saints ministries, which included arts & crafts, fashion shows, floral arrangements, and scrumptious meals.

May the fruit of her hands, her legacy of love for God, her family, and neighbors, be lived out today in each of us, and passed down from generation to generation.