Margaret Wells, the ‘Mother of The Drug Recovery Movement’ Philadelphia, has died 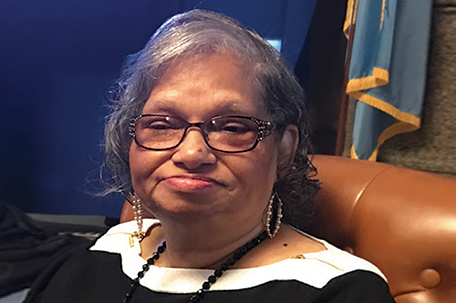 Margaret Wells, known as “Mom” Wells by all who knew her, passed away on Monday, November 30, 2020 after a battle with COVID-19 at Temple University Hospital. Margaret was the wife of the late Rev. Henry T. Wells, and together they founded One Day At A Time, (ODAAT), a drug and alcohol recovery program, which later also took on the responsibility of assisting people who are living with HIV/AIDS.

Born on April 20, 1947 in Jackson, North Carolina, she once told me after moving to Philadelphia in 1966, she came to love Philadelphia as if she were born here.

After meeting and marrying Henry Thomas Wells in 1979, little did she know  that together they would build ODAAT, an organization that would help thousands of men and women who were addicted to drugs or alcohol  and wanted to get clean, to reclaim their lives. People who know the history of the drug recovery movement in Philadelphia know that Mom Wells is considered the “Mother”of the Drug Recovery Movement in Philadelphia.

Mom Wells told  me that there were those among her friends who thought she had lost her mind almost 40 years ago when she agreed with her husband to allow a drug addicted couple to move into their home on the 1600 block of York Street in North Philadelphia.  The couple said they wanted to become drug-free.

From then until now, ODAAT has grown from two people searching for a new way of life to untold thousands who wanted to get their lives back on track and become responsible citizens, taking care of themselves and their families, holding down jobs, having their own homes and being able to feed themselves.

By profession, Mom Wells was a licensed practical nurse and more often than not, she worked private duty in that career for over 40 years. At the same time, she juggled being a wife and mother to five children, Mel Wells being her youngest.

With all of that on her plate, she also still found time to be a true helpmate to her husband with their organization, One Day At A Time, quiet as it was kept. Often Mom Wells was Rev. Wells’ number one advisor on issues of great importance to their growing recovery organization.

No matter where she was, no matter what she was going through, Mom Wells always kept God first in her life, and she installed that faithfulness in all her children. She was a proud member of Greater Philadelphia Church of Christ, where she was very active.

Equally, she was passionate about the 1600 block of York Street in North Philadelphia where she was the block captain for at least 35 years.  She loved every minute of it.

She initiated block clean-ups, not just when the city would roll out its annual “Spring Clean Up” event every April. Mom Wells organized block clean-ups every weekend —even when she wasn’t feeling well — and she made sure people were out, sweeping in front of their doors, painting their curbs and making certain that trash was stored properly.

She nurtured many a recovering drug addict or person with HIV right in her own home, even when her adult children protested. Mom Wells loved the Lord, and she had no fear of people who some may have considered “the least of these.”

For the last 25 years, every Labor Day weekend Mom Wells organized a block party that was also a health fair and a back to school, book bag and school supply give-away that attracted anywhere from 1,000-1,500 people each year.

She was always making a positive difference in the lives of people who needed assistance, so her impact was greater than just the 1600 block of York Street. She taught motivational classes for women in recovery at the ODAAT headquarters for years, up until her health wouldn’t allow her to do it anymore.

There will not be a public funeral service for Margaret, who told her children she didn’t want that.  At the appropriate time, there will be a number of events to celebrate her memory in the future.

The family ask that you please consider making a donation to One Day At A Time at: www.odaat-philly.org, to celebrate her memory, so that they can continue to do the work they do and honor her legacy forever.

One Day At A Time, Inc announces partnership with Community College of Philadelphia