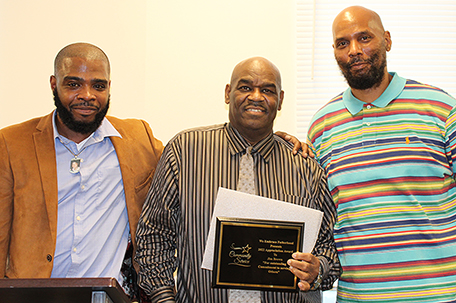 ABOVE PHOTO: From left; President of the Mantua Civic Association DeWayne Drummond, Jim Brown and Derek “Bub” Pratt, founder of WeEmbraceFatherHood. Brown was one of the award recipients. (Photos courtesy of Jim Brown)

On March 19, the We Embrace Fatherhood organization hosted its appreciation banquet honoring some of the community’s advocates at the new Mantua Civic Association Community Services Center in West Philadelphia.

The advocates were celebrated for their work in Mantua and throughout the city during the COVID-19 pandemic.

We Embrace Fatherhood works side-by-side with the Mantua Civic Association to address the issues and concerns of the community, with a specific focus on encouraging men to step up as contributing fathers, mentors, and advocates.

“I really believe that it’s important to show the people in the community how much you appreciate them,” Derek “Bub” Pratt, president of the Mantua Civic Association and founder of We Embrace Fatherhood said. “You know, in doing this work, it’s hard to get a lot of people out. A lot of people tend to only be concerned [about] what’s going on inside their homes. But, when you look at a community [as a whole], it’s not just what’s inside your home, it’s about your neighbors on both sides of you and across the street. So, to bring back that village, I just wanted to show people we appreciate them and then connect them with other people who are like-minded and doing the same work. So, as we come together, our family grows as the village grows.”

Pratt discussed his organization’s purpose and vision after celebrating and honoring the men and women who worked in their advocacy roles in Mantua and throughout the City of Philadelphia. The individuals who were honored are: Tiyonna Amey, Jim Brown, Dawn Wilkerson, Terri Palmer, Rikeyah Lindsay, Samuel Moore, Rachel Honore, De’Anna Drummond, Joe Walker and Jamal Johnson, who staged a protest at City Hall, Mayor Jim Kenney’s house, Kenney’s fiancee’s home  and  Gov. Tom  Wolf’s office to bring awareness to the city’s gun violence epidemic.

Some of the award recipients also shared personal stories about their family’s experiences with abusive fathers, dysfunctionality, and the impact that they have had in their communities.

“I work with the men in We EmbraceFatherhood because they are genuine in their ambitions and their hearts,” Lindsay said. “They do what they do from their heart, and it’s real. They are living role models for our community and the young men in this community, and I believe in their mission.”

“It’s just an amazing feeling, because having worked beside these gentlemen for over 52 weeks during the pandemic and to see how they were just amazing — meeting the needs of the hundreds of people and how they really serve the community — it felt amazing being recognized by them,” Honore said.

Johnson, the community advocate that led the hunger strike outside of City Hall for 26 days, spoke about what the honor meant to him.

“I was really flattered by the award itself,” he said. “I first met We Embrace Fatherhood when they were serving the homeless. We’ve been in communication and [supportive] of them ever since. This award kind [of] motivates me and keeps me going because sometimes I do things alone [due to] the type of stuff I do, and to be noticed and recognized in a way that’s benefiting the community [has] just allowed me to continue and stay motivated to do more of it in the hopes of curtailing some of the gun violence.”