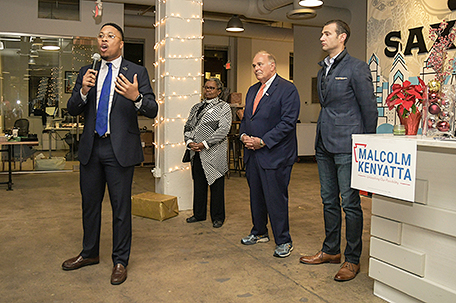 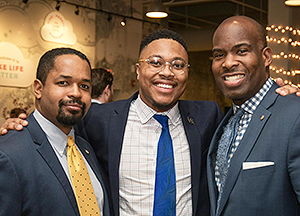 “I spent eight years in Harrisburg, and I saw what a difference a legislator can make,” Rendell said. “Malcolm is perfect for the job. … His energy and passion are going to make a real difference for people in his district.”

A third-generation North Philadelphian and Temple University graduate, Kenyatta is the grandson of Muhammad Kenyatta, a civil rights activist who ran for mayor in 1975. He was overwhelmingly elected as a delegate for Hillary Clinton to the 2016 Democratic National Convention, and most recently led the Chamber of Commerce’s diversity and inclusion initiative.

“Businesses like ours have to be at the core of the solution,” Nick Bayer, CEO for Saxby’s, said at the reception, speaking on the issue of income disparity. “The only way for that to happen is to have our elected officials like Malcolm represent their people so well that they can reach into the business community and get business people like us involved to provide those jobs, those careers, those changes in the lives of the people that he’s going to represent.”

Kenyatta told the reception crowd, “This campaign is simply about what our neighborhood can and should be. It’s about changing the trajectory of communities like ours that have been held back and held down, but not once have they ever given up.”