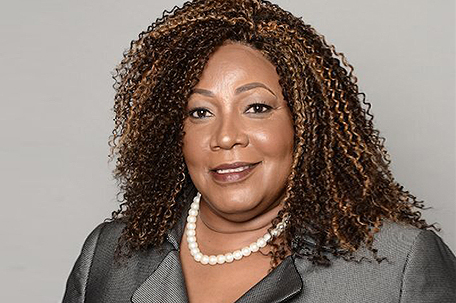 As her first year as the Philadelphia County Sheriff comes to a close, Rochelle Bilal is fixing the Sheriff’s office while simultaneously working in it.

Editor’s note:  For Women’s History Month, the SUN will highlight women, like Philadelphia Sheriff Rochelle Bilal, who made contributions to their communities and/or the nation as a whole.

No one could blame Sheriff Rochelle Bilal if she questioned her decision to run for Philadelphia County’s top law enforcement office.

During her first year as sheriff, Bilal, the first woman elected to the Sheriff’s office and the first Black woman to serve in the post, has had to deal with budget cuts brought on by a global pandemic, an armory that was disorganized at best, and whistleblower lawsuits filed by three staff members — former undersheriff and chief legal officer Sommer Miller, former human resources manager Anitra Paris and former chief financial officer Brett Mandel — that have led to a renewal of calls to abolish the office.

But while all of that is going on around her, Bilal keeps her focus on the work she was elected to do.

“As an activist in this city, I know that I’ve spent my entire life standing up for people,” she said.

The SUN sat down via Zoom with Bilal and talked with her about her first year as Sheriff, what challenges she has faced in office, how she’s bringing the office into the 21st century and her desire to be one in a long line of female sheriffs.

SUN: Thank you for the time, Sheriff Bilal. I guess that my question for you is, tell me about yur first day in office. What did you find? Did you say to yourself, ‘Tell me again why I ran for this office?”

RB: The first thing that I got hit with was the budget. But now I’m looking at things that we need to make the office operate more efficiently. I’m cleaning up things that were a total mess, and not just the budget. The transition team did a thorough assessment of the Sheriff’s Office in order to clean things up.

We had to clean up the armory and get it in order. I was a police officer for 27 years, and I’ve never seen any place where you’d keep weapons in that kind of condition. I started reorganizing and cleaning up; putting the records in order, tagging things and putting in the security system that was needed for the armory. How do you have guns and not secure them?! It was amazing that anyone could let it get to that condition.

SUN: Were there guns missing? I saw a report that said that 200 guns were unaccounted for.

RB: I wouldn’t say that they were missing. They were just unaccounted for due to poor paperwork and record keeping. This is a secure building, so you couldn’t just take a gun out of here and you wouldn’t know where the armory was if someone didn’t take you there. We’ve found records on more than 100 of those guns and they’ve been accounted for now.

SUN: But this, among other things, has led to another call for the Sheriff’s Office to be abolished.

RB: People have been talking about abolishing this office since I was young. People are going to have their own opinions on that. I could say that there are certain other things in the city that should be abolished, but one of them isn’t the Sheriff’s office.

I came here to develop policies and procedures, financial information and reports that are generated on a monthly basis so that everyone knows what’s going on in the Sheriff’s office. There’s accountability now.

SUN: When you ran for office, one of the things that you campaigned on was providing the kind of programming that could help people stay in their homes. Have you been able to do any of that due to the pandemic?

RB: There haven’t been a lot of sheriff’s sales due to the pandemic, but the programs have been put in place to help people stay in their homes. What we’ve been doing is compiling all of the information — city, state and federal — on how people can save their homes. While we’re out doing community outreach and food giveaways, we’re giving people pamphlets with this information.

But the whole problem with trying to keep people in homes is information and education. The programs exist, but people don’t know about them. They don’t read the fine print in these instances because they’re so focused on losing their homes. We’re making sure that people know about things like Community Legal Services. We’re giving them information on rentals. They don’t know that they can call constituent services here and get help. We want people to be able to keep their homes and families.

SUN: I understand that there have been a series of lawsuits filed against you. I know that you can’t really talk about them because they’re in litigation, but how do you feel about how these suits have been presented?

RB: The press piles it on. I’ve spent my entire life standing up for people and making sure they’re fairly treated. If you’ve known me for a long time, you know that these suits are unfair, and I’ll deal with that part in court.

SUN: I know that you’re probably not thinking about re-election right now. But what do you hope to accomplish as you go into your second year?

RB: I want to continue moving the office forward through innovation. The pandemic forced us to think outside of the box; not looking at how things were done in the past, but toward the future.

Technology is a huge area that we needed to tap into. When I came here, most of the computers were still operating on Windows 7. We’ve given officers what they’ve needed in terms of equipment. The Sheriff’s Office is a part of every major event in the city, and yet we didn’t have the equipment we needed to handle large situations. We play a major role in pandemic assistance, and [during] this summer’s uprisings.

One of the things that we’re getting ready to announce are virtual sheriff’s sales. The sheriff’s sale is going to be all virtual. If there’s ever a breakdown, we have a plan B and a plan C. People will be able to bid on properties from home.

SUN: When will these virtual sheriff’s sales start?

RB: We’re going to start virtual sheriff’s sales in April. Soon, we’re going to start educating people on how to go online and purchase properties during the sheriff’s sale. We’ll be holding two town hall meetings and meetings with community organizations via Zoom to show them how constituents can purchase properties online. We’ll also be putting the information on how to participate on the City Council website so that people can be educated on how to bid on properties.

SUN: How will these sales be advertised? One of the things that got one of your predecessors in trouble was his expanding the access to sheriff’s sale ads.

RB: When I ran, I ran on not spending $7 million on advertising to take people’s homes and sell them. I cut the advertising budget by a third and I’m going to cut it more now that we’re going digital with the sheriff’s sales. That’s because a lot of these costs were put on the back of the homeowner. The location rental, the auctioneer, all of that was on the back of the homeowner. We got rid of DART, the Defendant Asset Recovery Team, because the homeowner is not a defendant.

We only have to advertise in two papers: one of general circulation and the legal newspaper. But my predecessor started advertising in local papers, and I’m going to continue to do that because a lot of people in the neighborhoods don’t read the general circulation paper or the legal paper.

SUN: You mentioned that your office is still doing food giveaways.

RB: We’ve been doing food giveaways since the pandemic shutdown. We were assisting the city in March and started ours in April. At first, it was every two weeks, but the partner that we’re working with asked us to do it every week. When we saw that the courts were shut down and the city was shut down, my concern as a child of North Philly was “How am I going to feed my family?” That’s one of the biggest fears.

We’re partnering with Caring for Friends, Local 57, my favorite organization, the Guardian Civic League and the Fraternal Order of Police sponsors gift cards with some of the giveaways. We’ll do it until we can’t do it anymore.

SUN: Now this is Women’s History Month, and you’re the first woman that’s ever been elected to this office. Once you are no longer in this office, if another woman approached you about running for Sheriff, what advice would you give her?

RB: First of all, I would tell her that it’s a great idea and that she should do it. But I’d also tell her that you need to be in touch with your community before you run, and not just asking people for a vote. You should be volunteering your time now. Don’t just wait until you’re running for the position to connect. A lot of people run just for the position, but not for the people. I think that I won this office more for the work I’ve done in the community than anything else.

And then, I’m going to help her. Because that’s my responsibility.

SUN: Well, thanks again for the time, Sheriff Bilal.