Making a difference: JEVS and the Supports Your Way program 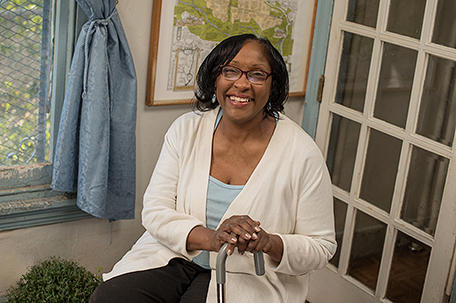 Rosalind McKelvey was born into a tradition of advocacy. Her mother was the late Florence Garrett, a tireless activist and community leader in Northwest Philadelphia. McKelvey took her mother’s lead and has been at the forefront of Philadelphia’s deaf community for decades.

“We were the first Blacks to move onto Mount Pleasant Avenue,” McKelvey said. “My mom started taking on block captain duties and worked with the neighbors. One day I looked downstairs, and there were some deaf people. Their hands were moving as I was looking over the banister, so, I asked [her] ‘what were they doing?’”

When she got out of high school, McKelvey went to work at Gino’s [a local fast food restaurant which was located across the street from the then Pennsylvania School for the Deaf campus]. She asked her boss when they came in signing amongst each other, ‘How do they place their food order?’ She was told that they just wrote down what they wanted.

That didn’t sit well with McKelvey.  She decided to teach herself sign language in order to communicate with these neighbors, the very same community she saw her mother advocate for that day in their living room. She later worked for the school for over 20 years in total, not including a brief hiatus when she focused on her raising her young family.

What was once a passion for advocacy became a life vocation and extension of her deep religious faith. Over the years, McKelvey — a resident of Germantown for the last 32 years – has also been a foster parent for 14 special needs children, and instituted ministries at five local churches with the goal of ensuring that the worship experience of hearing impaired parishioners and church members was all it could be.

It is also why McKelvey is the recipient of this year’s Federal Emergency Management Agency (FEMA) National Emergency Preparedness Champion award for the East Coast.

Because McKelvey is not only a tireless advocate but is also a natural-born leader and problem solver, she was able to come up with a solution when advocates for the hearing impaired came to her with concerns about the Office of Emergency Management and its ability to help the deaf.

She put together a plan of action.

“There was no interpreter in Philly, [so] we started an advisory board,” McKelvey said. “It was a small group at first, turned into part of the Red Cross and then we moved beyond Philly.”

The life of any activist or advocate is demanding. The hurdles become even higher when personal issues like a full-blown health crisis or financial difficulties rear their heads. Even a simple setback becomes a major issue for those who are more used to being on the giving rather than receiving end of assistance.

In 2009, McKelvey suffered a leg injury at work which left her permanently disabled.

It was a huge blow. Not only did she find herself having to struggle with financial hardship, but her work as an advocate was severely curtailed as a result. Every day brought new challenges and frustrations.

One of McKelvey’s foster kids told her about JEVS and how they could help her. After learning what they had to offer, she decided to take advantage of their Support Your Way program.

“The folks involved with Home Modifications came in for an evaluation,” McKelvey said. “I can’t sit normally because my knee hurts, so first thing they provided was a raised toilet. Next, I used to have issues falling in the shower and I wanted to be safe, so they installed bars and a seat. I didn’t have a handrail outside so people literally wouldn’t come to my house anymore. JEVS immediately took care of a rail on the porch and people started coming over again.”

The organization also helped McKelvey by installing a chairlift.

“I even have company over again because I’m not afraid to go upstairs and use the restroom – or go get something to show them. I can stay in my home!” she said.

Having a home health aide has also helped immensely. McKelvey is passionate about the importance of helping elders like herself remain in their homes.

“You can’t take the wisdom out of the community,” she said. “When you lose your home and independence you lose so much. JEVS listened…that’s all it takes sometimes.”

The assistance has relieved many stressors that were interfering with McKelvey’s quality of life, enabling her to continue her work in the community with organizations like the Wakefield 49ers Community Improvement and Development Association and Germantown Deaf Ministries, among others.

People who work in the helping professions or have dedicated themselves to a life of advocacy are often reluctant to reach out for assistance for themselves. McKelvey is glad she did.

“The world has given me so much and now I’m able to keep up and still give back!” she said. “Germantown Deaf Ministries turns 20 this year and I have a group of handicap volunteers that I’m now teaching about services available like JEVS. They believe me because I live it.”