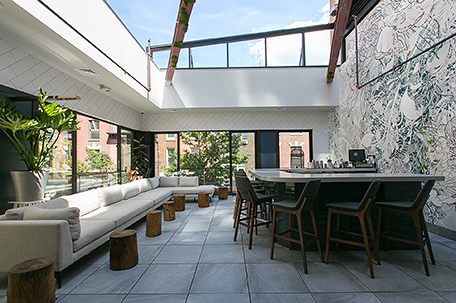 ABOVE PHOTO:At chef Sylva Senat’s modern American showpiece in Midtown Village, the food and drink include pizza noir, Frenched whole dorade and charcoal and shiso-infused cocktails. The elegant venue is open-air, on demand, thanks to wide glass doors and a retractable roof.  (Credit: Photo courtesy Maison 208)

Sylva Senat is neither the first nor the only revolutionary chef to move toward a more open-minded approach to American cuisine by adding a French-inspired twist in Philadelphia. But no one is leading the charge with more energy, daring or talent.

From fine dining to the quintessential Philadelphia cafe, Senat has done it all. With an impressive resume and endless skills, he recently opened his own fine dining restaurant — Maison 208 — which provides an opportunity to showcase the 40-year-old chef’s story and his vision for the culinary future of the city.

Maison 208 is a nice addition to a thriving and vibrant 13th Street corridor of shops, cafes and restaurants. It offers a menu of classic American comfort food with  French-inspiration. The stylish, two-story restaurant located at on 208 South 13th Street allows Senat’s experience to shine, while offering enough choice to keep the interest of even the most sophisticated foodies. 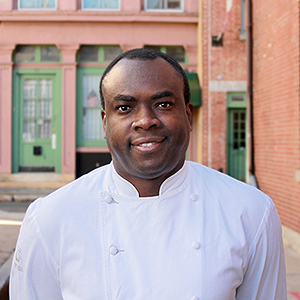 Chef Senat has built an impressive resume filled with five-star restaurants, including New York’s Sign of the Dove, Aquavit, Jean Georges at Trump Hotel, and Mercer Kitchen. The French-speaking native of Haiti, who grew up in Brooklyn, was part of the opening team of the Manhattan location of noted restaurateur Steven Starr’s Buddakan in 2006. After working in France and San Juan, Puerto Rico, he returned home and landed in Philadelphia at the original Buddakan on Chestnut Street. From there, he moved on to the glitzy, Indian-inspired Tashan on South Broad Street, which he left two years before its 2015 closing. He then consulted on other restaurants in Philadelphia while preparing to open Maison 208

Maison 208 has two floors showcasing three full-service bars and outdoor seating, plus a retractable roof — the only one in the city. The upstairs space known as “The Social” is available for private parties. An ornate mural on one of its walls was painted by the Mural Arts Program’s James Burn.

Senat, a kitchen-trained chef who has learned from the best, defines the spirit of Maison 208 as basically a fun, inviting neighborhood restaurant.

The second level is characterized by Senat as an “adult hangout” for cocktail service. Organic wines are served by the glass or by the bottle. According to the chef, there are actually two bars on that level — a large bar and a smaller one in what is being called the sunroom, next to the retractable roof.

There also is a separate menu of ‘international bites” with items like sliders, a small cheese plate, and a smaller salad.

“It’s more about having a little amuse-bouche and less about full fine dining,” said Senat.

On the lower level, the venue is more traditional full-service dining.

“We have limited seating downstairs, so upstairs is really part of our waiting area for downstairs,” explained Senat, who admits to wanting to keep the environment light, but elegant with a menu that will be more new American.

The Haitian-born chef and his siblings — three sisters and two brothers — moved to Brooklyn with their father when Senat was 9, shortly after the death of their mother.

Senat admits that his culinary palate was not quite developed, recalling one of his first forays into American cuisine: “cheesy pizza” from Pizza Hut.

He became interested in cooking as a young boy and took a high-school class that jump-started his interest in the culinary arts.

“I think it was my sophomore year, and by my junior year I realized I enjoyed it, and it really took me less time to put recipes together than the rest of the class,” said Senat, who remembers the encouragement he received to enter culinary competitions from program faculty.

The competitive culinary activities placed Senat in the orbit of Richard Grausman, founder of the Careers through Culinary Arts Program (C-CAP). The program helps student through culinary training, career advising and mentoring and scholarship opportunities. It also connects them with program alumni to help empower the to achieve success in the industry.

“[C-CAP] just opened so many doors. And, at 18, my very first job through C-CAP was at the Sign of the Dove in New York,” said Senat, who is an alumni board member and mentor for the  the program, which also operates in Arizona, Chicago, Washington D.C, Los Angeles, New York, Philadelphia and Hampton Roads Virginia.

At this year’s annual Philadelphia C-CAP student chef competition, Senat served as a judge, along with other program alumni who represented an array of culinary establishments from haute cuisine restaurants to neighborhood bakeries, and every manner of eatery in between. 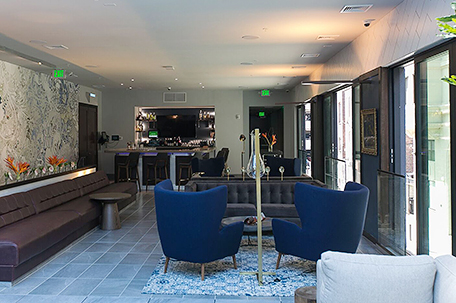 When speaking about career possibilities, students admitted being in awe of Senat, who many had seen compete on season 14 of the Bravo TV Network series “Top Chef.” They were proud that a culinary celebrity was a program alumni member and were encourage by what they believed his participation represented.

During Maison 208’s development, the restaurant project encountered some serious setbacks. A fire destroyed the building and required total reconstruction.

A decision was required. The factors to be considered included the goal of developing a first-class restaurant, the money and time required to complete the project and the fortitude to begin over.

“For a while, we were just like emotional men standing in the corner just staring at this building every day for months and months until we decided to continue with the project,” recalled Senat.

“We would say that we put, blood, sweat and tears in this building. It is not just a building. We built is from the ground up. And after we were done, we had to do it again,”he said, noting that the decision that he and his business partner Herb Reid of the Maze Development Group reached was agonized over and well thought out.

When Senat locks the doors of Maison 208, his family life begins. He and his wife, Sandar Tsuda-Senat, have a 7-year-old daughter, Isabella.

The industry, according to Senat can place unreasonable demands on professionals and their families. He is grateful to his wife, who, he said, has adapted to the moves required by his career.

“Usually, we’re moving to another state every time I work at a new restaurant. So it was nice to actually stay in Philadelphia this time,” said Senat, who also bragged — in a proud, fatherly way — about his daughter’s foreign language studies.

“She has to learn four languages — mom is actually Japanese, so she’s going to Japanese school, and she just won second place in a haiku contest,” said Senat, noting that while Isabelle speaks Creole, French and English fluently, she is currently learning Spanish, which is her fifth language, at school.

“Exceeding the customer’s expectation” is a phrase that is often heard in the food service industry. Senate and his Maison 208 staff are working to ensure that the idiom is taken to heart and demonstrated in the service to its customers.

Senat’s aim is to ensure that every guest leaves Maison 208 satisfied. The diners’ reviews are an indication that he is meeting his goals. On popular Internet sites such as Yelp, the guest reviews indicate that Senat is offering meals that “resonate with them and he also is serving food they “crave.”

If diners’ reviews are any indication, Maison 208 has hit that level of being a culinary experience. And with the talent behind the scene, it will undoubtedly be a staple on the Philadelphia restaurant scene for many years to come.