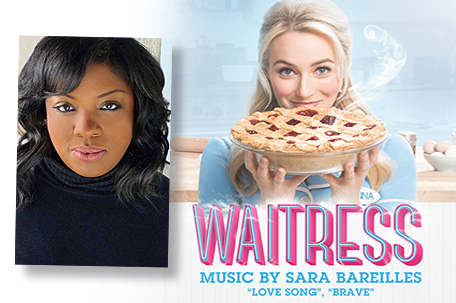 In 2007, the film “Waitress” was released in theaters.

Written and directed by Adrienne Shelly, “Waitress” tells the story of Jenna Hunterson who works at a diner in a small town. Jenna uses her time at the diner to conceptualize delicious pies, and as a means of escape from her husband.

In 2013, the film “Waitress” was adapted into a musical and made its debut on Broadway in April 2016. The Tony-award nominated musical directed by Diane Paulus and led by an all-female creative team, adds another dynamic woman to the mix with the addition of Maiesha McQueen.

McQueen, who is joining “Waitress” on its first national tour as a member of its ensemble cast, will be among those performing when the play makes a stop at the Forrest Theatre here in Philadelphia. She sat down with the SUN for an inside peek into the world of “Waitress”.

McQueen was born in New Jersey, raised in Atlanta and introduced to musical theater in her sophomore year at a performance arts high school.

Her path to the cast of “Waitress” was a bit circuitous, she said.

“My path was a little different. I went to New York University for theater, but I always worked with young people even through middle school and high school,” McQueen said. “When I graduated from college, I actually went straight into teaching and taught full-time for several years. I definitely auditioned while I was in college and was in shows while I was in school, but I needed a season of trying to figure out exactly how I wanted the arts to be a part of my life.”

Thankfully, McQueen found exactly where art fit into her life and her love for art in general, and for musicals in particular, brought her back to the stage. She’s enjoying her time in the cast of “Waitress”.

“This is a great musical, the music is beautiful, the story is uplifting, invigorating and if you’re going to do the same thing eight times a week, you better make sure that it’s something that you enjoy,” McQueen said. “That was always important for me… being able to tell a story I wouldn’t mind telling and I feel like “Waitress” is one of those stories. I think one of the things that I love about the story is that it’s real. It deals with things we have to deal with every day… the journey of finding strength and courage is not always a pretty one. You never know who you’re going to meet that’s going to take you there, but it’s about trying every day to discover or rediscover who you’re really supposed to be and what your purpose in life is supposed to be. “Waitress” is definitely a human story.”

In addition to the humanity the storyline of “Waitress” possesses, the original music and lyrics elevate the show to another level. Music and lyrics for the show were all written by musician/singer/songwriter Sara Bareilles, a six-time Grammy nominee.

“I didn’t really discover how brilliant and masterful of a musician, artist, writer, singer, arranger and composer Sara Bareilles was until I got introduced to “Waitress”, McQueen said. “She’s just a fantastic artist and human being. We had the luxury of having her in the room a lot when we were rehearsing for the tour. It was so wonderful to have the person that the music came from, coach you and give you direction and help you understand the music… it was absolutely wonderful!”

“‘What Baking Can Do’ is the first song that the lead Jenna sings and it basically outlines why she is who she is and why she is where she is at that moment of her life,” she said. “It tells you about her fascination with baking, and the purpose that it plays in her life as a joy and as an escape. So we really get inside of Jenna’s mind and it’s not only musically brilliant, it does a wondrous thing within the entire arc of the show.”

“Waitress” has all of the components of a great story. There is love, lots of laughs, the concept of overcoming hurdles, and the importance of fighting one’s way to self-discovery and triumph. It also reinforces the power of friendship, small acts of kindness and pie… and who doesn’t love pie?

Maiesha McQueen’s role in “Waitress” is just one of many to come… we are sure to see much more from her in the near future! Follow her journey at her website www.maieshamcqueen.net and on Instagram @mai_thegem. “Waitress” will be at The Forrest Theatre from Tuesday, February 13 through Sunday, February 18th. For more information on tickets and showtimes, visit www.kimmelcenter.org.