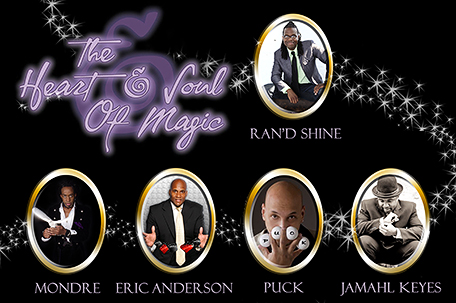 ABOVE PHOTO:  Courtesy of Heart and Soul of Magic.

On Independence Day, you are invited to take a trip into the Soul of Magic.

Did you know that the first American-born magician was African American?

Well, he was. And for his first trick, he escaped from slavery. Henry Brown lived on a plantation in Virginia, where he had a wife and family. When his owner decided to sell his family away, he decided that he was going to escape, no matter what.

So Brown built a three-by-two box, got into it, and mailed himself to Pennsylvania, where literally set free by abolitionists. He used the box in which he escaped to freedom as part of his magic act.

For more history lessons like these, and a chance to see some of the best African American magicians in the country, spend your Independence Day evening in The Heart and Soul of Magic.

This event, the final performance event of the Society of American Magicians convention, will be held on Saturday, July 4 at 7:30 p.m. at the Marriott Hotel, 1201 Market St.

While the history of magic in the United States begins with a freed slave, it’s not a history that’s commonly known, said Randy Shine, a magician that performs as Ran’D.

Shine discovered magic as a graduate student at Penn State University through a friend who had a magic club on campus. That interest was reinforced through an article in a magic magazine that featured a magician named Hiawatha Johnson Jr., he said.

“He was dressed in African garb with a walking stick and I thought, wow! A black magician!” Shine said. “Like anything else, if you don’t see it, you don’t know that you can be it. Our kids see things like rappers and ball players, but they don’t see magicians.” 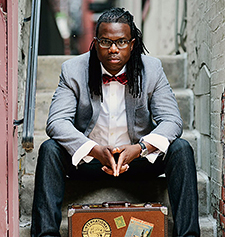 Ran’D Shine (Photo courtesy of Heart and Soul of Magic)

But when he went to magic conventions, he noticed that he stood out a little.

“I would go to events like the society of the magic conventions and would only see a handful of African American participants,“ he said. “I wondered, why aren’t more of us here?”

To change that, Shine put together the first Heart and Soul of Magic show in 2000. The show combines a group of the best African American magicians in the field and features a variety of styles of magic that has something for everyone.

In addition to Shine, who serves as the master of ceremonies for the event and performs an act that fuses magic and comedy, this year’s show features Puck, a magician that was a finalist on the show “America’s Got Talent, Mondre, a magician who recently performed for Monaco’s Royal Family, Jamahl Keys, a magician who uses Harlem Renaissance influences, such as jazz and big band music as a part of his performance, and Eric Anderson, one of the world’s best mentalists.

Tickets for the show are $25 and can be purchased by going to magicsam.com/annualconvention.