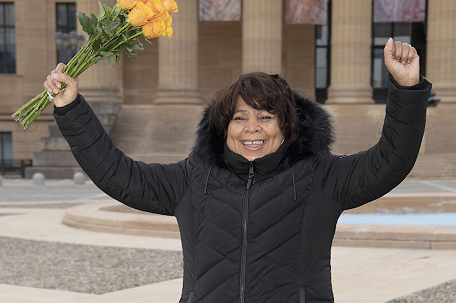 Although you may not know it at first due to her unassuming personality, Lynne Carter —  the world renowned three-time Hall of Famer and the first African American female boxing judge with the World Boxing Organization —  has broken barriers in the male dominated sport.

Carter will be inducted into the 6th Annual Atlantic City Boxing Hall of Fame during a celebration weekend taking place from October 7 through October 9 at the Hard Rock Hotel & Casino in Atlantic City. The induction ceremony will be held on October 9.

Her judging style distinguishes her from the rest in the boxing profession, which has earned her many accolades and recognitions.

In 1984, through the Philadelphia Bar Association, Lynne was honored with some other distinguished African American trailblazers in their respective fields such as Mae C. Jemison (the first Black female astronaut) and Dr. Helen Dickens (the first Black woman to graduate from the University of Pennsylvania as the first Black OB GYN).

Carter has also been hailed as a pioneer by Philadelphia Mayor Jim Kenney, being the first female boxing judge to officiate a fight in Pennsylvania in 2019.

Carter’s versatility and passion as a boxing judge led her to create a foundation called “A Fight For A Cause” Foundation. She raised money for autism research and created an autistic after-school program in West Philadelphia.

Carter also donated money to parents of autistic children and those with special needs and raised money for the victims of Hurricane Katrina in New Orleans in 2005.

Last week, I sat down with the astute and keen boxing judge from Mt. Airy to discuss  her career and what this new honor to the Atlantic City Boxing Hall of Fame Class of 2022 means to her.

SUN: Lynne, what was your reactio when you learned that you would be inducted into the Hall of Fame for a third time?

Lynne Carter: l was so happy and excited when I got the call, especially for Atlantic City, because I was the first African American female boxing judge in AC and the second woman. I was so excited that I started calling family and friends and letting them know that I was being inducted.

SUN: What does this induction mean compared with the state of Pennsylvania and New Jersey Boxing Commissions Hall of Fame inductions?

Lynne Carter: When I first started my boxing career in Philadelphia, my goal was to get to Atlantic City to get the big fights. When I met Percy Richardson and Jersey Joe Walcott and I was on my way to Atlantic City.

I cried like a baby on the way back in the car that night because it was tears of joy that I got my license to officiate fights in Atlantic City. I rode down with legendary refs Frank Cappuccino and Rudy Battle, but they weren’t paying attention to me until I screamed it out.

SUN: What was the response from boxing fans when they saw you judging the fights back then? What was it like judging your first fight?

But then later, one of the guys said, ‘listen, pay attention to Lynne Carter. okay, because she calls it.’ It went from, ‘she don’t know nothing about boxing’ to later, [when] they [gained] respect for me. What was most important for me was gaining the respect of the men.

“[Judging] my first fight, I was so, so nervous, that I couldn’t reach for the glass of water, because my hand was stuck in mid-air. It wasn’t until the bell rang, that I was okay. I couldn’t do nothing. I took my father to the fight, because I was too nervous.”

SUN: What’s your mindset when judging a fight and what do you look for from fighters to obtain points to win a round and the fight?

Lynne Carter: Well, my first mindset is to focus, pay attention and concentrate. Then, [when it comes to] the people screaming in the background, I block that out. And then, we have criteria that we look for and I apply my criteria and that’s it. And most of the time, I’m the first one to hand in my score card.”

There was one fight I was judging early on, [when] the fighter got hit right in front of me, and bam!, the punch hit him and he bent down and his trunks split in front of me and that’s what I saw– use your imagination (laughing out loud).

I can’t believe that this is my 3rd induction to the Hall of Fame. It’s so special to me, because I was the first Black female there. I never would have thought that when I first started officiating boxing, that I would have gotten this far with it to be in three Hall of Fames.

I just couldn’t imagine three. My intention was just to go and judge fights — because they said I was good at picking the winners.

Lynne Carter: When I first saw who was going to be joining me in the class, I was really excited, because I had no idea that I would ever be inducted in a class with Lennox Lewis and Julio Cesar Chavez. In addition to that, like James Toney and a few other fighters that I actually judged their fights.

And a couple of other people that I worked with like Harold Lederman. He and I were good friends along with Tom Casino and Domenic Colett.  I was really excited and impressed by this class that I was going into.

Carter was trained by Carol Polis, the first woman boxing judge in America and trained by legendary heavyweight champion of the world, the late “Smokin” Joe Frazier. Carter was destined for greatness.

SUN: What was it like learning from Carol Polis and Joe Frazier?

Lynne Carter: Well, Carol is a great person. She was the first woman (boxing judge) out there in the boxing world, and we went to two conventions together. You know, she basically took me under her wing and she’s taught me some of the things I needed to know as far as judging fights.

And then Joe Frazier — the first thing he said was, ‘I don’t like judges. I do like referees, and I don’t like announcers.’ But I said to him that I wanted to be trained. And I want to be trained by the best. And he trained me.

He made me get in that ring and put the gloves on me and after that, he would show me the areas where the fighters would be hitting in the zone. And he was just wonderful.

And he showed me the basics of boxing. He said, ‘I ain’t no judge, but I know how to fight.’

Lynne Carter has judged fights in six different continents around the world and fighters in about every weight class.

SUN: What was one of the most memorable fights for you to judge and why?

Lynne Carter:Mike Tyson — because he was absolutely awesome. That fight took place in Atlantic City. I judged a couple of his fights, right before he got the heavyweight title. People would walk in to see the fight, and he already knocked the person out.

SUN: What’s the reward of giving back and why did you choose to focus on the autistic and special needs community with your foundation?

Lynne Carter: I was always interested in autism, because, I saw something on TV about a lady with an autistic son who lived in California and had to travel to New York to get help for her kid.

[Her] need for financial help [and] get treatment [but] couldn’t afford it, was the reason that made me decide to give back to the autistic community.”

For the fighters out there that  may one day be the judge on your boxing card, remember this — to win your fight, you’ll have to impress boxing judge, Hall of Famer Lynne Carter.

Her next fight as an assigned judge takes place on January 22 at the Borgata Hotel & Casino in Atlantic City, New Jersey.