Lovett Memorial Library reopens after an extensive renovation, to an elated and engaging community of supporters 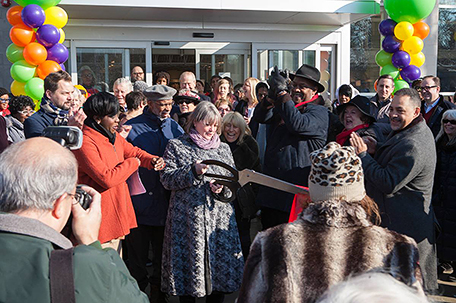 Tina Browning’s childhood is filled with fond memories of her weekly visits to the Lovett Memorial Library.

And returning to the library, just days after its grand reopening, her first visit there is still firmly etched in her memory.

“My first visit to the library was part of a school outing,” said Browning, who recalled being introduced to the card catalogue system and various book collections for young readers.

Joining Browning at the branch of the Free Library of Philadelphia were scores of East and West Mt. Airy residents who have called this library –some for decades –a routine gathering place to enjoy an array of educational, enlightening and entertaining programs and services. 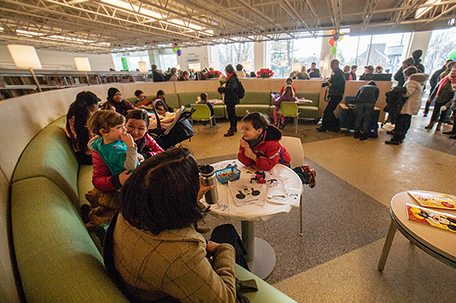 Many neighbors were wary when the project plan to close Lovett for renovations was announced, which meant a disruption in the vital services the library offered for two years.

John Gilbert admits he was among the skeptics.

“I initially questioned what a disruption in service would mean for me and the community that have come to rely on such a neighborhood social and educational staple,” he said.

But Gilbert –like many members of the community who attended Lovett’s reopening on Saturday, December 16th — believes his doubts were unfounded.

“The renovations transformed the facility into a technological marvel that drives a new environment that will engage the young  and old,”he said.

The ceremony was presided over by The Free Library of Philadelphia administration and Lovett staff, who credit the library’s extensive renovation project to the support of the “Building Inspiration: 21st Century Libraries Initiative.”

There was a visit from Mayor Jim Kenney and a host of other dignitaries, who came to praise the efforts of the cooperating private, government and public bodies that have been instrumental in helping The Free Library of Philadelphia transform traditional library buildings like Lovett into libraries of the 21st century. 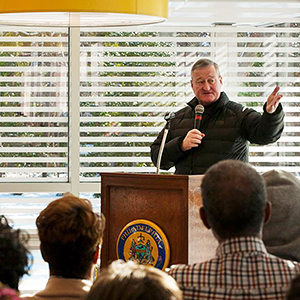 Lovett regulars and community leaders were provided guided tours of the renewed facility by Sandy Thompson, Northwest Neighborhood Libraries Leader.  As she led the tours Thompson explained how Lovett reflects a new mission for the city’s libraries.

“In keeping with our mission, Lovett will advance literacy, guide learning, and inspire curiosity. Our vision is to build an enlightened community devoted to lifelong learning,” explained Thompson.

Lovett now features a teen center, pre-K zone and a children’s library. There also are quiet spaces for adults and a program space that supports arts and crafts and special programming for children. On the second level of the new addition, there is a computer center with over 25 computers for community use. According to Thompson, a Digital Resource Specialist will operate the center and assist Lovett patrons with computer operation and leaning initiatives.

Lovett’s outdoor garden has undergone an upgrade of sorts. The benches have been upgraded and the grounds have been adorned with bright, colorful neon oversized wingback chairs that are a bit reminiscent of those mentioned in Lewis Carroll’s “Alice’s Adventures in Wonderland.” Plans for the garden include community programs and summer movie nights, according to Thompson.

The Building Inspiration: 21st Century Libraries Initiative goal is to transform traditional buildings into libraries of the 21st century. The Free Library of Philadelphia’s main headquarters on the Parkway is also part of the initiative, and renovations to the library system, led by architect Moshe Safdie have been ongoing since 2008.

There has been a newly opened South Philadelphia Library. Lovett is also one of four additional libraries that were renovated as part of the initiative. All libraries have opened with specific missions.

The funding for the projects was received from numerous donors, including a $25 million donation from the William Penn Foundation. 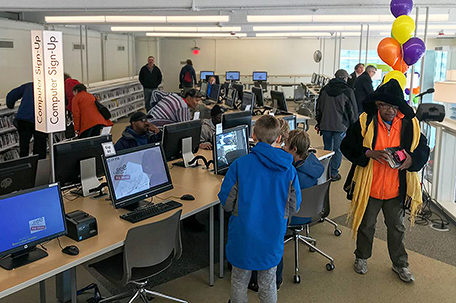 Like Lovett, each of the renovated libraries feature a teen center, pre-K zone, and a children’s library,  and has been renovated to address a specific community focus.

Lovett Memorial Library has a rich history and its mission of expanding the public’s reading and learning opportunities is just as relevant today as it was at its founding in 1887, when Charlotte Lovett Bostwick built and endowed the Lovett Library as a memorial to her brother, Thomas R. Lovett, who purchased more than 10 acres along Germantown Avenue for a family estate in 1864.

The Mount Airy Free Library was founded 23 years later by three women, one of who was Miss Louis Lovett, in a rented lumberyard on Germantown Avenue.  Another of the woman, Mrs. Sheldon Potter, served as volunteer librarian. She operated a small circulating library at her home for neighborhood boys. Potter was intent on raising their level of reading materials from the “dime novels”  which were all they could afford to more academic offerings.

The Lovett Library became a Branch of the Free Library of Philadelphia in 1924. A new addition was opened in 1961, and in 1982 the Friends of Lovett Library was formed. This portion of the old building now serves as a meeting room, which still holds some of the library’s original furnishing and artwork.

The Lovett legacy lives on in Mt Airy resident Allen James, who browsed the book offering in the children’s library with his six-year-old son Elijah. James believes introducing children to reading actual books is a necessary break from tablets and television and provides them with a greater option. 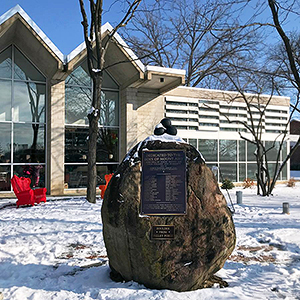 “I bring my son to the library because I want him to become an interested and engaged reader,” noted James, who believes introducing him to reading at this level with encourage him to become a lifelong reader.

Cheryl Browning — a 63-year-old retired higher education administrator who was encouraged by her mother and grandmother to become a voracious reader — echoed the sentiment,.

“My grandmother drilled into me and my siblings the importance of reading as a major foundation for life and all of its pursuits,” said Browning, who visits the library several times per week and still expresses her preference for books in written form.

“I enjoy what technology has provided the reader, but there is something about the feel of a book in my hands, the turning of its pages and what that book physically represents to me,” said Browning, who admits it’s a feeling of excitement that she has sustained since her first childhood visit to Lovett.

The Lovett Memorial Library is located in Mt. Airy on 6945 Germantown Ave. For information about opening times, call (215) 685-2095, or visit freelibrary.org.