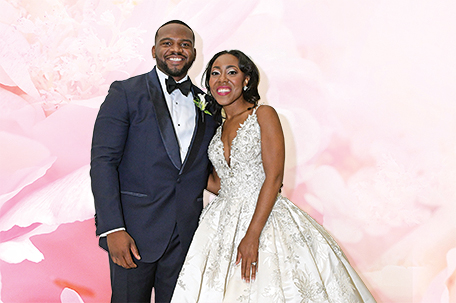 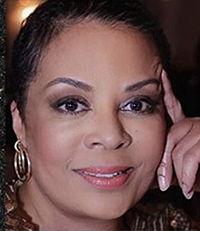 Ever since their engagement was announced in November 2017, the wedding day of Elynn Morgan Waller and Pastor Corey Maurice Johnson has been looked upon with much anticipation. There has been conversation about “Philadelphia’s royal wedding” among many who consider The Wallers to be one of Philadelphia’s first families.

A string trio played classical music as the bride’s mother and first lady of Enon, Dr. Ellyn Jo Waller, and the groom’s mother, Carla Lawton-Johnson, were escorted down the aisle prior to the ceremony. There was a touching tribute of light in place for the late Clifford Johnson, father of the groom.  The bridal party walked down the aisle strewn with white rose petals with grace. 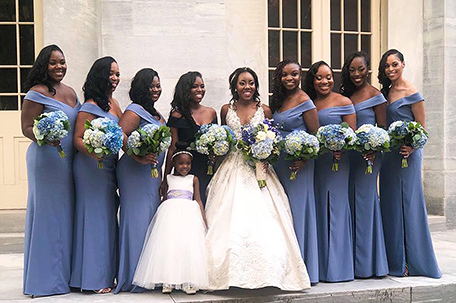 Everyone was awestruck as the Rev. Dr. Waller escorted his daughter down the aisle. Elynn was radiant in her regal, fairy princess-like bridal gown. Every detail of the full skirt, shimmering embroidery, flattering fitted waist and jeweled straps were stunning. The bride carried a lush, hand wrapped bouquet featuring blue hydrangeas, white roses and calla lilies. 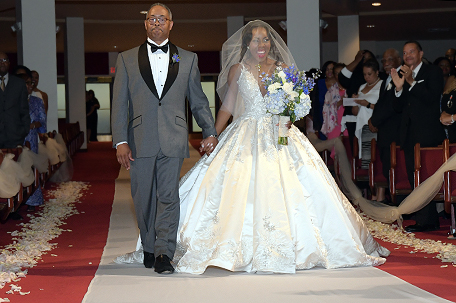 The couple has a wonderful foundation to build upon and a bright future. Elynn, 27, is a native Philadelphian. She earned her undergraduate degree from Auburn University in Alabama. She pledged Delta Sigma Theta Sorority, Inc. at Auburn and I learned that approximately 28 of her line sisters traveled from Alabama (one from Georgia) for Elynn and Corey’s special day. 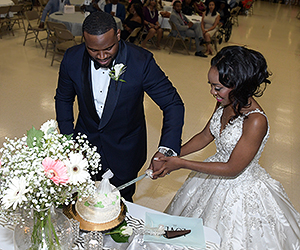 I had the opportunity to ask Rev. Dr. Waller about his reflections at the church reception. “This is a wonderful day. I am so excited for my daughter Morgan and, now, my son-in-law Corey. They are both ready for this moment. We have watched Morgan grow up all her life and I have watched Corey for the past six years. It’s just a beautiful day to celebrate God’s honor and glory,” he responded.

It truly was a beautiful day and Pastor and Mrs. Corey Maurice Johnson are wished all the very best!