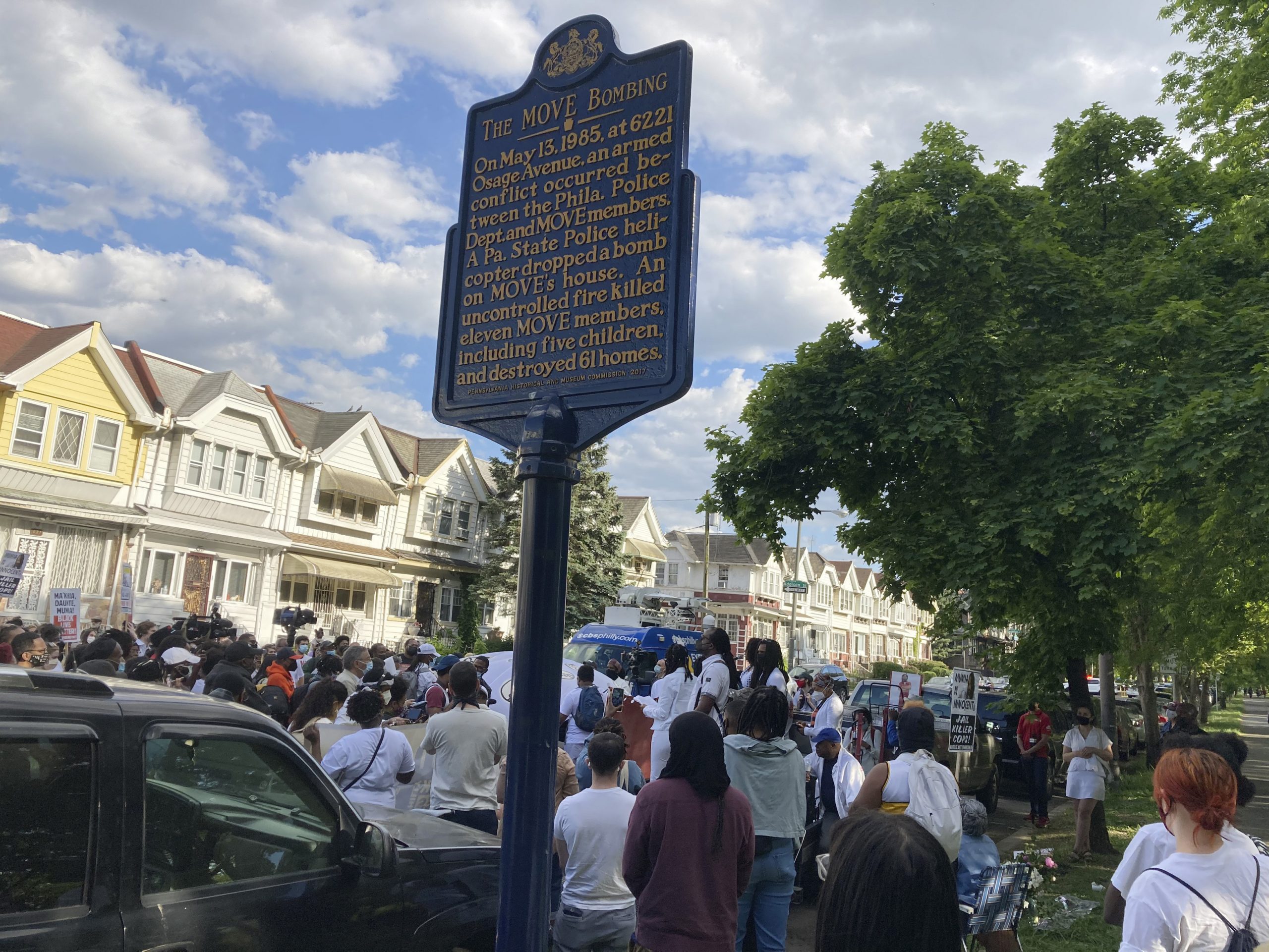 The City of Philadelphia is investigating how a box containing the remains of MOVE members killed in the 1985 bombing ended up at the Medical Examiner’s office…and how they almost ended up disposed of.

ABOVE PHOTO: A crowd of people gather near the site of the 1985 bombing of the Black organization MOVE’s headquarters in Philadelphia, Thursday, May 13, 2021. The group met on the 36th anniversary of the bombing that killed 11 people and sparked a fire that destroyed nearly 65 row homes. Members learned this week that that remains belonging to those members who were killed in the bombing had been destroyed at the direction of the city’s Health Commissioner Dr. Thomas Farley. (AP Photo/Claudia Lauer)

By Denise Clay-Murray
For members of the group MOVE, last Thursday, May 13, was already a tough day.

On May 13, 1985, 11 members of the group — five of them children — were killed when Philadelphia Police chose to end their standoff with the group by dropping a bomb on the house they occupied on the 6200 block of Osage Avenue.

So, the revelation that there were unclaimed remains of MOVE members in the city’s Medical Examiner’s office, and that those remains had almost been disposed of, added insult to injury, Mike Africa said.

“We found out about it on May 13, which is a heck of a day to deliver some news like that,” Africa said. “That’s incredible news to deliver to a family that’s grieving.”

Last Thursday, Mayor Jim Kenney announced the discovery of the remains and the resignation of Health Commissioner Tom Farley during a news conference. According to the Mayor, Dr. Farley had discovered the remains during the Administration’s first term.

What made Kenney and Dr. Farley part company was what the Health Commissioner chose to do with the remains once they were discovered. He ordered them cremated instead of attempting to find next of kin.

“This action lacked empathy for the victims, their family, and the deep pain that the MOVE bombing has brought to our city for nearly four decades,” Kenney said.

In addition to Farley’s resignation, Medical Examiner Dr. Sam Gulino has been placed on administrative leave and Dr. Cheryl Bettigole has been appointed Acting Health Commissioner.

The family is cooperating with the City in an investigation spearheaded by Dechert LLC, Africa said. While he didn’t disclose where the remains are or what has happened to them since their discovery and last Thursday’s press conference, Africa did say that the next of kin are taking charge of that.

“I cannot imagine that it means much, but I also offer a formal apology to the Africa family and members of the Movement on behalf of the City of Philadelphia, not just for this disgraceful incident, but also for how administration after administration has failed to atone for the heinous act on May 13, 1985 and continues to dishonor the victims,” Kenney said. “I am profoundly sorry for the incredible pain, harm, and loss caused by that horrific day.”

Apology notwithstanding, the announcement brought a lot of questions, like, for example, what did the mayor know regarding these remains, and when did he know it?

Kenney claimed that he wasn’t made aware of the remains until last Tuesday at 5 p.m., and once he found out, he contacted Michael Coard, one of the attorneys working with the family. The result was an emotional meeting which included an apology and a promise to try and make things right.

The family made other demands, but Africa declined to disclose them, saying that they may change as the investigation itself progresses.

This is the second set of remains of MOVE members killed in the May 13 confrontation that have been discovered in recent days. Last month, the world found out that the University of Pennsylvania had kept the remains of some of MOVE members and had used them as part of anthropology research. The University, like the City, has since apologized.

Kenney releases updated statement: remains of MOVE bombing victims thought to have been cremated have been found