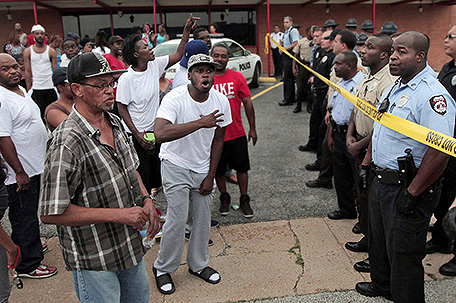 ABOVE PHOTO: A crowd is stopped by police as they were trying to reach the scene where 18-year-old Michael Brown was fatally shot by police in Ferguson, Mo., near St. Louis on Saturday, Aug. 9, 2014. A spokesman with the St. Louis County Police Department confirmed a Ferguson police officer shot the man. The spokesman didn’t give the reason for the shooting, nor provide the officer’s name or race. (AP Photo/St. Louis Post-Dispatch, Huy Mach)

Suppose non-voters in this country were treated like scofflaws. That is, failure to show up at the polls resulted in a summons and a fine; say $50, $75 or even more. Would more of us show up at our local voting stations on Primary Election day and on the first Tuesday of each November?

There is an election in the Commonwealth every six months. It’s been that way for more than a century. Yet too often, especially when the current president’s name is not on the ballot, we avoid the election booth as though it were ground zero for the Ebola virus.

That’s why the quest for any idea that will increase voter turnout has become even more desperate in recent years. So anxious in fact that some folks in several California towns are actually exploring ideas about how to add “incentives” such as having voters enter their polling receipts in a lottery where winners would receive some sort of “reward” for participating. Safeguarding against the obvious kinds of abuses for such “rewards” are the main worry with this approach.

This leaves compulsory voting as the only other alternative worthy of debate. In those countries where it is enforced voter participation is among the highest in the world.

Compulsory voting is a system in which electors are obligated to vote in elections or attend a polling place on voting day. If an eligible voter does not show up to vote, he or she may be subject to punitive measures such as fines or community service. As of last summer, 22 countries were recorded as having compulsory voting, according to one international survey.

Take Australia as just one example.

In the ‘land down under’, the 2013 federal election saw turnouts in the range of 92 percent where voters faced fines of up to $170 for not voting for their preference or registering a blank ballot signifying they did not like either candidate.

By contrast, Philadelphia experienced turnouts under 15 percent in several recent primary elections for row offices and judicial vacancies and a participation rate under 35 percent in the last contest for governor.

We’re a little more than a month away from another race for governor with the future of public education hanging in the balance. So, what should be done to muster a respectable crowd to the polls? Find better candidates? (Yeah…right, angels and saints don’t usually meet the residency requirements to run for office) Cut out negative TV campaign commercials? (The NFL will stop being a non-profit first.)

Not challenging the status quo is almost certainly a harbinger for more Ferguson, Missouri-like results, where a majority African American town of 22,000 citizens has one black on the city council, no blacks on the school board, no blacks in municipal executive positions and a 54-member police department with three black officers.

Why? asked one black newspaper columnist who spent time in Ferguson in the aftermath of last month’s police killing of college freshman Michael Brown.

So, how do we scale the twin mountains of apathy and disorganization when it comes to empowering African American voters?In Bolivia, voters don’t have to be reminded too often what can happen if they don’t show up at the polls so turnout has remained quite impressive. That’s because failure to vote without a valid health reason can prompt the local Bolivian bank to freeze a worker’s salary for 90 days. (No kidding.)  Brazilians can lose their passports; Belgians can have their voting privileges suspended indefinitely while various goods and services can be withheld from voting scofflaws in Peru and Greece.

Withholding a worker’s salary even for 90 minutes will more than likely start a fight (or at least a shouting match) in this country, so even if we didn’t have a Bill of Rights guarantee of free speech (which also includes the freedom not to speak) such draconian measures to compel voting clearly are not transferable to this continent. From grade school on, Americans are taught to view voting as a civic right rather than a civic duty. While citizens may exercise their civil rights (free speech, right to an attorney, etc.) they are not compelled to. Furthermore, compulsory voting may infringe on other rights. For example, Jehovah’s Witnesses believe they should not participate in political events. Forcing them to vote ostensibly denies them their freedom of religious practice.      In America, what would make sense is the amplification of shame. Simply put, as it was used a century ago, shame would be a tool to point the finger at lazy or uncaring adults with nearly the same level of rebuke reserved for child molesters.      Those persons who refuse (without valid reason) to take advantage of the franchise that so many marched, prayed and died to win, would dare not expose themselves in public for fear their civic delinquency would expose them to unbearable opprobrium. On election day, voters would display a badge, a label or a hat emblazoned with some public acknowledgment. Those without the appropriate indicator would be shunned as ancient peoples once segregated lepers.

The Next Voting Rights Movement