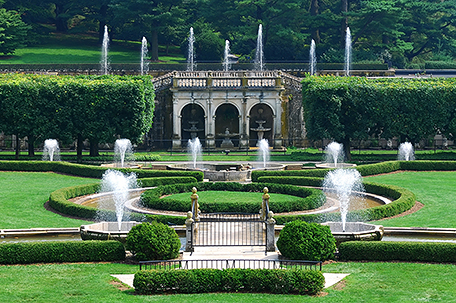 Ten organists from four countries selected to compete in June

Hailing from New Zealand to New York, the international performers will compete on the 10,010-pipe Longwood Organ for the $40,000 Pierre S. du Pont first prize.

All competitors will participate in the preliminary rounds June 18-19, with the top five competitors competing in the final round on June 22. The competition takes place in the magnificent Ballroom at Longwood Gardens near Philadelphia, Pennsylvania.

Tickets are available now at longwoodgardens.org.

“We are pleased to have these 10 outstanding young organists competing in this years Longwood Gardens International Organ Competition,” said president and CEO Paul B. Redman. “They are truly among the finest young talents in the organ world today. We look forward to hearing them perform and to helping further their music careers.”

The 10 competitors were selected by an audition jury comprised of five esteemed members of the organ community that anonymously evaluated the audition recordings, which included entries from 10 countries. The top 10 were selected to compete in the competition. The competitors selected include:

A pianist, organist, and harpsichordist, Rashaan Allwood has played in a variety of settings, including performances with the Kent Nagano and the Orchestre Symphonique de Montreal, and the University of Toronto’s Collegium Musicum. Allwood was the first prize winner of the Concours d’orgue de Québec in 2017 and of the Canadian National OSM Manulife competition in 2016 for the organ category. He is now one of the artists for Rice University.

Bryan Anderson enjoys a varied career as a concert organist and church musician. For several years, Anderson was an assistant organist at the Wanamaker Grand Court Organ. He performed at the OHS National Convention in 2014 and the AGO National Convention in 2012, and has been featured on APM’s Pipedreams. Bryan is employed as interim director of music of St. Thomas’ Episcopal Church and School in Houston, TX. He recently held positions at St. Paul’s United Methodist Church in Houston, and Wells Cathedral in Somerset, England.

The first-place winner of a number of international competitions, including St Albans (2017), Erfurt/Weimar Bach-Liszt (2015), and Sydney (2015), Thomas Gaynor is a doctoral student in David Higgs’s studio at Eastman School of Music in Rochester, NY, where he was recently awarded the highly coveted Artist’s Certificate—an honor the institution had not given an organist for three decades. Born in New Zealand, he began his organ studies at Wellington Cathedral. Currently, he is associate director of music at Christ Church in Pittsford, NY.

A. Nathaniel Gumbs is currently a candidate for a doctorate of musical arts degree, studying with David Higgs at the Eastman School of Music. Recently, he was featured on the American Public Radio broadcasting Pipedreams Live and is the recipient of the Service Playing and Colleague Certificates from the American Guild of Organists. Gumbs has been recently appointed the director of Chapel Music at Yale University in New Haven, CT.

Sebastian Heindl received his fundamental musical education as a chorister in St. Thomas Boys Choir Leipzig, and contributed as a youngster organist to the BBC TV documentary Bach: A Passionate Life with Sir John Eliot Gardiner at the famous Trost organ in Altenburg. Heindl recorded his debut CD at age 17 at Magdeburg Cathedral. Heindl studies church music at the University of Music in Leipzig, and in 2017 won the Northern Ireland International Organ Competition.

Grant Wareham is a recent graduate of Rice University’s Shepherd School of Music. While at Rice, Grant served as Moseley Memorial Organ Scholar and assistant organist at St Thomas’ Episcopal Church in Houston, and then as associate organist at Palmer Memorial Episcopal Church. Winner of both the First and Audience Prizes at the Albert Schweitzer Organ Competition in Hartford, CT in 2017, Grant is currently pursuing his master’s of music degree at the Yale University Institute of Sacred Music and School of Music. He also serves as organ scholar at Christ Church in New Haven, CT.

Longwood Gardens Lights Up the Holidays