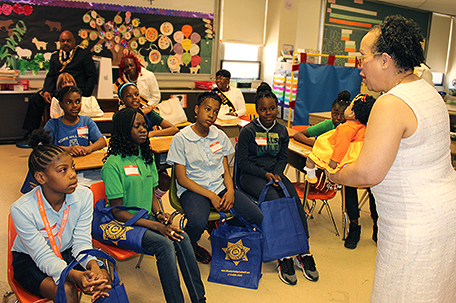 ABOVE PHOTO:  Valerie Langston explores the value of self-esteem with fourth-and fifth-grade girls using her extensive collection of black dolls during a mentoring workshop.   (Photo by Leona Dixon)

The students at Prince Hall Elementary school on this particular day exuded an air of confidence that spoke volumes about their self-esteem and their abilities. One might easily have speculated that such confidence would enable them to undoubtedly achieve great things despite powerful obstacles. Additionally, they also guessed that their self-assurance, in part, was due to the collective support of teachers, mentoring programs, community partnerships and a rigorous academic program. 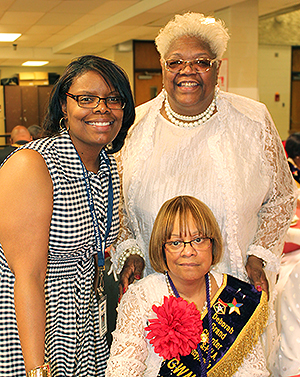 Two of the student supporters—the Prince Hall Grand Lodge and the Order of Eastern Star PHA-PA—received kudos from students and parents, for their annual mentoring programs, credited with contributing to the academic achievements of participating fourth- and fifth-grade boys and girls. The West Oak Lane school was adopted, over two decades ago, as part of the organizations’ community service commitments.

Two weeks ago, they conducted their annual mentoring event, a two-day program that accommodate over 120 students and compliments the their academic support base, according to school principal Donna Ragsdale, who explained that the social and leadership skills acquired by the students are re-integrated into the school’s academic curriculum. “It is our desire to provide diverse social, academic and career-related experiences through challenging interactions within the school environment that provide comprehensive counseling and mentoring while focusing on educational and professional opportunities for all students.”

The initial mentoring program was introduced by the OES PHA-PA 23 years ago and served girls only. Three years later the boys requested a comparable program of their own and the Prince Hall Grand Lodge signed on. That was 20 years ago. The long-term support fosters results that give students a hand up. With the continued backing, the mentoring program students graduate and make their way to competitive city middle and high schools, while following a college-bound track or other post-secondary school education and training.

“Such mentoring activities compliment the academics because students are undertaking skills that will prepare them for life with experiences that will help them successfully maneuver its challenges and roads,” noted event coordinator Marva Price-Montgomery, the program coordination, who is Grand Associate Matron of the Deborah Group of the OSA PHA-PA, also worked at Prince Hall for 23 years.

Philadelphia Sherriff Jewell Williams, who is a Grand Mason, participated in the program by making the male students honorary deputies for the day. The young men proudly presented an air of confidence, while sporting their symbolic, gold badges. 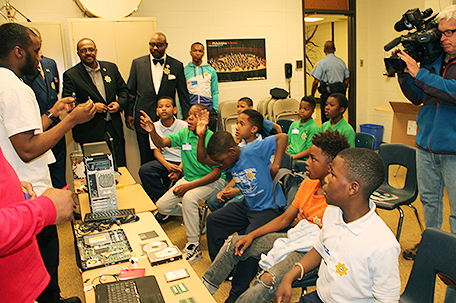 Students interact with mentor as he demonstrates how a computer is assembled. (Photo by Leona Dixon)

“When there is positive energy generated by such mentoring programs like this one, community partnerships and a rigorous academic curriculum demonstrate that Philadelphia elementary school children are clearly getting a well-rounded education,” said Williams.

Fifth-grader Sean Wilson explained, “This mentoring program tells us that the teachers and the community care about us and want us to succeed.”  Wilsons’ sentiments were echoed in a presentation entitled “Boys to Men”, a rap session that was led by motivational speaker Sterlen Barr, a Prince Hall graduate and president of the school’s alumni association.

“The importance of the message is that we have male mentors delivering a message to young men, many of whom don’t have father figures in their homes,” noted Barr. “Having men who step up to the plate and set good examples goes a long way towards helping young men relate to positive male figures who do great things in their own community.”

An etiquette class was held for both girls and boys. In addition to training the students in the art of fine dining, the class trained students how to socialize with confidence. They listened intently as instructor Lillian Miles explained the history of manners and their importance. She also led them though a mock exercise on how to approach a basic table setting.  As students, manipulated their utensils, approaching their simulated portion of meat, a rather tasty piece of pastry, they followed Miles’ instructions with precision.

“Our goal is to make certain that as students ascend the educational ladder that they do so with the life skills necessary to succeed,“ explained Miles, who retired after teaching 48 years in the Philadelphia school system, spending 43 of those years at Prince Hall.

Miles, who routinely returns the school to volunteer, was assisted by third-grade student servers Nakeir Patrick and David Broadway, who both are looking forward to participating in the mentoring program next year as fourth-graders.

Adding to students’ enthusiasm was the high caliber of volunteers such as Omar Simmons of PC Ambulance 1, a computer maintenance firm, who taught students how to assemble a computer.

“The importance of providing instructions on how to assemble a computer at this age is that by the time they reach high school and college age the experience will go a great way toward demystifying  computer science as a career,” explained Simmons, whose wife and son are both graduates of Prince Hall and are active in its alumni association.

Both day’s activities were topped off by a catered lunch that was prepared by a cadre of school volunteers and parents. The importance of this exercise, explained Price-Montgomery, was to encourage the importance enjoying a meal with others. “Dinning together as families is fast becoming a lost art, “offered Price-Montgomery, who believes everything must be done to ensure our children are exposed to the importance of such rituals. “Work schedules, social activities and school schedules often preclude us from sitting down to dinner as often as we might like, but it is important to make the effort as often as possible.”

In closing, Price-Montgomery offered a history lesson about the school’s namesake—Prince Hall, who is considered the founder of “Black Freemasonry” in the United Sates.  Hall founded The African Grand Lodge of North America and served as its Grand Master until his death in 1807. A tireless abolitionist and a leader of the free black community in Boston, Hall attempted to gain New England’s free and enslaved blacks a place in Freemasonry, education and the military. He lobbied tirelessly for education rights for black children.  Prince Hall Elementary is the only school in the Philadelphia School District or the nation to be named after the Mason (Prince Hall).