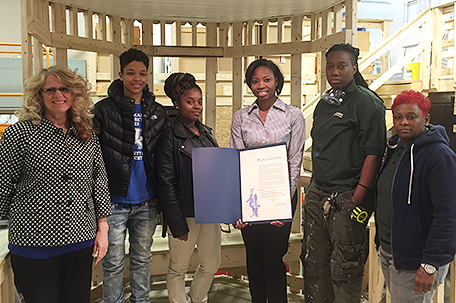 Women in Construction (WIC) Week, which was observed from March 5th-11th this year, is a fitting time for four Philadelphia women to graduate from a comprehensive carpentry training program.

For some of the women, it is an unexpected career path they are beginning. Others aspired to it in some form for many years. All of them were proud of their accomplishments so far, and are excited about the future.

Many of those original members were the so-called” Rosie the Riveters” who worked in the construction industry during WW2, said Piljo Yae, president of NAWIC’s Philadelphia chapter, chartered in 1967.

In the post-war period that followed, many women were forced to step down when the men returned. Those who remained found themselves relegated to more traditional roles.

“They were really marginalized,” Yae said. “Most women were in construction accounting, clerical, and insurance.  Very few were in the field, working with the men.”

In the Philadelphia region, women count for around 4.5 percent of the general construction workforce.

An eye on the future

Demi Price, 25, from the Olney section of the city, was in middle school first became interested in construction, and eventually participated in a Habitat for Humanity project.

In recent years, her interest piqued while watching many of the DIY programs on the air now. She knew that she could do the same if she had the tools. Furthering her education at Orleans Technical College was the natural next step in that process.

“I’ve always been creative,” she said. “I learned the basic construction formula [at Orleans] …I don’t mind taking the time to learn the basics first.”

Price likes the autonomy that construction work provides, where you can work independently, even if you are part of a team.

“You can [point to something in the project] and say ‘I did this,’” she said.

She is currently expecting a baby in June, but has not slowed down yet. She says that she will continue participating in projects until she is closer to her due date. Later this year, Price is looking to obtain employment and build up her portfolio and skill set for the next seven years.

Keisha Brown, 44, a correctional officer from Northeast Philadelphia, is interested in real estate investments and the house flipping business. Like Price, she was also inspired by DIY shows and decided to make the leap into formal study. Some of her co-workers were skeptical when she informed them of her intentions.

“A couple of guys at the job looked at me a little crazy… it took me a minute to think about coming,” she recalled. Finally, her mind was made up, and she enrolled at Orleans. At least one of co-workers tried to discourage her along the way with tales of woe about the construction business, but she did not let it stop her.

Her 10-year plan is to learn as much as she can about the business while working with a private contractor while maintaining her current correctional officer position for the time being.

“I want to get more hands-on experience before focusing on one discipline,” she said. “I want to master everything (but roofing – she did not enjoy that experience). It is a great trade to pursue, if it is your passion.

West Philadelphia resident Natasha Bass, 25, has spent her entire life with sickle cell anemia. Children’s Hospital has been a huge part of her support network over the years. Desiring to give some back to them, she began as a volunteer before being offered a full-time position there. She was given a chance to an earn a Surgical Technician Certification and took full advantage of it.

However, Bass wanted to take giving back to the family and friends that have helped her to the next level. She wants to reach her full potential, and these skills will help her to purchase an income property, a cafe, and a daycare center.

“It is a hobby that became a passion,” she said. 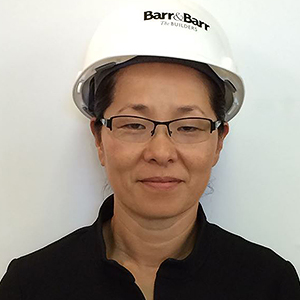 Despite evolving roles in traditional society, women still must be able to withstand a considerable amount of pushback when pursuing this career path.

“It takes a certain kind of women to work in a male-dominated industry,” observed Deb Bello, Director of Admissions at Orleans Technical College.

Women find themselves sized up according to their gender and physical status, and are often put to the test to prove themselves. However, at the end of the day, everyone shares a common desire to work together to complete projects efficiently and on time, regardless of any earlier misgivings.

“Men want to see that they can carry their weight,” she said.

Orleans currently has ten women enrolled in their construction track and would like to have more, Bello said. She explained that construction work is a perfect choice for women who have a passion for working with their hands and improving their skill sets on a continual basis, and are unafraid of getting dirty or the scope of the projects.

“Women [in general] naturally tend to take charge,” she said.

“It is the most complex and diverse industry that is out there,” added President Piljo Yae. “For the past 10-15 years, the way we build has been evolving with better equipment, sharper tools and computer programs which created a construction industry gender-neutral environment. The skills we learn become an asset to promote ourselves, and the salaries and benefits [help to] provide [good]middle to upper income.”

Orleans Technical College holds a monthly on-campus information session for women interested in learning more about the building trades and their training programs.

This month’s event will be held on Saturday, March 11th, from 10 am -12 pm. The campus is located at 2770 Red Lion Road Philadelphia, PA 19114, and is easily accessible by public transportation.