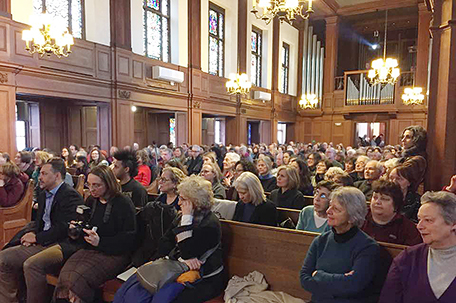 Over 300 people were brought together for a mass meeting at the historic Unitarian Society of Germantown with many concerns, but a singular goal – to study the Trump agenda, the issues impacted by it, and respond accordingly.

The meeting was convened by Indivisible NW, a grassroots organization of concerned citizens from the Northwest section of Philadelphia and vicinity. The group is one of the thousands such groups being formed throughout the country as a result of the mass movement which developed after the online publication of “Indivisible – A Practical Guide for Resisting the Trump Agenda.”

Created by two former congressional staffers, this guide — which began as a simple Google document — was a response to the incoming Trump administration and its agenda. They studied the successful methods of the so-called Tea Party movement carefully, then fashioned a guide for people to download and use as a strategic resistance tool both as individuals and in established groups on the local level.

At the beginning of the general meeting, special guest Pennsylvania Governor Tom Wolf thanked the crowd for their participation and enthusiasm.

“In every generation or so, it is incumbent upon us to really act as citizens and say we have got to either stop this or support this, and right now, we’ve got to stop this,” he said.

The governor also stated that in addition to mounting a resistance, participants needed to “create a compelling and persuasive vision for an alternative.”

“We were honored to host Governor Tom Wolf today to speak to our Indivisible group about his role as the last line of defense against the Trump agenda in Harrisburg,” said Indivisible NW steering committee liaison Leona Goldshaw. “We are thrilled that our resistance group grows exponentially at each meeting. With passion and hard work, we know we will defeat Trump’s authoritarian and racist agenda. [For example,] our immigration working group will advocate on behalf of immigrants and refugees, a group particularly scapegoated by the Trump agenda.”

In addition to the working group addressing immigration issues, there are seven others focused on the proposed American Health Care Act(or AHCA), civil rights and hate crime issues, Supreme Court and judicial nominees, “red to blue” state political strategies, the environment, and the free press.

In his address to the AHCA group, Dr. Marc Stier, director of the Pennsylvania Budget and Policy Center, stated “We estimate that 4,000 people will die prematurely with the reduction in Medicaid, and it’s going to cost us 40,000 jobs in this state.”

However, there is not consensus in the GOP around the proposed American Health Care Act (or Trumpcare), creating an opportunity for Democrats to pressure moderate Republicans to vote against it. It is also problematic to the far right and Tea Party members, who want a total repudiation of the ACA.

“[Trumpcare] is a slow-motion repeal. The Republicans may not be able to pass this because they are going to lose votes on the right,” Steir said.

During his presentation to the civil rights and hate crimes working group, attorney Michael Coard gave an overview of some of the pressing matters in the African-American community and of how hate crimes are defined and prosecuted in Pennsylvania. He also spoke about the critical need for intersectionality and cooperation between all concerned activists to defeat the Trump agenda.

“We need to mobilize as a real coalition,” Coard stated. He stressed that although those present might have different priorities when it came to their areas of concern (i.e. women’s issues, civil rights, LGBTQ issues, et. al.), there are areas where consensus can be reached.

“We all can’t agree on everything, but if all we can agree upon is that we hate that guy in the White House, we can start with that…we all have to come together and attack this common enemy. We’re going to win this fight because we’re right, and we’re strong. He is actually doing more to get rid of him than we are doing to get rid of him,” Coard said.

The free press working group spoke about the role of that social media algorithms, clickbait, “fake news” propaganda and confirmation bias played in the 2016 election and how it remains to be a force to be reckoned with now. The group decided that one effective way around which they can mobilize is to support robust investigative reporting by following these journalists on Twitter and sharing their stories on all social media platforms. They also agreed upon the importance of media literacy education.

For information about how to become involved with Indivisible NW group, visit: ww.facebook.com/IndivisiblePhiladelphiaNorthwest/.