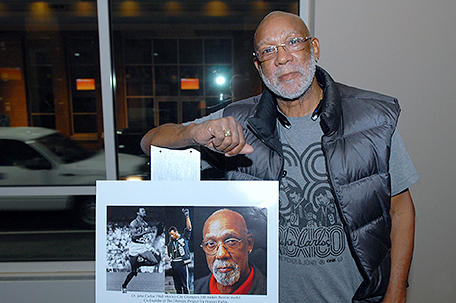 ABOVE PHOTO:  John Carlos speaking to visitors at the podium. (Photo by Bill Z. Foster)

As he sat at a table in the Pennsylvania Convention Center on Saturday during the Black History and Culture showcase, John Carlos was handed a poster of an image of he, fellow American medalist Tommie Smith and Australian medalist Peter Norman. The woman who handed him the photo was probably a small child when the image was taken at the 1968 Olympics in Mexico City.

The photo with Smith and Carlos standing barefoot on the medal stand with their black leather covered fists, tightly-closed and arms raised high in a Black Power stance, is still hanging on the walls of many college dormitories today. 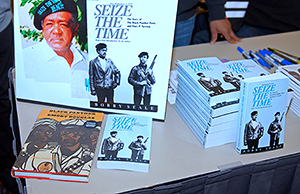 “That’s because while much has changed about the United States, a lot still remains the same,” Carlos said.

“I’m not surprised in the least,” he said.

“It was powerful then and it’s still powerful now.”

Later that day, Carlos, who played for the Philadelphia Eagles in the 1970s, shared his thoughts about that day when he and Smith made the Black Power statement that ended up getting them thrown out of the Olympic village and condemned by a public that felt what they did was disrespectful.

“What helped him get through it was a sense that he was destined to take his stand, Carlos said.

“I believe that God chose us to be a beacon for social justice through the Olympic Project for Human Rights,” continued Carlos.

“Some people thought it was about ‘Black Power.’ But the only Black Power I had was when I was running down the track.”

That kind of historical insight is a hallmark of the ninth annual showcase that also featured Black Panther Founder Bobby Seale speaking at the event.

“Having icons of the Freedom struggle like Carlos and Bobby Seale, one of the founders of the Black Panther Party at this year’s showcase made a lot of sense considering the current climate,” said Everett Staten, founder and organizer of the annual showcase.

“It’s extremely significant and timely to have both of them here,” Staten said.

“John Carlos and Bobby Seale led two of history’s great protests against injustice. They were vilified and made some sacrifices, but it showed what they were made of.”

In addition to hearing from historical figures like Seale and Carlos, attendees of the three-day showcase were treated to poetry from former Philadelphia Poet Laureate Sonia Sanchez, a screening of the documentary on the poet entitled BaDDD Sonia Sanchez, the Tuskegee Airmen, the Buffalo Soldiers and Herb Douglass, the oldest living Black Olympic medalist.

Seale, on tour with his new book “Seize the Time: The Story of the Black Panther Party and Huey P. Newton”, spoke to a packed house.

Because of a combination of the current political climate and the 50th Anniversary of the Black Panther Party, Seale’s presence had extra meaning.

Seale talked about the creation of the party, how it created programs such as the free breakfast program, healthcare services, and why despite what you might have heard about the Black Panthers, they understood what true “Black Power” was all about.

It was about making sure that you could exercise it because you had a seat at the table.

“You won’t get “Black Power” unless you get some power seats,” Seale said.

”You must register to vote, and vote if you want power. You can sit and talk all you want, but it only matters if you’re where the laws get made.”

“In order to acquire that power, organization is needed,” said Seale.

“The Panthers joined forces with like-minded groups, groups that included Whites, to obtain power–something that still works today. For example, it’s important that groups like Black Lives Matter make space for Whites who want to join the protests against police brutality,” continued Seale.

The annual Black History and Culture showcase is a free event that gives the community a chance to interact with Black history and culture through exhibits, performances, living history reenactments, talks and documentaries.

Originally done as a way to attract more Black tourists to the Independence Visitors Center, the showcase moved to the convention center when its patron, Ameenah Young, left to become executive director of the Convention Center.

Seeing exhibits of the Buffalo Soldiers, Negro League baseball players, pioneers like Shirley Chisholm, the first woman to run for President of the United States and Tina Sloane Green, founder of the Black Women In Sport Foundation and an award-winning lacrosse legend, brings to young people the kind of historical context they may not get in school, Staten said.

“I’m a little upset that it took me 12 years to get here,” he said. “I really like this. I see a lot of families and kids here. This allows us to educate them as to who they are.”