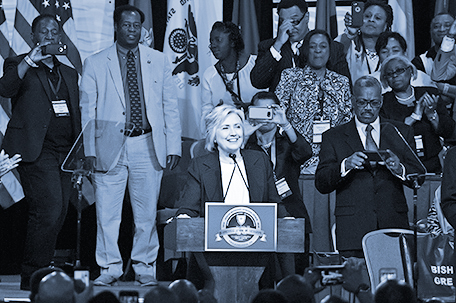 Speaking at the AME’s 200th Anniversary gathering on Friday, Democratic Presidential candidate Hillary Clinton said it’s time for people to start listening to each other.

For many Americans, the past week was yet another round in the fight between those who think the criminal justice system is deeply flawed and those who feel that police officers are being far too scrutinized by the public.

The deaths of Alton Sterling in Baton Rouge, Louisiana; Philandro Castile in St. Paul, Minnesota, and five police officers monitoring a Black Lives Matter protest in Dallas have led to the arguments between Whites and people of color that seem to rear their ugly heads at times like these.

So rather than continuing to talk past each other, it might be time for both sides of the debate to do much more listening, according to Democratic presidential candidate Hillary Clinton.

Speaking to the delegates of the African Methodist Episcopal Church’s 200th anniversary gathering on Friday, Clinton said that in order for things to get better between police and people of color, there needs to be a little more listening on everyone’s part.

“With so little common ground, it can feel impossible to have the conversations we need to have, to begin fixing what’s broken,” Clinton said. “We owe our children better than this.  We owe ourselves better than this. No one has all the answers.  We need to find them together.  Indeed, that is the only way we can find them. Those are the truest things I can offer today. We must do better, together. Let’s begin with something simple but vital: listening to each other.”

Clinton also talked about how important it is for America to finally breach the issue of gun control and do something about it.

The AME Church has come face-to-face to gun violence within it’s own home. Last year, nine congregants at prayer meeting at the Mother Emanuel Church, including the Rev. Clementa Pinckney, were killed when a man walked into the church, participated in the prayer meeting, and then opened fire.

While she realized that talking about gun control so shortly after the police shootings in Dallas might upset some folks, the topic is too important not to discuss now, Clinton said.

“I know that, just by saying all these things together, I may upset some people,” she said. “I’m talking about criminal justice reform the day after a horrific attack on police officers.  I’m talking about courageous, honorable police officers just a few days after officer-involved killings in Louisiana and Minnesota.  I’m bringing up guns in a country where merely talking about comprehensive background checks and getting assault weapons off our streets gets you demonized.”

“But,” she continued, “all these things can be true at once.  We do need police and criminal justice reforms, to save lives and make sure all Americans are treated equally in rights and dignity. We do need to support police departments and stand up for the men and women who put their lives on the line every day to protect us. And we do need to reduce gun violence. We may disagree about how to do all these things, but surely we can all agree with those basic premises.  Surely this week showed us how true they are.”

Due to the police shootings in Dallas, many thought that Clinton might not make the AME Church appearance, especially since she cancelled a planned appearance with Vice President Joe Biden in Scranton.

But she came and talked to the group, which held it’s own elections on Wednesday.