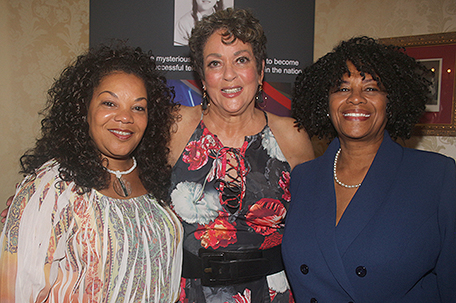 When the name Lisa Thomas-Laury is mentioned in the Delaware Valley, it still evokes pleasant memories of the former Action News anchor, who was affiliated with WPVI-ABC 6 for nearly four decades.

Many loyal viewers and followers still remember Thomas-Laury’s journalistic beginnings in Philadelphia as a budding journalist, who joined the local television ranks in 1978. As a young 24-year-old, who exuded talent, confidence, and professionalism, she made an immediate impact on the Philadelphia viewing audience. Their loyalty was always reflected in the station’s ratings. And it was no surprise to her ardent fans that she would later be called up to anchor Action News at 5 o’clock in 1983. She had spent five years earning her journalist stripes.

And off -camera, viewers shared her life. They watched and celebrated her marriage to Dr. William Laury; they watched as she became a mother of two sons — Langston, now 35 and Leland, 32, and they shared in her rise as one of the top local news anchors in the country. They also were there when she announced that she was plagued by a debilitating disorder, called POEMS Syndrome. Many, with tear-filled eyes, prayed for her and her family.

But with the passage of time, the same dogged determination that catapulted Thomas-Laury to the top of her professionhas helped her emerge from her medical tribulations to begin a new chapter in her life. She has authored a memoir entitled “On Camera and Off: When the News is Good and When it’s Not.” The book deals with her groundbreaking career as a journalist and her struggles dealing with a difficult medical diagnosis.

Last Sunday, many family members, friends and former colleagues attended her book launch party at Evviva Restaurant in Narberth. Thomas-Laury, at age 63, possesses everything a good journalist should be — a good reporter, good writer and a great personality. She still looks very much the part.

Thomas-Laury’s book shares with readers a voyage through her seemingly idyllic life, interrupted by a mysterious ailment, the lengthy search for a diagnosis, and a fierce battle for recovery.  Philadelphia’s Camino Books published the book.

“I want this book to help others navigate through difficult illnesses that may have been misdiagnosed or undiagnosed,” said Thomas-Laury, who was attended by her husband Dr. William Laury and sons Langston and Leland.

In addition to family and friends, there were her former colleagues, fellow ABC 6 anchors — Jim Gardner, Marc Howard and Dave Roberts.

Jim Gardner’s remarks, without a doubt, mirrored the sentiments expressed by many of the attendees.

“It is great to remember an old friend who overcame a past filled with challenges,” said Gardner, who saluted Thomas-Laury as a true champion and wished her much success on the release of her book. 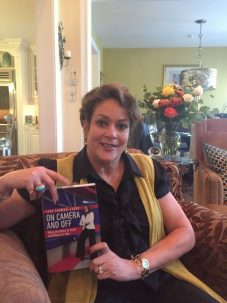 In the early chapters of “On Camera and Off,” Thomas-Laury chronicles her early childhood in the town of Institute, W.Va, a small African American college town, where she and her siblings lived with their father, Thomas Howard, who served in the  United States Air Force and worked at a chemical plant in town and his wife Blossom, a social worker. The Howards were proud parents of four children, Lisa being the oldest. She recalled fond memories and also those that conflicted with the tender backdrop of small town southern living in the 1960s.  The admission, although painful, was “therapeutic”, according to Thomas-Laury, who recounted her father being on a trajectory to become the first Black law librarian at the state’s law library; but problems with alcoholism eclipsed the opportunity.

She would later attend Marshall University in the early 1970s. It was there Thomas-Laury landed a job as a weather girl at the Huntington, VA, NBC affiliate and where her true love of broadcasting germinated.

Following graduation from college, she worked on-air in Oklahoma City. While interviewing for her second reporting job at the ABC station in Nashville, she met Oprah Winfrey, who was reporting and anchoring the weekend news there. The two formed a relationship, which was the nucleus of their friendship today.

While it is difficult to believe that anyone can beat Oprah Winfrey at much on anything, in 1978, Thomas-Laury bested Winfrey for the noon anchor job at 6 ABC in Philadelphia.

The edge she wrote, “I was African-American but didn’t look ‘too Black.’” At the time, she deemed it a big appeal to station management.

During her years on-air in Philadelphia, Thomas-Laury’s relationship with Winfrey gave her entrée to the Harpo Productions franchise and access to both the media mogul, who even taped a video tribute for Thomas-Laury’s retirement party.

In her unpretentious manner, Thomas-Laury shared, “I was able to communicate with Oprah that I understood in a way that was genuine.”

Thomas-Laury assumed the Action News 5 O’clock anchor chair in 1983, after anchor Jim O’Brien was killed in an untimely skydiving accident. She anchored the evening news with Marc Howard for more 19 years, and has the distinction of being the longest-running co-anchor team in the country, by Howard’s admission.

Thomas-Laury’s life was pretty idyllic until 2001, when she began experiencing inexplicable weakness, pain and numbness in her feet and ankles. After seeing a number of doctors and receiving varying diagnoses, Thomas-Laury finally learned that she had POEMS Syndrome, a precancerous condition entrenched in a plasma cell disorder. The condition is expected to shorten the life expectancy of those afflicted with it.

When Thomas-Laury was in the high moments of her debilitating illness in 2004, walking and talking became almost impossible tasks. She also lost her hair, and her energy fell to dizzying levels. To combat the pain, she became addicted to the opioids she was prescribed to manage agonizing pain in her legs, feet and ankles.

She ultimately learned that she was misdiagnosed. After receiving the correct diagnosis, she underwent a bone-marrow transplant and chemotherapy. She successfully arrested her addiction and returned to work in 2007 part-time and had a successful stretch.

Thomas-Laury believed sharing this portion of her journey was important because, in her estimation, so many young people are falling victim to opioid addiction “in epidemic proportions.”

In 2015, Thomas-Laury underwent another bone-marrow transplant. She officially retired the following year, in 2016.

Thomas-Laury was at a crossroad, according to her husband. “She now had a decision, and it ultimately forced her to choose between becoming a defeated victim or to live victoriously. She chose the latter.”

Her health journey battle has been an inspirational one, according to her son Langston, who operates a financial services firm. “Her message is an inspirational one and for anyone engaging in any type of problem. She demonstrates they can overcome it with determination” he said.

From journaling to publishing

Thomas-Laury started journaling while recuperating from her first bone-marrow transplant in 2004. Her first intent was to only share it with her family. However, after her second transplant in 2015, she found herself in discussions with Philadelphia advertising and public relations executive Brian Tierney about possible speaking engagements. At the end of the conversation, Tierney encouraged Thomas-Laury to consider writing a book.

Edward Jutkowitz, publisher of Camino Books in Center City, recounted receiving the opportunity to work on the project.  “Lisa did reach out to me, and I was impressed by her case as a woman so many knew for nearly 40 years, yet they didn’t know there was more to her life that was worth sharing,” he said.

“Tierney believed Lisa, as a professional with an impeccable brand, had a story to tell. She was a respected journalist, and her story about health was an inspiration,” recalled Jutkowitz, who admits being sold immediately on the book, pushed to publish it for the upcoming holiday season.

Thomas-Laury was still hesitant. However, her sons upon hearing about the proposal, began prodding her to write the book.

“Ever since I was a little boy, my mom has been a great storyteller,” said Leland, a public relations executive. “It wasn’t time for her to stop telling stories. She has so much more to share with the world.”

Once committed to the project, Thomas-Laury developed an intensive writing schedule that consumed her literally from midnight to 7:00 am.

The process of committing her story to paper, by Thomas-Laury’s own admission, helped her come to terms with her illness.

But it was the words of her husband Dr. Bill Laury, who aptly summed up her journey from journaling to publishing with one word —“Rebirth.”

“Lisa’s story will reveal the same woman, sharing a different side of her story,” said Laury. “Her journey and ultimate triumph is an example for all of us who face challenges that we can overcome them.”