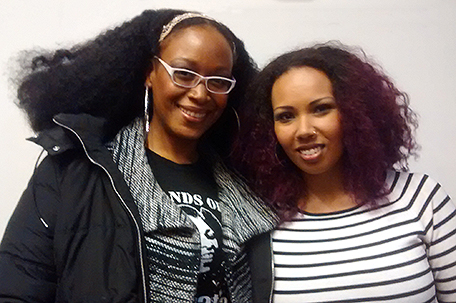 What is sex positive? And no, it’s not about running out and sleeping with as many people as you can.

Sex positive, in its essence is the belief that all sex, that is healthy and expressly consensual, is a good thing. Even if a woman chooses to have sex multiple times a day or even with multiple partners (opposite or same sex), they should be able to do so without judgement from society.

Why is being sex positive important? Sexuality is an important part of who we are as human beings, and yes that includes women too. There is a connection between being sex positive and having an understanding of how gender socialization, sexism and patriarchy have an impact on sexual violence.

Lemieux and Jones, who are proud feminists, pulled no punches during the Feb 26 panel hosted by University of Penn’s Black Graduate and Professional Student Assembly organization.

The ladies dove into a variety of topics including the daily obstacles and intimidation they face daily as a woman.

Everything to men feeling sexually entitled to women based on her appearance, street harassment were topics on deck.

Lemieux recalled having to have cab fare just to get a ride a few blocks to her house because men in her neighborhood would harass her.

Jones discussed having to make sure she critiques her attire before picking up her son because of the sexist attitudes and the assumptions people may make if she looks sexy or is not covered up enough for their standards.

Both ladies said they know what it feels like for some women, who on some days do not leave their homes because they are tired of trying to protect themselves.

“That’s what oppression is. It keeps you in the house,” said Jones.

“The mental cost of what I’m going to wear today so I am not attacked,” she continued.

Lemieux and Jones believe that women embracing their sexuality and identity is part of their freedom and liberation.

They also chopped it up on the reasons society fears women who live freely.

In their words—People are afraid of people who are free because they don’t have the courage or safety to be free.

“Freedom is not just a destination, it’s a journey,” said Lemieux.

And, unfortunately many are offended by women who want to live free.

Popular film clips, highlighting the double standard and unfair criticism women are subjected to were shown throughout the discussion including the video that went viral of a Christian woman critiquing actress Meagan Goode at a public event for “showing too much.” Goode’s husband, Minister DeVon Franklin vigorously defended his wife.

“When I married her, I said, ‘I accept you for who you are. And whatever you choose to wear, that is your right.’”

That brought another topic into the discussion: judgmental women who shame other women stemming from their fear of what it means when society begins to approve those choices that they may resist personally.

Lemieux noted after seeing the clip that she would have liked to see what the woman who criticized Megan Good looked like and get a sense of her personality to see if that may have played a part in why she feels that the married actress should cover up.

During another clip showed during the panel Philly native and model Amber Rose admitted during a recent national talk show appearance that she used to be one of those persons who shamed other women. The two male hosts of the show stated that a woman’s attire can send messages that she wants to have sex.  Rose, now an outspoken advocate against “slut shaming,” shut both hosts down noting that women dressing sexy often times has nothing to do with wanting to sleep with the opposite sex. She also noted that a woman has the right to change her mind about intimacy if the man has a condom.

Jamilah Lemieux reminded the audience that abstinence has equal value in the sex positive movement.

Feminista Jones agreed encouraging the members to “find out what your identity is and surround yourself with people who support you.”

Charlie Sheen says he is HIV-positive; has been blackmailed