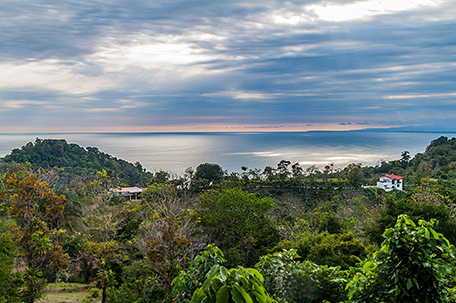 Three years ago, at the very top of my to do list, I wrote down “Ziplining in Costa Rica”. My brother, Alloyius McIlwaine, a Philadelphia mural artist, was asked to participate in a collaborative mural project for a non-profit called Asociacion CREAR’S girl empowerment club in Sámara Guanacaste, Costa Rica. On Saturday, January 7th, I embarked on the trip of a lifetime with my brother and cousin to Costa Rica.

We arrived at Newark’s EWR airport late Saturday night. After standing for what seemed like an eternity to check our bags, we were met by a two-hour wait in the line for TSA, three flight delays, and three terminal changes. We finally took off at 3:45 AM. We arrived in San Jose, Costa Rica to 70 degree temperatures and light rain. I decided to rent a car to aid in the exploration of Costa Rica. After arriving at Alamo, I also arrived at my first lesson.

Lesson #1 Renting a car in Costa Rica is very different from renting state side. My quoted price of a little over $100 jumped to $500. Why? They charge you twice for insurance, and there’s no way around it. There is also a 13 percent tax applied to just about everything. After sulking for a bit, I was faced with my second lesson.

Lesson # 2 Costa Rica doesn’t use addresses.  I paid for a GPS system in our rental car, but getting around was still very tricky. Although I was planning for an adventure, I was hoping to not get lost–but we did… often! Their GPS works on a system of landmarks. Type in the name of the landmark you wish to go to, and pray that it shows up.

Lesson #3 Traffic laws really don’t apply in Costa Rica. The four-hour trip from San Jose to Sámara was filled with rocky dirt roads, winding curves, and fast driving. The locals passed on the left, they passed when there was one lane and on coming traffic, and they passed when there were cliffs on one side and mountains on the other.

We arrived at our rental house in the middle of Sunday afternoon to 87 degree weather… it was perfect. The housing manager stayed on the phone with us to give directions to Casa Margarita. Without his assistance, the secluded house with no address would have been nearly impossible to find. The house was beautiful and the view was breathtaking. 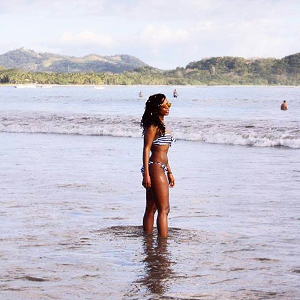 We were surrounded by wildlife and everyday we were greeted with visitors; geckos, frogs, huge spiders, etc. The scariest of our house guests was the scorpion I found in my bed… thankfully my brother was there to rescue us.

We visited seven locations on our trip. The three beaches we visited; Playa Sámara, Playa Carrillo, and Playa Barrigona offered some of the most gorgeous views I’ve ever seen.

We also ventured to a coffee plantation in Hojancha to learn more about the Costa Rican staple.

One of the highlights of the trip was ziplining. We ziplined at the family owned and operated Wing Nuts Canopy Tour. The tour included ten lines, lunch in a tree top overlooking the Pacific Ocean, and we made friends with a local coati.

Our final destination was a trip to the rainforest at the Braulio Carrillo National Park.  We planned to do a tour at Rainforest Adventure. Their site listed three tour times. We arrived about 45 minutes before the tour was suppose to commence but they refused to give us a tour, siting that there was no one available. Despite that disappointment, we were able to see the rainforest, and I stood on a cliff for an incredible view. We spent our last night in Costa Rica in Santa Ana over a quiet dinner.

This trip was one of the most fulfilling experiences of my life. Experiencing the culture, the surroundings and the kindness of the people was truly a blessing. The city of Sámara and the country of Costa Rica showed extreme gratitude to my brother and the other artists for contributing their creativity. I hold extreme gratitude in my heart for the experience Costa Rica shared with us.