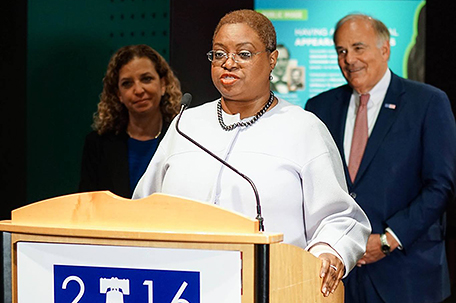 “In 100 days, the eyes of the world will turn toward Philadelphia and Democrats will nominate the next President and Vice President of the United States of America here in the City of Brotherly Love and Sisterly Affection,” said DNCC CEO, Rev. Leah D. Daughtry. “When the world tunes into the Democratic National Convention they will see a Convention centered on the vision and ideas our Party offers to the American people. There is no better backdrop than the birthplace of Democracy to showcase Democratic values.”

“It’s hard to believe that we are just 100 days away from kicking off an amazing Democratic Convention here in Philadelphia, but it’s clearer than ever that the next President of the United States will be nominated on our stage. We’ve already seen so much to be proud of from our candidates, and we’ll see it again here in July. Our convention will tell the story of just how far we’ve come. We’ve gone from seeing millions of families lose their jobs, homes, and even their savings under the previous Republican administration, to 73 straight months of private-sector job growth and over 14 million new jobs created, thanks to President Obama’s and Democratic economic policies. We’ve come so far, and here in Philadelphia we’ll introduce our nominee and their vision to build on the progress we’ve made,” said DNC Chairwoman, Rep. Debbie Wasserman Schultz.

“Philadelphia is the city that gave rise to our country, and it is intrinsically tied to the American Dream. It’s fitting that our Democratic nominee will launch their campaign here, ready to fight on behalf of the American people to expand opportunities, raise wages, ensure equal pay, end discrimination, expand voting rights, and ensure that everyone willing to work hard has a fair shot. Our road to victory in November begins here in Philadelphia.”

“Philadelphia is ready and excited to host the Democratic National Convention. Our history as the birthplace of Democracy and our current efforts to bring opportunity and equity to every zip code make this city the perfect place to nominate the next President of the United States,” said Philadelphia Mayor Jim Kenney.

“Since Philadelphia won the bid to host the Convention, our Host Committee has been following through on its commitment to making this the most fun, inclusive and successful convention yet,” said former Pennsylvania Governor and Host Committee Chair Ed Rendell.

“Between building a robust vendor directory, recruiting volunteers, planning exciting activities around town, and engaging local and diverse businesses, the Philadelphia community’s response to our efforts has been overwhelmingly positive. We look forward to welcoming the Democrats to our city 100 days from today, and are excited to host the party.”

About the Democratic National Convention