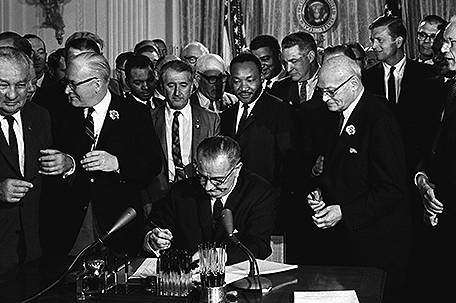 On Thursday, January 16, 2014, Members of the U.S. Senate, led by Sen.Patrick Leahy (VT) and the U.S. House of Representatives, led by Cong. James Sensenbrenner (WI) introduced bipartisan legislation, S. 1945 / H.R. 3899, the Voting Rights Amendment Act of 2014.  The purpose of these bills is to update and modernize the provisions of the 1965 Voting Rights Act (VRA) which were struck down by the U.S. Supreme Court in the Shelby County, Alabama v. Holder case decided on June 25, 2013.

Shelby challenged the constitutionality of the “preclearance” provisions of the VRA, under which certain jurisdictions which have an established history of state- or jurisdiction-administered disenfranchisement based on race need to obtain advance approval or “preclearance” from the US Department of Justice or the US District Court in D.C. before they can make any changes to voting practices and / or procedures.

Examples of these changes include “redistricting”, or the re-drawing of congressional district boundaries which happens every 10 years as the result of the census; or a change in the date, time, place, or manner under which an election is held.  Federal approval would be given as soon as the state or jurisdiction proved that the proposed change would not abridge the right to vote on account of race or color. The Shelby decision held that Section 4 of the VRA, which sets out the formula that is used to determine which state and local jurisdictions must comply with the preapproval requirement, is unconstitutional and can no longer be used.

Thus, although the concept of “pre-clearance” survived Constitutional scrutiny, it will have no actual effect unless and until a new statute to determine who should be covered by it.

The legislation which was just introduced creates a new formula for determining which states must obtain pre-approval before making any changes to their election laws, and while the NAACP deeply appreciates all of the work that went into crafting this bi-partisan legislation, we will now work to amend it through the legislative process so that more states and jurisdictions with a troubling history of administering voter disenfranchising practices must have proposed changes to election laws and practices pre-cleared before making changes.

Sadly, we are all-too aware that discrimination continues to plague our electoral process throughout the country, and the bar that is set by this legislation is too high, and too few jurisdictions will be covered if it is enacted in its current form.

From the exceptions for voter ID laws which are contained in the bill to decreased preclearance coverage to increased reliance on costly litigation, there are essential revisions and amendments to this bill that must take place to ensure ALL voters have fair and equitable access to the ballot box.  While we know that compromise will be needed to pass this bill, we cannot sacrifice our core principle: participation in our democracy should be unfettered and all votes should be properly counted.

GOP again has its sights on the Voting Rights Act