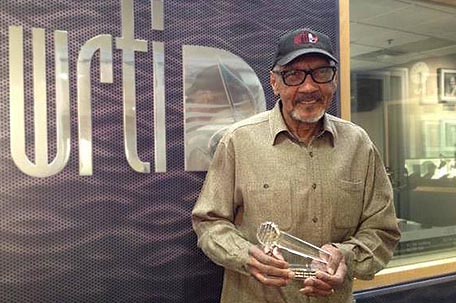 ABOVE PHOTO: The Legendary “BP with the GM”   (Photo courtesy of WRTI-FM)

After 58 years of working in broadcast radio, Philadelphia’s Bob Perkins will lay down his microphone by the end of this month. June is observed nationally as Black Music Month, and so it seems fitting that someone who has worked in radio for almost six decades — the last 20+ years playing jazz music — would close out their career in June.

“Radio was saturated into me like a sponge that’s put in water,” Perkins said. “I guess I couldn’t help but love radio, because from the time I was a little boy, radio was very much a part of my day — every day — growing up in South Philadelphia.”

Looking back over his broadcast career, Perkins said he had dual passions –one for anchoring the news, the other for playing jazz greats on the radio.

“Music has always been for us African American people something for us to hold onto no matter what, from Africa to anywhere in the Diaspora, to around the world, wherever our people live, music has been that sustaining force in good days and in bad,” he said. “Music has brought us through some very challenging times.”

Perkins credits his father for being the one who gave him the love for radio.

“I never knew exactly how my father came to love radio so much, but he was an avid radio listener,” Perkins recalled. “Radio started I think, in 1920 in Pittsburgh, Pennsylvania. My father must have been listening to radio from the very start. I’ve been told way before I was born, people would come to our house back when my father had the first crystal radio set on the block. You had to wear earphones to hear whatever stations you were lucky enough to hear that would come through. This was in the mid-1920s.”

“My father was kind of a genius in handling his radio,” Perkins continued. “My mom would let me stay up on the weekends and sometimes we would pick up stations in other states. We listened sometimes to WGN in Chicago — that was like 650 miles away. We would listen to WAR in Detroit, which is 500 miles away. He had his own antennae that he had drilled into his table model radio. He could pick up stations that no one else that I knew could get. We would listen to the great John Facenda out of Philadelphia and to other great broadcasters from other cities. Radio was drilled in my head.”

His father’s illness is what really led to radio becoming an important part of the Perkins household. Perkins recalled that his father, at the age of about 40, had such severe arthritis that he could barely walk.

“His salvation was radio,” Perkins said. “My father just loved to have the radio on. We would listen to radio from sun-up, through the night, and into the next morning.”

“I lived on the same block as the famous Heath Brothers in South Philadelphia growing up,” he said. “They were a great family of jazz artists. I think because of them, that’s where my love of jazz music was solidified.”

It took Perkins a little while to break into radio. He was the youngest child and when his mother became ill, he felt responsible to stay and care for her.

“I couldn’t leave Mom Perkins to go chasing after radio,” he said. “But the idea stayed in the back of my mind.”

“To work in radio, I was told I’d have to go work in the boonies (the boondocks) and get the mistakes out,” Perkins continued. “If I was lucky enough to get a radio gig in the boonies without any experience, I’d be lucky, I was told. It was always in the back of my mind, like a latent dream, that maybe one day, I’d get into radio.”

Eventually, Perkins moved to Detroit at the suggestion of his older brothers who already lived there, having moved from Philly after World War II, he said.

“They were doing quite well, raising their families,” Perkins said. “Detroit was wide open. I had been selling insurance in North Philadelphia at the time, knocking on doors. I had also served in the United States Army from 1956 to 1958. Once Mom made transition, I decided to go for it, and so I packed my bags, and I was off to Detroit. I got a job working at a Black-owned insurance company, Great Lakes Mutual, in Detroit. I had an insurance license and they told me, ‘You’re going to start in a week.’ I walked out the door and I was very happy. I [then] looked up and I saw a sign that read WGPR-FM. I wondered to myself, ‘could I get hired for two jobs in one day?’

“The general manager called me a couple days later and offered me the job,” he said. “I went downstairs at the same building, and told the insurance company, ‘I’m here to quit a job I never started.’  Leaving out the door of the insurance company, the man who had offered me a job selling insurance said, ‘Do you know what they’re going to pay you up there? You can make 20 times as much working down here.’ But I told him, ‘I want the job in radio.’ That was my start in radio back in November of 1964.”

Perkins stayed at that first station about a year and a half when another opportunity showed itself. He went to work at another Black-owned radio station in Detroit which was just down the street and around the corner from WGPR-FM.

“Some of the management of that station listened to me on WGPR and they liked what they heard,” he said. “They offered me a job and I accepted. I stayed there for about a year and a half, but I was hungry to do news in radio, so I needed to move on.  I looked around, and I found a station that wanted a newsman. I went in and knocked on the door and they said, ‘we listened to you on WJLB, and we liked your work there, but you don’t know news. We’ll put you in there with the news guy and you’ll learn.”

“The management team at WDAS liked my work very much, and one day they asked me the question, “Do you want to come home and work in Philadelphia radio? I said yes,” he said. In September of 1969, I started working at WDAS as a newsman. They were very kind at WDAS, and they also allowed me to moonlight at WHYY-FM. I did a good music program over there for twenty years. Every Saturday, I was there.”

“At the same time, I started writing for the “Philadelphia New Observer” newspaper owned by Hugo Warren. I wrote for Hugo Warren for 20 years. I had WDAS and WHYY, doing all of those things simultaneously for about 10 years. I became the news and editorial director after Jim Clash died at WDAS,” Perkins said. “I remember saying, ‘I don’t know how to write editorials.’ LeBaron Taylor said [to me], ‘You take the job and if you mess up, we’ll get somebody else.’ I did that for 13 years pretty good.

“In 1988, big changes came to WDAS, and I was amongst the first of the old group of employees to be let go,” he continued. “Believe it or not, I next ended up at Power 99. I always felt like they hired me because they wanted to get back at WDAS. I stayed over there about two years, but it really wasn’t a good fit.  They had hired me for all the wrong reasons in the first place. That petered out, but I was still at WHYY playing jazz music and loving it.  I next made a move over to WRTI, which is Temple University’s radio station, as a volunteer DJ playing jazz music. Eventually, they changed their format to Jazz and Classical music. I got on the payroll, and I’ve been there, ever since. That was 25 years ago.”

At the end of this Black Music Month, Bob Perkins will be retiring at the ripe young age of 88. And what’s he talking about doing after that?

“I’ve gotta find something else to do,” he said.  “I’ve met a lot of good people, a lot of entertainers, musicians, and politicians along the way. I know I’ve been very blessed. I think I have some wisdom to impart.”

Perkins spoke about the evolution of radio.

“Radio has changed dramatically over the years, [particularly] with all the new technology,” he said. “It seems like our attention spans are so divided in this new age of technology. It’s almost like we’re trying to do too much. Electronics and technology are magnificent. You can touch a button and get any answer to any question that you have. But on the other side of the coin, technology can be very dangerous.”

“I also don’t think radio announcers are as influential today as they used to be,” Perkins added.

“Remember, I came up as a war baby. News was almost like a religion back in the day. You trusted the newsperson you were listening to. We had great announcers back then. The world wasn’t moving quite as fast. Everything is so fast nowadays. I guess along with fast food came fast everything — fast cars, fast thoughts, fast relationships. The world is a lot different than it used to be.”

A stroke survivor from three years ago, Perkins is still kicking and he’s still ticking, playing some of the best jazz music you ever want to hear on WRTI-FM. His show will come to an end June 30, but he says this won’t be the last his fans hear from him.

Until then, Mondays through Thursdays from 6 to 9 p.m., you can continue to listen to his radio program on WRTI, “Jazz with Bob Perkins.”

A Historical Approach to the Positive Music: Jazz in Philadelphia