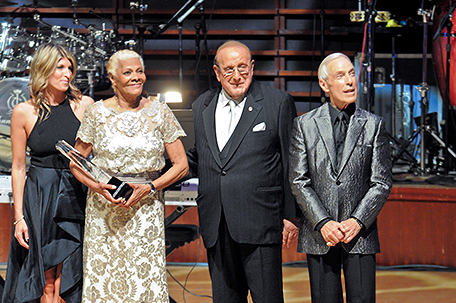 The music world is in a constant state of motion.

Someone will always seek to discover new talent, and the concept of who’s “on top” is forever changing.

But despite those changes, ebbs, and flows, some artists and their body of work remain fixtures in the music industry. Dionne Warwick is one such artist. In a category entirely her own, Warwick remains among the pioneers of R&B, pop, and soul music.

In a star-studded gala hosted by her longtime friend and local radio legend Jerry Blavat, Warwick was honored for her longevity as an artist and her philanthropy for people with HIV/AIDS and world hunger among other things, with the 2017 Marian Anderson Award.

The Marian Anderson Award Gala Concert at the Kimmel Center was a dynamic night of entertainment. Led by world-renowned, three-time Emmy Award-winning pianistand music director Bill Jolly, the audience was treated to an orchestral performance of epic proportions. In line with Anderson’s mission to give back to the youth, the evening began with a performance by The Young Artist Study-Grant Quintet. The quintet was comprised of members Michelle Cann on piano, Maxwell Chambers on violin, Peirce Ellis on viola, Branden Ellis on double bass, and Eliana Yang on the cello. 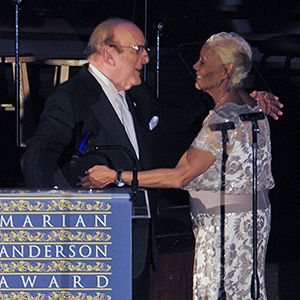 The Marian Anderson Award —  named for the legendary soprano from South Philadelphia, whose concert on the Mall on Washington was one of the first salvos thrown in the Civil Rights Movement– is given to an artist of long standing that marries his or her artistry with philanthropy, something that describes Warwick to a tee.

Warwick’s career began in 1961 after being discovered by the phenomenal song-writing duo Burt Bacharach and Hal David. She has won five Grammys, has 60 chart-topping hits, and has sold over 100 million albums worldwide. She has also dedicated her career to tackling issues such as world hunger, disaster relief, and HIV/AIDS.

Following the Young Artists quintet, soprano Alyson Cambridge was next to perform. Accompanied by pianist Djordje Nesic, Cambridge performed “Summertime” from “Porgy and Bess,” before joining the orchestra for a rendition of “I Say a Little Prayer.”

Russell Thompkins, Jr. and the New Stylistics performed a number of their hits including “You Make Me Feel Brand New,” before singing their cover version of Warwick’s Billboard charted “You’ll Never Get to Heaven (If You Break My Heart). 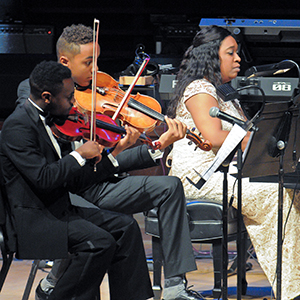 Marilyn McCoo and Billy Davis, Jr.—formally of popular 1960s group The 5th Dimension—sang a medley of their hits “Aquarius/Let the Sunshine In” followed by a duet of “I Know I’ll Never Love This Way Again.”

The evening’s concert ended with an incredible performance by Darlene Love. Love moved the audience to tears sharing sentimental stories of singing background for Warwick for 10 years. She also candidly recalled a touching moment where she credited Warwick with getting her back on her feet. Love performed her hot song “He’s a Rebel” before honoring Ms. Warwick with her rendition of the classic “Don’t Make Me Over”.

Legendary music mogul Clive Davis presented the award to Warwick. A longtime friend and colleague of Warwick’s, Davis paid homage to her by highlighting her numerous accomplishments and contributions to music.

“She has a voice that floats like no other, she caresses lyrics like no other, and she does it with natural soul and unmistakable identity.” Davis remarked, “You hear her voice and you instantly know who is singing her legacy of hits… it’s just truly amazing! We’ve seen with Burt Bacharach and Hal David as her muse… she’s created classics. There are hits and there are classics… she’s created numerous classics that will live forever.”

Then Warwick took the stage with the refreshing elegance, humor, and wit that she is known for. With sincerity, Warwick shared her thoughts on receiving the Award. 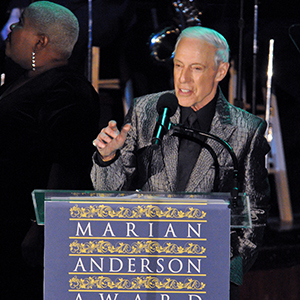 “Let me just say this event has been more than I could have ever anticipated.’ Warwick began. “Overwhelmed yes… I am truly overwhelmed. To be thought of in the same breath as Marian Anderson, that is enough to be overwhelmed by. What she has been for me is not only an entertainer or Black woman, but someone who cared enough to care.”

“To say that this award means an awful lot to me is an understatement,” Warwick added. “I received a lot of honors over this lifetime, I must say. The first was when they renamed my grammar school that I attended in my name. I never dreamed that anything would surpass that, but guess what… y’all did it tonight!”

The parallels between Dionne Warwick and Marian Anderson are undeniable. Both legends became iconic barrier breakers that have paved the way for those that came after them. Singers and songwriters alikewish they could have a fraction of the hits and impact that Dionne Warwick has had over the past five decades. Luckily, we will always have the music she has so generously gifted the world.