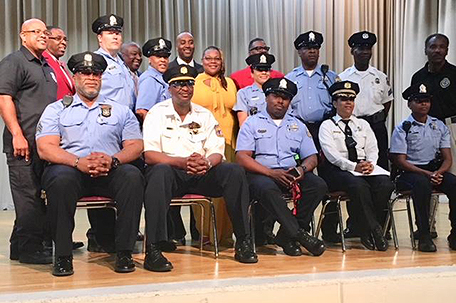 The National Organization of Black Law Enforcement Executives (NOBLE) and the men of Kappa Alpha Psi brought a national program designed to help students understand the legal landscape to a local high school.

The “Learn 2 Live” is a national initiative from the National Organization of Black Law Enforcement Executives (NOBLE) and Kappa Alpha Psi fraternity.

The program provides grassroots training that address encounters between citizens and law enforcement through structured workshops that provide productive discussion and training forums to understand, enlighten, and cultivate positive thinking and appropriate action. Its mission is to provide increased awareness on law enforcement and community policing, statistical perspective of persons of color and the legal system, factual understanding of legal rights, practical strategies and tools when dealing with police.

While the program began with skits and discussions about what to do when stopped by a police officer, the question and answer session showed that the students were concerned about driving laws. Ultimately, about half of the questions revolved around who needs a driver’s license, the difference between a learner’s permit and a driver’s license, why some vehicles are confiscated from unlicensed drivers, and whether some driving laws were recently implemented. 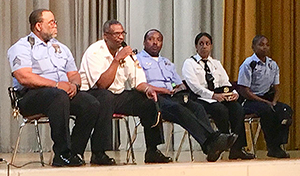 A Germantown senior, who asked that his name be withheld, was a bit embarrassed that he and others did not understand that having a driver’s license was mandatory to getting behind the wheel. Nor did he know that police officers could confiscate the vehicles of unlicensed drivers even if they’re registered.

“I learned today that you cannot always listen to what everyone your age says,” he said. “I really thought that if you had ID and the car was registered, you did not have to have a license. I did not know that if you had a permit you had to have a licensed driver in the car. I got embarrassed when students were asking questions about this over and over like the police officers did not know what they were talking about.”

Yet this King student is not alone in not knowing or understanding driving laws. There is a national increase in unlicensed drivers between the ages of 16 and 44, according to a 2016 study done by the University of Michigan Transportation Research Institute.

There has been a 43 percent decrease in the number of driver’s licenses issued to this age range,  yet they still make up a significant percentage of the drivers on the road, the study cited.

Pennsylvania has one of the highest number of accidents with an unlicensed or suspended license driver behind the wheel. This has resulted in the new “Drive Safe PA” initiative targeting younger drivers and the Pennsylvania Aggressive Driving Enforcement and Education Project launched late last year.

Craig Chisholm of NOBLE said that the intent of the panel discussion, staged scenes, and question and answer session was to help students be aware of how to interact with law enforcement and understand laws that impact their age group. He said that when one is questioned by the police, it is not the time for confrontation. “That is why we stress to comply first and file any grievances later,” Chisholm said.

Local Kappa Alpha Psi president Darryl Stephens said that he thought it was important to have the May 23 session because it could possibly save the life of one of the students. He said he hoped the students walked away with “a better understanding of the police” and how to handle various situations interacting with law enforcement, including while a driver or a passenger in a car.

“I thought it was educational and informative,” said Destiny Johnson of West Oak Lane, who is a junior. “I feel I knew some of it, but there were things I learned today that I did not know. I didn’t know how to react and that the way I react could impact the way the police reacts. I learned the things you could do that would put you in danger. I think the scenes that were (recreated) helped.”

Kappas to feed 1,000 families during the Thanksgiving holiday