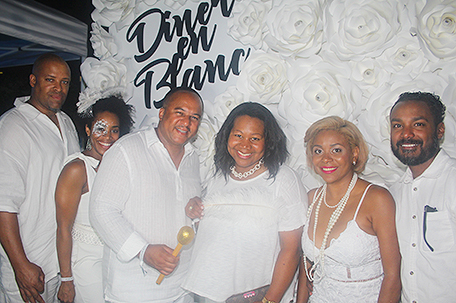 ABOVE PHOTO: By Robert Mendelsohn

From a global phenomenon to highly sought-after “secret,” Le Dîner en Blanc returned in high style to Philadelphia at Franklin Square, Thursday, August 17, 2017 for an unforgettable evening filled with food, wine, fashion, culture and music. The event expanded to 5,300 guests for its sixth edition – making it the largest ever held in the United States.

Dressed in white from head to toe, attendees celebrated and re-purposed the public space that was revealed only moments before the event began. Past locations in Philadelphia have included Logan Circle (2012), JFK Bridge (2013), Avenue of the Arts (2014), The Navy Yard (2015) and outside the Philadelphia Museum of Art (2016).

“We are thrilled to return this summer with the 6th edition of Le Dîner en Blanc -Philadelphia,” said co-host Natanya DiBona. “Last year’s 5th anniversary event on the Parkway gave us the opportunity to really celebrate the strong connection to Paris that both our city and our event share. This year’s event provides us with a different backdrop and another unique and interesting way to show off Philadelphia while having a fabulous party.”

Part mystery tour, part pop-up feast and part je ne sais quoi, Le Dîner en Blanc is a magical evening that celebrates and re-purposes public space. Bystanders will witness groups of guests all dressed in white gathering at specific rallying points all across the city. Guided by volunteers, these groups converge on a unique and unexpected setting, travelling by chartered bus or public transportation. Guests will bring their own gourmet feast, table, chairs and table setting. Over the course of the evening, they will eat and celebrate amid music, entertainment and dancing.

The evening is filled with visually breathtaking moments including the waving of a cloth napkin to mark the beginning of the dinner and the lighting of sparklers to let guests know they are now free to mingle and dance. When at the end of the evening the trumpet sounds, guests pack up all of their belongings, pick up all their litter and head back into the night, leaving behind no sign of their elegant revelry. 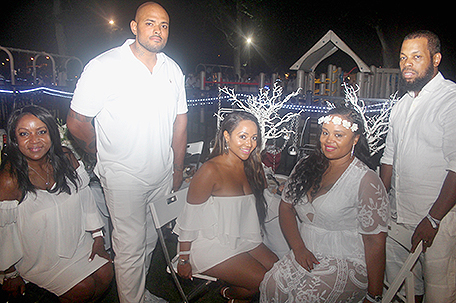 SUN: Why this location?

“After last year’s Diner en Blanc at the Philadelphia Museum of Art, the bar was set very high” said Natanya DiBona. “We didn’t want to compete with the views and aerial perspective, and instead wanted to create a very different and unique interactive experience that had lots of things for guests to do. We also love the back story that this was one of Philadelphia’s five original squares. We love what Historic Philadelphia has done to revitalize the square in the last decade and we wanted to spotlight it as one of our favorite public spaces. We are hoping that for guests that haven’t been to Franklin Square that this will encourage them to fall in love with it like we have and return many, many times.”

SUN: How was the location selected?

Historic Philadelphia approached the co-hosts with the idea. At the time, the co-hosts were considering two other locations,”DiBona said. “For 2017, we were considering three locations and Franklin Square won our hearts. We are thrilled that Historic Philadelphia reached out and has been such an active partner in the process this year. The final night at Franklin Square was all we hoped for – and guest feedback has been positive. We are reading on social media that this has been the top favorite for dozens – if not hundreds – of guests.” 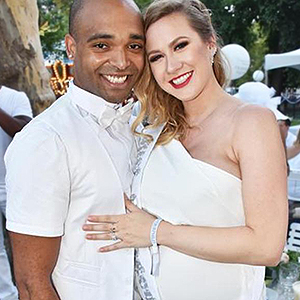 The challenge was the layout and fitting everyone into the space and ensuring we would fit, plus working in all the activations we had planned,” DiBona said. “Thank you to the city of Philadelphia and Historic Philadelphia for their assistance in working to place tables on the perimeter of the square sidewalk and on 7th Street.”

SUN: Was there a theme?

“ The theme this year was based around celebrating your inner child in this urban playtime oasis – it was the perfect way to celebrate public space, dinner as an art form but also give guests a chance to escape for the night from everyday life,” DiBona said. “We also love to celebrate the historic aspects of our city – and the location is reminiscent of Logan Circle where we popped up for the first time in 2012. We also played off of the vintage carnival aspects of the space.”

A highlight of the evening were wedding proposals. As of this morning, DEB knows of two proposals – one that started that night, and one later in the evening at the carousel.

Other highlights of the evening included Carousel Horse Racing to support Franklin Square.

They held four horse races on the carousel – each winner received their name on a brick to be placed in the Square outside the Fountain to show support for Historic Philadelphia’s work. Organizers paid the cost of the fundraising bricks to support Franklin Square.

Entertainment for the event included:

Visit Philadelphia partnered for the first time – providing social support and engagement to their million followers from a departure location to the main event, and they sponsored our surprise With Love snapchat filter revealed at the event.

SquareBurger by Cooperage created a special all-white sweets station available for consumption and purchase by guests including their famous cake shakes! 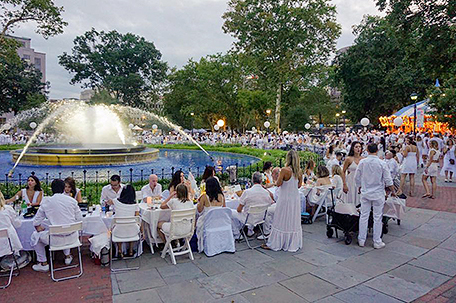 Guests came from all around for the sixth annual Le Dîner en Blanc experience; and were not disappointed! (Photo courtesy of Diner en Blanc)

“Each year we donate event tickets to various organizations which they auction at their own benefits and galas throughout the year,” said DiBona. “Through our agreement with Diner en Blanc International, we are not allowed to officially partner the entire event with a charity, so this method allows us to reach a variety of organizations ranging from the American Red Cross and Alex’s Lemonade Stand.  We also conduct special auctions that relate to the space or the event in particular, for instance recently auctioning a painting that was done by a PAFA student, Nicole Parker, at last year’s event at the Philadelphia Museum of Art. The proceeds raised went directly to PAFA.”

For full details on the event’s rules and regulations, please visit the official website: http://philadelphia.dinerenblanc.com/.