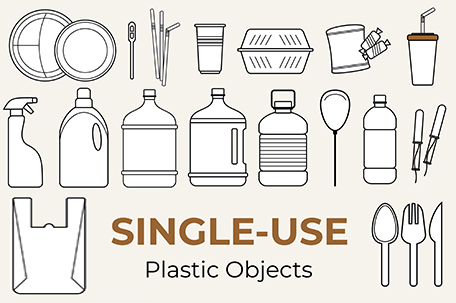 “We can no longer ignore the growing waste problem that is threatening our environment. My colleagues and I have introduced a package of bills that, together, address this problem from a number of angles,” said Rep. Tim Briggs, D-Montgomery. “By encouraging the use of more naturally biodegradable materials, addressing issues with the way we recycle, and finding ways to support environmentally friendly practices, we can help preserve our planet for future generations.”

“Every day, unwitting Pennsylvanians are barraged with products that we’re expected to purchase and use, and then throw away. Only, there is no ‘away,’” said PennEnvironment Executive Director David Masur. “Instead, it ends up in landfills where it can cause water pollution, in incinerators that cause air pollution, or blowing around in our neighborhoods in the form of litter. Nothing we use for a few minutes should pollute our environment, neighborhoods, rivers and oceans for centuries to come.”

The measures that would be addressed in the package include:

• Dissuading litterers and illegal dumpers by increasing the fines and penalties for those caught illegally throwing away their garbage. (Rep. Donna Bullock)

• Increasing the disposal fee for municipal waste landfills from $4 per ton to $8 per ton to help support important conservation and environmental protection programs. (Rep. Elizabeth Fiedler)

• Increasing the recycling fee that landfill operators pay from $2 per ton to $5 per ton on waste received at their landfills, the first increase in 30 years. (Rep. Mary Isaacson)

• Establishing a statewide cigarette filter upcycling initiative, where a 20-cent, partially reimbursed deposit on each pack of cigarettes sold in Pennsylvania would be used for collection centers and safe reuse. (Rep. Chris Rabb)

• Ensuring that producers of plastic packaging take responsibility for the decisions they make by requiring that they cannot sell or distribute plastic packaging in Pennsylvania unless they are part of a recycling program to take it back. (Rep. Melissa Shusterman)

• Providing for a fee of two cents on each non-reusable plastic bag used by purchasers of consumer goods at retail establishments grossing over $1 million annually to support recycling. (Rep. Brian Sims and Rep. Jared Solomon)

In the coming months, the lawmakers will be building co-sponsorship support for these measures and holding local events in their districts related to the package.