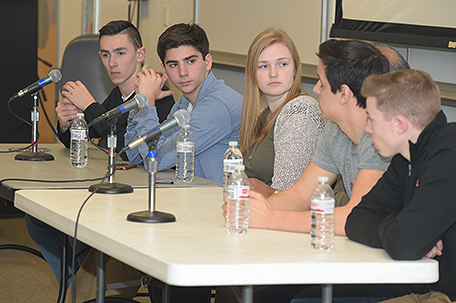 ABOVE PHOTO:  High School student panel during the “Savage Inequities: A Tale of Two Schools.”session on Law & Society Week at CCP.

Last Monday, Community College of Philadelphia delved into an issue that affects many Philadelphia youth today, as well as generations of relatives who came before them.

Maida said the project was an effort to build bridges that transcend suburbs and cities, and various economic groups. He said he wondered whether his students, who are from mostly white and wealthy backgrounds, understood the educational privilege at Methacton High School.

Methacton School District has an annual budget of about $100 million dollars with an estimated $20,000 spent per student according to Maida. The district’s average class size is 22; while 98 percent of its students graduate from high school, with the majority attending four-year universities.

By contrast, the Philadelphia School District struggles with about 600 oversized classes, teacher vacancies, and has about 6,000 students without permanent teachers, according to news reports Maida shared. With a predominantly African- American and Hispanic population, the district spends around $12,000 per child. At Kensington academy, Williams pointed out that the average class size is 33 students.

Though sometimes frustrated, Williams said he is encouraged by the dialogue sparked through the project. When his students went to Methacton High School, “it was eye-opening”, he said. “It’s important that we provide these opportunities.”

Maida added that the project brought together students who may have never met, and exposed them to one another’s realities. His hope is that his students absorbed the message that every child deserves quality education. “The experience incentivizes me to do more,” Falcone said. “We’re the same; we just live different experiences, but we should be equal.”

Kensington Academy  students have been discussing their school exchange experiences and preparing to draft letters to local and state legislators, and begin a round of conversations with them. Williams ultimately hopes to read two letters written by his students to the Pennsylvania House and Senate. It is important that they see the situation through a student’s eyes, Williams stressed. We need to humanize one other,” he said.

Bridget Miller, a senior at Methacton High School, said she drew a lifelong lesson from the project. “I learned that I can’t draw conclusions about people without knowing their back stories,” she said.

Law & Society Week spotlights emerging legal issues and trends in Philadelphia, while providing practical advice from respected experts. More than two dozen workshops, lectures, panel discussions, and demonstrations during the week are free and open to the public and attorneys.

The week’s activities kicked up on Saturday, Feb. 25th, with Community Law Day, a series of free workshops and clinics covering a wide range of topics such as Child Custody, Know Your Rights, and expungement. More than 115 people were served.

“When people see how law relates to the technology they use, the food they eat, and just about every topic imaginable, that’s a real light bulb moment for them,” explains Kathleen M. Smith, J.D., director of the Fox Rothschild Center of Law and Society, who launched Law and Society Week with husband David Freeman J.D., an associate professor of Social Science at the College.

On Thursday, March 2, Law and Society week will hold a panel discussion on the future of a Marijuana Law in Pennsylvania from 6 to 7:30 p.m. at Winnet Student Life Building, Great Hall, Room S2-19. A complete list of events and activities is available on the website.