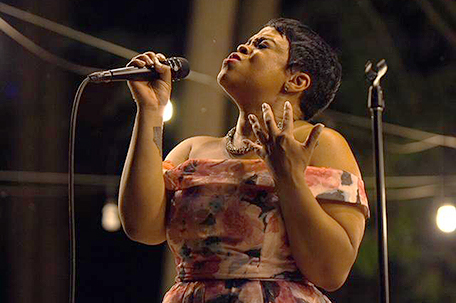 Talese was frequently featured among the performers at the legendary Five Spot and participated in “Black Lily,” where many of Philadelphia’s favorite natives launched their music careers. After lending her voice as a background singer for many years to Bilal, Vivian Green, Jaguar Wright and performing internationally with artists like Joy Denelane, Talese took over the driver’s seat as a solo artist. Her vocal abilities have paved the way for her to travel the globe performing with world-renowned ensembles and orchestras such as the Cleveland Orchestra, the Cleveland Jazz Heritage Orchestra, the Moses Hogan Chorale, and the Mozarteum Orchestra of Salzburg.

Thankfully, jazz fans in the tri-state area can take part in her next performance… a One Night Only show where Talese will pay homage to the incomparable Nancy Wilson at The Kimmel Center’s Perelman Theater.

In a conversation with the SUN, she shared her excitement for the upcoming tribute.

Talese grew up in a musically gifted family. Her father, who sang in a quartet with his brothers, discovered his daughter’s ability to sing and harmonize at age 7. Shortly thereafter, Talese joined a group called “The Singing Angels” where she performed bringing the joy of live music to nursing homes.

Talese continued perfecting her craft while attending the Cleveland School of the Arts. During her high school years, Talese’s love for jazz was developed after receiving a compilation album that included jazz legends Sarah Vaughan and Nina Simone. The flames of that passion continued to be fanned with Talese being accepted and later graduating from a The University of The Arts with a Bachelor of Music degree in jazz vocal performance. Since her entrance into the music world, she has cultivated a sound and styling that is uniquely her own. That style and sound continues to be appreciated by industry professionals and lovers of jazz respectively. Talese’s debut album “Gorgeous Chaos” features the likes of Robert Glasper, Vivian Green, Eric Wortham II, Christian McBride and many more. Talese described one of many reasons why she fell in love with jazz.

“Jazz is one of the few genres where it’s not necessarily about a trend or popularity contest… You actually have to be good at what you do and have something that is intrinsically you,” she said

Jazz is an extremely complex form of music and expression, wrapped in history and culture that has served as a template for various genres of music since its inception. Like all singers, Talese’s voice has been shaped by a number of artists, among them Nancy Wilson. As it pertains to jazz singers and the female greats, Talese shared her thoughts on why it was important for her to honor Wilson with a tribute.

“Nancy Wilson is just iconic! Upon discovering her in my later high school years, I really appreciated her grace, wit, poise and the way she told a story.” Talese said. “She has what I like to call that quiet sexiness. I always admired that in women because to me that’s the best kind of sexy. That’s just how she presented herself on stage but it manifested itself in her repertoire, in the songs she chose… and the sets that she put together were so inspiring! She also had a variety show that I didn’t know [about] until a year ago. I looked up some of the material she sang and it was songs like, ‘Something Happens to Me’, ‘You Better Go’, ‘You Can Have Him’, and ‘Don’t Talk Just Sing’. So not only was she this class act, but she was funny! She represented the Black woman that they didn’t allow to be seen on TV. They didn’t want that Black woman to be seen in mass media. They wanted to show Black women as homemakers only or maids. But here you have this woman with undeniable beauty and intellect and she was a boss!”

“As women in music,” Talese added, “we are not often portrayed as artists who can also be cerebral… thinking with our left brain and right brain, but Nancy Wilson was one of those folks that did that. Some of my other favorite vocalists like Ella Fitzgerald, Sarah Vaughan, Dinah Washington, Shirley Bassey, and Barbra Streisand have had tons and tons of tributes to them… but I wasn’t seeing people pay homage to Nancy Wilson and I wanted to do that.”

There is no doubt that Talese will continue to wow audiences with her vocal prowess. To listen to her album “Gorgeous Chaos,”stay up to date with upcoming performances and to connect with her via social media, visit www.laurintalese.com.

Fans of Nancy Wilson have lots to look forward to during Talese’s tribute. She plans to sing some of Wilson’s greatest hits like “Guess Who I Saw Today”, “How Glad I Am”, “Save Your Love For Me” (Talese’s favorite); songs from her variety show, a few obscure numbers and a wide range of tunes that span the entirety of Wilson’s career from start to finish.

Laurin Talese will be performing “Nancy Wilson: The Song Stylist” at The Kimmel Center’s Perelman Theater on Saturday, February 10th at 8pm. Tickets are available at www.kimmelcenter.org. This is a show you do not want to miss!